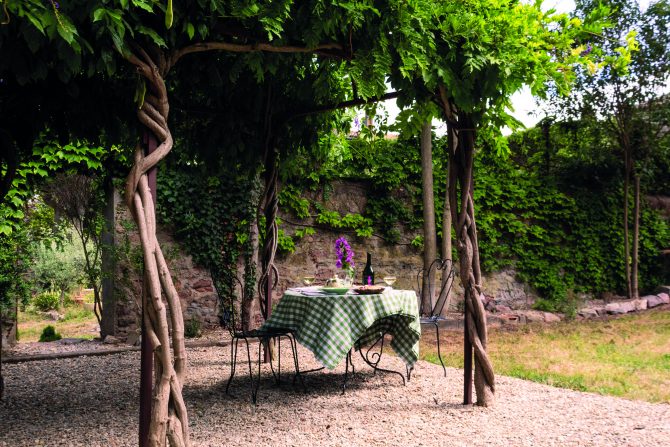 Rebecca Hill opened her B&B near Carcassonne in southwest France last year. She had never run a hotel before – let alone started a business during a pandemic in a foreign country. She didn’t let that stop her though, she tells Nicola Venning

I gave up a fabulous job that I really, really, loved but felt I was spending my life in a glass box,” says Rebecca, who used to work as a marketing director in the UK. “There came a point when I just didn’t want to do it anymore.”

Despite splitting from her partner, Rebecca decided to go ahead and buy the chambres d’hôte, Le Chai de Marguerite, in Peyriac, a village in the sunny rolling countryside of the wine-growing Minervois. “There is a little bit of foolhardiness in what I have done. A little bit of sticking two fingers up at the world. Most people I know do this as a couple, which is easier,” she says. Though it was daunting doing it on her own, she did have one or two aces up her sleeve.

Rebecca had lived in France for 15 years when she was married in the 1990s and spoke French well. “I did a marketing diploma in French, worked in a French company and was married to a French man.” All of which was very helpful when it came to starting a new business in France. Also, she had shrewdly moved before Brexit happened on January 31 2020 and, given that she was living in the EU, benefited from the Withdrawal Agreement. “My status now is that I am a resident in France. I have the carte de séjour (French residence permit) and am allowed to stay for five years. I can then renew it,” she says.

The B&B was the first property Rebecca viewed and she knew instantly that it was what she wanted: it was an hour and a half from Perpignan and the coast in an unspoilt French wine village, and was a beautiful home.

“It was built by someone with a certain amount of means. I fell in love with it because it had been renovated quite well and still has a lot of original features. Most of the rooms have decorative cement tiles. Every room still has a marble fireplace and is decorated in an interesting way with lots of antiques,” she says.

The house had been successfully run as a B&B by the previous owner, an antiques collector, but it was originally built by a wine merchant in the late 19th century. Two sets of bedrooms are connected Jack-and-Jill rooms, linked by a bathroom, and can be turned into large family suites. This gives the B&B a lot of flexibility.

There is also a lot of unused space, such as a garage and stables, which Rebecca is currently redeveloping. However, what really sealed the deal was the large garden with its small pool. “I have always wanted a large garden,” she explains.

The house was also within her price range. According to Home Hunts, property finders based in the South of France, homes in the Minervois area of the Languedoc are roughly 40-50 per cent cheaper than their equivalents on the coast. “It’s not Provence – it’s not rich, but the flip side is that it’s quite unspoilt and there are interesting people in agriculture here,” says Rebecca.

She paid £493,000 for the property through Leggett Immobilier, though other costs included notary fees and some of the antique furniture. Rebecca bought several of the larger pieces including the wardrobes, bedside tables and chests of drawers. “They are all 19th-century re-interpretations of the Louis XV and Louis XVI style. I also bought some of the lovely chandeliers and pictures.”

Before opening, Rebecca decided to renew the tired kitchen and renovate the utility room, but unfortunately, “no one was allowed to work during the first pandemic and that put everyone behind”, she says.

A shortage of builders in France

There was – and still is – a huge demand for builders, with good ones being booked up for months ahead. “Originally I thought the renovations would be done by April 2021; six months later, there are still little bits to be done,” she says. “What has been challenging has been making decisions about the building. I have no real experience of renovating a house.”

Most of her builders came through recommendation, and all the major work –such as the plumbing and electrics – has been done by French builders who were covered by the 10-year insurance policy responsabilité décennale, which they pay for. “When you sell your house, you have to give a copy of the décennale to the notary. So if something goes wrong after you have sold, the liability is with the tradesman. If you don’t have that décennale, the liability is with you – even if you have sold the house,” she explains.

Even though the renovations were not finished, Rebecca opened for business as soon as the lockdown restrictions lifted. “If I had guests, I asked the builders (who arrived at 6.30am), not to do anything loud first thing. I also served breakfast in the garden, so it was not an issue. They were working in an area that was not too close to the guests.”

Rebecca uses Booking.com for reservations and lists her B&B on the free websites of the regional tourism authority and village. She also has her own website, which she regularly updates. “I would say most of my guests (who have been mainly French) have found me because they need to be in the area. What I have to do, in order to drive business, is to reach people who have not thought of coming here in the first place.” Rebecca does this via Facebook and Instagram (@lechaidemarguerite).

Maintaining the decorative flair of the house has been as important as ensuring comfort. “Guests like the fact that the B&B is old and different. I have had no complaints that everything creaks. The beds, however, are new and good quality!”

Rebecca bought a lot of the original china and added her own blue-and-white set. “It came from my mother; it’s 19th-century style and is in keeping with the house.”

She says that giving “a sense of service” and ensuring people feel welcomed is vital when you’re running a B&B. “If you are allowing people into your space, you have to be prepared to talk to them. Some people find it difficult. I don’t mind it at all.”

Rebecca provides details of local events, sites of interest and restaurants and will make reservations for guests if required. She also works with a local traiteur (caterer) who provides cooked evening meals, if requested.

Her experience of marketing and event organisation has been useful in ensuring that everything runs smoothly. However, the day-to-day physical work of cleaning rooms, washing sheets (often daily), shopping and “turning beds” is time-consuming. “Nobody gets rich running a B&B,” she says. Letting the house as a self-catering holiday home would, she has realised, be less work while generating a similar income. However, she is hopeful of a busy summer in 2022 – in particular, the return of visitors from the UK.

“It’s a means to an end for a particular lifestyle,” Rebecca says. “I want to live in the sun, in a big house with a big garden. If I can pay the bills, I am happy.”

Looking to move to Aude?

Located in the sunny southwest of France, this département in the Occitanie region is also known as Cathar country after the religious order active here in the 12th century. It’s a mix of landscapes from coastal lakes to shrublands, with the Black Mountains to the north and west and Carcassonne at its heart. Aude’s Castelnaudary cassoulet is a culinary classic. Eat it with the local Fitou, Corbières or Minervois wines.

Browse Properties for sale in Aude

Previous Article Fibre Internet in France
Next Article What Planning Permission do I Need? Building a Gite in France