French cuisine with an English accent 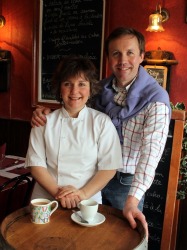 In 2002 Patrick and Nicky Hilyer and their two young children swapped a settled family life in Saffron Walden (North Essex) for an exciting but unpredictable future: running a restaurant in Lower Normandy. Patrick describes how they became restaurateurs…

It began, like so many of life’s big decisions, with a frivolous conversation over a bottle of wine. I don’t know if it was the sunshine, the delicious grilled sardines or the rosé we were drinking, but by the time we’d finished our alfresco lunch a crazy idea had evolved into a plan: we decided to move to France.

That was 10 years ago and a lot has changed in the last decade. Our move was made easier as we already owned a holiday home near Saint Lô in the Manche departement. That, and the fact that Nicky’s parents were also expat residents, made things far less daunting. And after all, Normandy was only a couple of hours’ ferry journey away…

But after a few months of spending and not earning, the tricky problem of how to make a living became a more frequent mealtime topic. We’d always talked of owning a restaurant (Nicky is a qualified chef), and buying a small town-centre bistro seemed like a logical entrée into the French workplace. 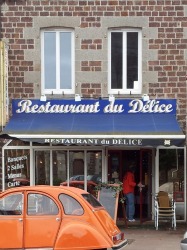 We scoured the small ads in the local papers and spotted a little restaurant for sale in the nearby town of Gavray. Le Délice seemed perfect: not too big and right in the middle of a busy country market town – opposite the church, and sandwiched between the bar and the pharmacy.

Buying the business (leasehold) was surprisingly straightforward. Our notaire put us in touch with a good accountant who explained the previous owner’s balance sheets to us, and after a successful negotiation we concluded the deal. The whole process wasn’t much more complicated than buying a house.

The notary and the accountant registered us with all the official bodies, created our EURL (a limited company owned by one person), and set us up with the most tax-efficient fiscal status. All we had to do was open a business account at the bank and get cooking!

We opened on the day of the annual sheep fair. Monsieur le Maire and a large group of well-to-do farmers came for lunch and all ate cod & chips! Our culinary repertoire soon became influenced by Normandy’s tasty regional specialities, and dishes like Poule au Pot, Blanquette de Veau, Moules Marinière à la Crème and even Tripes à la Mode de Caen became regular plats du jour. We quickly learned to speak French, not because we found it easy but because we had to!

Running the restaurant wasn’t always plain sailing, but so far we’ve managed to weather the storms and cope with the doldrums. So here are our top tips for anyone thinking of upping sticks and cooking for the French: 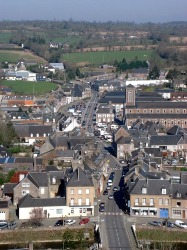 1. Learn to speak French; the majority of your clients will not speak English.

2. Find a helpful and trustworthy accountant (preferably – but not necessarily – one who speaks English), and make sure you understand your tax liabilities.

3. Choose a location where you can develop a strong local clientele as well as getting regular passing trade.

4. To thine own self be true: only do what you can do, and make sure you do it well.

5. Employ only a small permanent team (the smaller the better), and think about taking on staff on seasonal or temporary contracts.

Nearly 10 years on, the townsfolk are still eating with us – some of them several times a week – and they all seem to enjoy the accent anglais of the menu. Nicky’s cuisine has earned the restaurant several regional food awards and she now runs a monthly cookery class for a group of local gourmets – all of whom are French.

Finally, in this job you can’t expect riches. But if you’re looking for a steady income, and you measure your quality of life by factors like friendship, family and fab food, then why not buy a restaurant in France? Allez! À la cuisine!