Vide-greniers: how to bag a bargain in France 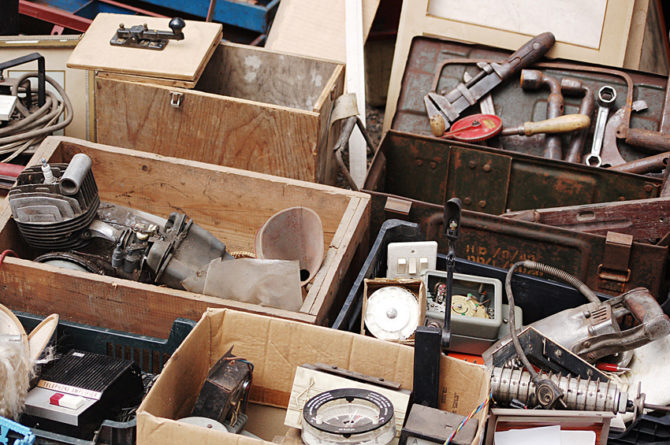 There’s a fine and fluctuating line between clutter and collecting which is, in our household at any rate, often crossed. As an ardent and somewhat militant minimalist the prospect of a morning rummaging through the jetsam and flotsam of someone’s attic or garage clearance is anathema but in the spirit of for better or for worse I go along, as keenly as I can, to the latest vide-grenier hoping against hope to come away with only empty bags.

It is claimed that one man’s junk is another’s treasure and this no where better illustrated than at a vide-grenier, literally “attic clearance” and the French equivalent of a car-boot. We arrived just before nine-o-clock – to bag the best bargains or not – and parked in the car-park of the local Marie. There were, as ever, no signs indicating where the booty was situated so we just followed people who looked as if they knew where they were headed. This is not always a good idea! Eventually our guides stopped at the town’s football pitches where large groups of men were either gathered around a bar drinking, even at this hour, what appeared to be white wine but was most probably some Gallic moonshine or playing a game which seemed like quoits. There was no evidence of clutter or collectables. I could feel my mood lightening.

Unfortunately my wife caught sight of something and disappeared down a steep grassy bank to another football pitch. My heart sunk and a wave of despondency swept over me. I had stood on this shore of shifting sands so many times before. I had that sinking feeling.

The first stall we felt obliged to stop at – largely because there were so many locals besieging it – had a curious collection of badly-broken and rusting tools laid out on blankets – picks, spades, hammers, padlocks (which did not appear to have keys) and piles of unidentifiable shrapnel that might well be mistaken- or perhaps was cunningly intended to resemble some post-modernist sculpture. Surprisingly this seemed very popular with the locals. I had heard that rusting iron placed at the base of a hydrangea plants improved the ph of the soil and so perhaps this accounted for the popularity of the stall. I doubt it!

Then a stall with a rather eclectic collection of odds and sods: hats on mannequins heads, some strangely bearded, worse for wear children’s’ clothes, old and yellowed newspapers, worn-down shoes, a solitary roller-skate, half-tins of paint, empty glass bottles, dog-eared books – including a Vinny Jones autobiography in English and several Tour de France fridge magnets – which held some puerile fascination for me. I had seen better bargains in the skips at the local dechetterie.

I was, however, determined not to buy anything and thereby contribute to our blossoming clutter mountain but my resolve was severely tested at one stall by a Systeme U cycling shirt, faded and over-sized, but appealing because it was the team which the late great French two-time Tour de France winner Laurent Fignon had once rode for. Remarkably I resisted. My wife, however, was not so disciplined. She bought a collection of French childrens encyclopaedias, wooden boxes, attractively painted, to store pomes de terre and a framed print of Monet’s garden. What a bargain!

Rather worryingly on the way home she was already scanning the pages of the official vide-grenier handbook for our next up-cycling foray.

Previous Article Audierne, Brittany – How We Forgot Paradise
Next Article Holiday homes in France to be hit with new tax