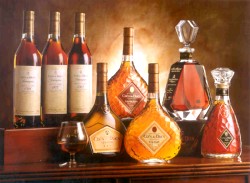 Armagnac is the only true rival to Cognac for recognition as the finest producer of brandy in the world. Along with Cognac and Jerez in Spain, it is one of only three officially demarcated brandy regions in Europe.

Its quantity of production is significantly lower than that of the Cognac region; for every six bottles of Armagnac sold around the world there are one hundred bottles of cognac sold.

Armagnac has been making brandy for around 200 years longer than Cognac.

Armagnac, or rather the counts of Armagnac, the Albrets, were an important political force in France in the 14th, 15th & 16th Centuries, they created a political party opposed to the absolute power of the Monarchy and were responsible for the introduction of Protestantism into the South West of France. It was during their rule of Armagnac and Bearn that the local ‘Eau-de-Vie’ began to be commercialised and sold in the rest of France as ‘Armagnac’.

The invention of the drink is attributed to Arnaud de Villeneuve (now Villeneuve-de-Marsan in the Armagnac producing region of Chalosse), an alchemist who died in 1311.

Legend has it that France’s King Henry IV (1553 – 1610) had Armagnac and garlic placed on his lips by his grandfather on the day he was born. He is said to “have drawn wisdom and strength for his whole life” from that experience. 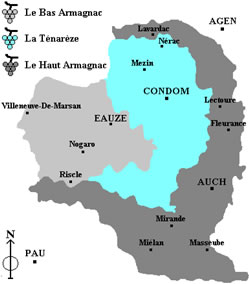 Armagnac can now only be produced from one of 10 specified strains of grape, cultivated over an area that covers the departements of the Gers, Landes and Lot-et-Garonne, centred around Aire sur L’Adour and Eauze. The Armagnac (drink) is a major export of France, with more than half the number of bottles produced annually going abroad (Japan, Great Britain, Germany and the USA being the major importers).

Only a part of this historical region is permitted to grow the grapes that are used in the manufacture of brandy that may be labelled with the Armagnac name. This area was officially demarcated when Armagnac was granted AOC status in 1936.

The official production area is divided into three districts which lie in the departements of Gers, Landes and Lot-et-Garonne. These are:

Each of these areas is controlled by separate appellation regulations. Although the term “bas” means lower in French, the best armagnacs are principally produced in Bas Armagnac.

The production of Armagnac differs in several ways from that of Cognac and it is the oldest eau de vie dating back to the 12th century. Armagnac is only distilled once and at a lower temperature than Cognac, meaning that the former retains more of the fruit character, whereas Cognac’s second distillation results in a lower balance. Armagnacs are aged for nearly the same period as Cognac, which has a significant impact on the grape once it has been distilled. Armagnac is aged in limousine oak casks giving them nice and delicate colour, as well as an intricate flavor more complex than that of Cognac.

The ageing process takes between 4 and 20 years. The amount of ageing dictates the colour and strength of the Armagnac – older Armagnac is more amber-coloured and less alcoholic (loosing 1 degree every 3 years).

Ageing Requirements for Armagnac are: 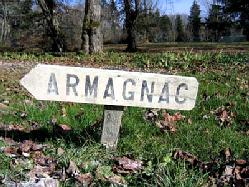 Ten different varieties of grape are authorised for use in the production of Armagnac. Of these, four form the principal part:

The main producers of Armagnac are: