The black wine of Cahors 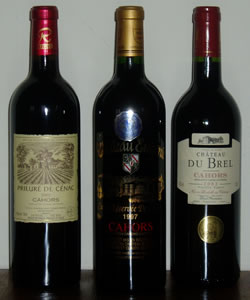 An undiscovered French red wine, revered by popes and princes

Why black? Principally because it is almost black, just hold a bottle up to the light and you’ll see into its deliciously inky depths. Cahors red wines are reputedly the darkest in the world; they are also some of the strongest and richest and will keep for years.

Cahors has a fascinating but somewhat turbulent history; the vineyards were amongst the first planted in France by the Roman Emperors, more than two thousand years ago and they were an immediate hit. However as the Empire grew it became abundantly clear that production of wheat would need to be stepped up in order to feed the growing masses. France was to be the breadbasket of the Roman Empire and the vines, splendid though they were, would have to go. In the third century one of the more discerning Emperors, Probus, decided that enough was enough and the time had come to reinstate the delicious red wine. He is still a much-celebrated figure in winemaking circles today and one of the distinguished Chateaux of the region has a rather splendid red wine named Prince Probus in his honour. 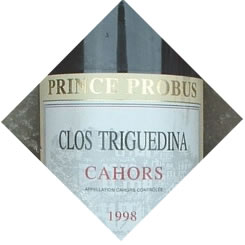 The great renaissance of Cahors red wine had begun and it was to become one of the most sought after French wines. The Russian Tsars loved it. Peter the Great insisted that the tannic content cured his ulcer and helped his delicate stomach… The Roman Emperors also renewed their interest and even the clergy became alerted to the possibility of a quick, stiff tipple in the communion cup.

At up to 15% Cahors wine was not only the darkest; it was also one of the strongest red wines available. Pope John XXII, a Cahors man, born and bred did much to promote this revival in the fourteenth century and the nearby port of Bordeaux began to take an equally healthy interest. As it’s own red wines became increasingly popular as the much loved and greatly revered claret of the 17th, 18th and 19th centuries, the stronger and richer Cahors vintages were (reputedly) often used to bolster the lucrative exports. 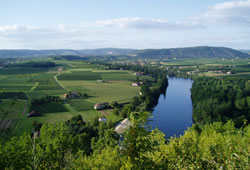 At the end of the nineteenth century an absolute catastrophe occurred. All the Cahors vineyards were wiped out by the ravages of phylloxera and the precious vines that had poured into the goblets of the finest tables in Europe, were lost. Undaunted the vignerons replanted, and throughout the troublesome times of the early twentieth century they nurtured their vines and re-established their reputation.

The Quercy region of France is a land of extreme weather conditions. Summers are very hot and dry, winters are cold and dry, and they can be very cold indeed. In 1956 Mother Nature decided to remind us of this salient fact. The big freeze in February of that fateful year was so bad and so long that once again the vines were virtually wiped out. The only known vineyards to survive are at Clos de Gamot near Prayssac, and you can go and see them if you wish. The domaine is open to the public and the Jouffreau family, who’ve been making fabulous red wines there for over 300 years, will be delighted to show you around. The vines themselves are said to be over a hundred years old. 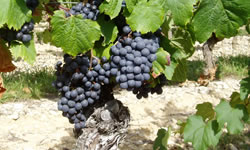 The staunch peasants of the region once more set about replanting their vineyards. They used the strong tannic Auxerrois grape as the backbone of their wine, sometimes mixed with a little Merlot or Tannat for more fruity modern tastes. The Roman emperors wouldn’t have had any old chariot with that! They liked their red wines strong and dark, and they weren’t in the least bothered about unnecessary fripperies like bouquet and fruity flavour.

The French government thought otherwise and in 1971 decided to recognise this black jewel in their non-existent crown by awarding the region AOC status, since then there has been no looking back. There are still only 4,000 hectares laid to vine in the area permitted by AOC standards, which makes Cahors a comparatively rare French wine and is probably why it’s so difficult to find in British shops. The quality however is without doubt the very highest. It still graces the finest restaurant tables and dining rooms in the world, but it’s comparatively inexpensive – at the moment – so now is the time to invest in some. It’s available just about everywhere in the Quercy. 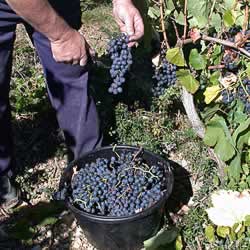 Why not visit some of the two hundred or so domaines and Chateaux in the area. Almost all will sell direct to the public, they will often offer you advice, a guide to the vintages and a degustation – eat a good breakfast before you start! Some will even offer a tour of the vineyards. It’s a wonderful way to spend a day.

Having made your selection and restocked the cave – or cupboard under the stairs – take a bottle out onto a typical Quercynoise terrace in the early evening sun; perhaps with a baguette from one of the village boulangeries with maybe a couple of rounds of Rocamadour fromage de chevre and a bowl of olives. Ease out the cork and pour a deep rich glassful. It’s one of the great pleasures of life in France and I commend it to you. Sante!

See below for a selection of personal favourites

Chateau Mercues dominates the Cahors skyline. It is one of the grand marques and is open to the public daily from Easter to the end of October.

Barring the bit about the skyline, the same can be said for Lagrezette. It too is a real Chateau although as it’s a private residence the Chateau itself is not open to the public. The vineyards however are open daily.

Clos de Gamot I have already mentioned and Chateau de Cayrou is another domaine owned by the same family. Both are open daily (not Sunday) from Easter to the end of October.

Chateau Eugenie is a domaine perched high above the Lot valley on the seared stone-scattered hilltops. It’s open Monday to Friday in July and August.

Clos Triguedina I’ve also mentioned. It’s here that you’ll find good old Prince Probus. This is a highly rated wine, not very easy to find elsewhere and well worth a trip to the vineyard. Open Monday to Friday.

I’ve saved the best for last. Clos Siguier is an inexpensive wine, but a little treasure. You can find it in the markets at times, you can buy it at the vineyard of course, but during high season you can also buy it at the roadside – between the villages of Sauzet and St Matre – look out for an unobtrusive little hut under the trees. There you will find a little old lady who will enthusiastically arrange an impromptu degustastion for you. It could only happen in France.

This is a highly personal selection of course, and there are many others that are equally worthy of notice. The best ones to try may be those nearest to you.

How to taste wine