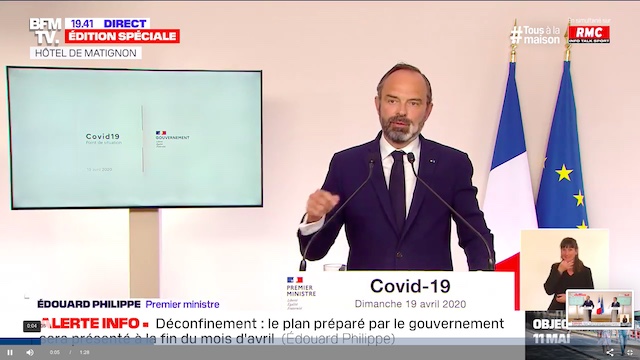 Stay informed with the FrenchEntrée Covid-19 news round up, including the Prime Minister’s latest update, most recent victim and patient figures, lockdown tales from around the country, and the likely conditions and measures to be put in place post-lockdown.

The Prime Minister held a televised news conference for almost two hours on Sunday evening, when he was joined by Health Minister Olivier Véran and the Director General of Health, Jérôme Salomon, for a detailed ‘situation report’ on the Covid-19 pandemic in France.

This included information on how deconfinement might pan out, with a focus on “respect for barrier measures”, the “multiplication of rapid tests” and the “isolation of virus carriers”. He said a plan would be made public “within 15 days”.

“We’re going to have to learn to live with the virus,” said Mr Philippe. “Our life after May 11 won’t be exactly the life before the lockdown. Not right away, and probably not for a long time yet,” he added. He reminded people of the importance of maintaining “barrier gestures” and “social distancing” and said that businesses currently closed due to the health crisis will only be able to reopen under these conditions.

“Whatever the business in question”, queues will have to be organised so as to respect a minimum distance of more than one metre between customers, and measures such as “the provision of hydro-alcoholic gel at the entrance to the store or just before the checkout will have to be implemented”, the Prime Minister said.

Talking about cafés, bars and restaurants, he said they will remain closed because their activity “does not initially make it possible to limit the circulation of the virus”. It is “a heartbreak and considerable anguish” for “all those who live from this activity”, he conceded.

He warned that the economic crisis is only at its “beginning”, and referred to “the strongest recession since 1945” with a drop in GDP of “nearly 10%”.

Mr Philippe also said that there would be no full testing of asymptomatic French people, rather that only symptomatic people and people who have been in “contact” with sick people will be tested after what France calls “déconfinement” begins.

Schools will not automatically re-open on May 11 – the end date of the most recent confinement extension announced by president Macron last week. Among the hypotheses envisaged are: that schools in areas with the fewest Covid-19 cases could open “more quickly” or “more widely”; “half classes” could take turns “every other week”; and finally, that school premises could be used “in a different way, with the use of larger spaces than simple classes to teach”.

Visiting relatives in in retirement homes

The Minister of Health, Olivier Véran, announced the introduction of “visiting rights”, as of Monday (yesterday), in Ehpads (retirment homes) and establishments that look after people with disabilities. This “exceptional” right of access will be “at the request of the resident”, and will not concern “no more than two persons [of the resident’s family] at the same time”.

Practical news in brief for those living in France

US online retail giant Amazon has closed six of its French warehouses, following a stand-off with unions over sanitary conditions at the places of work. Employees are concerned about potential contagion whilst packing and moving parcels.
Last week, a French court last week ordered the company to restrict its deliveries to essentials such as groceries and medical supplies while it carries out safety checks.
But Amazon took things a step further and stopped activity completely at six warehouses, saying that the definition of essential goods was not clear and it could not risk being fined. A court appeal is due today, April 21.

The city of Montpellier (Hérault) has welcomed 450 French passengers from the cruise liner Costa Deliziosa, which left Italy in January and sailed around the world. The news comes after the Bouches-du-Rhône prefecture refused to let the ship dock in Marseille. The boat’s company made assurances that nobody onboard is affected by the coronavirus, but the Montpellier mayor said everyone would be tested then lodged before completing their onward journey home.

Singer Cabrel: “I hope we learn from this”

Legendary French singer-songwriter Francis Cabrel, in confinement at home in Astaffort, Lot-et-Garonne told France Bleu Périgord that he is much more optimistic than he was during the first fortnight of the confinement. “There’ll be a world afterwards,” he said. “I hope we’ll learn from this, of course we’ll live a little differently if we can.”
He said the confinement is “very, very, very damaging and serious for the whole entertainment family in general. That’s an entire economy that’s faltering. Hopefully, it’ll happen again in the autumn.”
He says he passes his time playing music. “I play a lot, a lot, a lot of guitar and piano”.
Every night, he sings some of his lesser known sings – what he calls forgotten “nuggets” – for fans via the Baboo Music website and on social networks.

You can view his filmed performances here.