Coronavirus in France: News Update, May 5 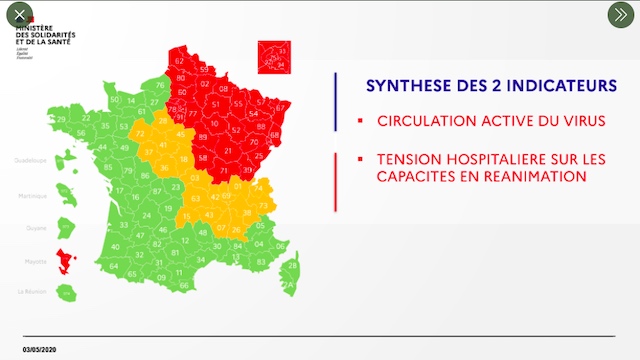 Here is your FrenchEntrée Covid-19 news round up from the last seven days, including conditions for déconfinement as the May 11 deadline approaches, a new map showing which departments are least and most affected by Covid-19, news on quarantine for those visiting France, and fines for anyone not wearing a mask on public transport and planes.

Here are some of the main developments from the last seven days.

Since March 1, 24,895 French people have died from Covid-19 in hospitals and care homes (the figure does not include deaths at home). There have been a total of 131, 287 confirmed cases and currently 25,815 hospitalisations. See the latest map of hospitalisations here.

France’s health minster Olivier Véran said in an interview with Le Parisien newspaper on Sunday that the May 11 ‘déconfinement’ date would be delayed should conditions not be met to roll out post-lockdown life safely – namely if the number of new Covid-19 patients was too high.

The country “is going to have to live with this damn virus, it’s a long-distance run,” he said.

“If the containment is well respected until the end, the lid will have been put on the pot of the epidemic, and we will be able to deconfine gradually in the best conditions”, he explained. “If not, and if the number of new patients is too high, the date of lifting the containment could be questioned and will be assessed according to the departments.”

In his presentation of the exit strategy, the Prime Minister, Edouard Philippe, said last Tuesday that if a threshold of 3,000 additional cases per day was exceeded, the lockdown would continue. There was an average of 1,132 additional cases every 24 hours up to Saturday night.

From 11 May, 100 million masks per week will be distributed free of charge to health professionals to enable them to resume “as normal an activity as possible”, the health minister said. “Until now, 45 million masks a week were being removed for health professionals,” he said. “Some professions, which cannot work without them, such as dentists, will have FFP2 masks. For doctors, pharmacists and nurses, it will be three to four surgical or FFP2 masks a day.”

News and practical tips for those living in France

Among the public spaces that will once again be open to the public on May 11 are its forests, offering residents across the country the chance to enjoy some much-missed walks (whilst respecting social distancing measures). The government tweeted a list of places that would be open, among them all forests – whether they are in departments with low or high epidemic circulation.

Forests, along with cemeteries, small museums, médiathèques and libraries, are the only public places that will be open to everyone post-May 11 regardless of the Covid-19 ‘colour code’ of your department. Parks and gardens will be open to those living in a ‘green’ department.

The full list (in French) of do’s and don’ts after May 11 is available here.

Two Bergerac museums to reopen on May 12

Good news for FrenchEntrée readers in Dordogne – two of Bergerac’s museums will be reopening to the public next Tuesday May 12, albeit with limited offerings and restricted visitor numbers.

The Tobacco Museum and the Costi Museum of Bergerac will open from Tuesday to Friday from 1.30pm to 6pm and on Saturday, Sunday and public holidays from 2pm to 6pm.

Numerous activities and workshops will also be available via Facebook.