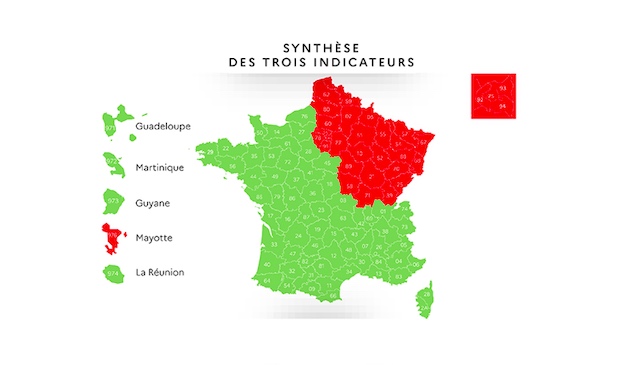 “The country is divided in two,” Prime Minister Edouard Philippe said yesterday, as he unveiled the map of France by department, which will dictate Monday’s “very progressive” end of lockdown.

All departments in the four regions of France’s northeastern quarter (Hauts-de-France, Grand-Est, Bourgogne-Franche-Comté and Ile-de-France) are classified as red – signifying where the epidemic has been most virulent since March. Of France’s overseas territories, only Mayotte is classified as red.

“We are in a position to validate the end of lockdown throughout metropolitan France, but some departments have less good results,” the Prime Minister said. Ile-de-France residents can expect “reinforced discipline” to be implemented because of the continued presence of Covid-19.

The colour of the departments is assigned according to three main criteria: active circulation of the virus, pressure on hospital intensive care units and the capacity for Covid-19 screening tests by nasal swab. The “active circulation of the virus” is calculated by the Ministry of Health, based solely on the proportion of emergency room visits for a suspected case of Covid-19 in each department.

What does ‘green’ and red’ mean for residents?

Several key differences remain at the local level between “green” and “red” departments: in the “green” departments, parks and gardens can be reopened from 11 May. The same goes for collèges, which will be able to take in 6th and 5th grade pupils from 18 May. After three permanently “green” weeks, the government will be able to “envisage” a new stage for these departments, namely the reopening of cafés and restaurants as well as secondary schools. This will not be possible for “red” departments.

For these “red” departments, local authorities, such as elected representatives and prefects, will also have “the possibility of closing schools, closing a certain number of shops or outside locations if necessary,” Health Minister Olivier Véran said on franceinfo.

New rules for travel from May 11

90% of primary schools to reopen

Mr Philippe said that teachers will go back to work on Monday, May 11 and younger children can attend school the day after (the latter is at their parents’ discretion), with a maximum of 10 children in maternelle classes and 15 in école élementaire.

Lycées could be open by June, subject to further assessments being made at the end of May.