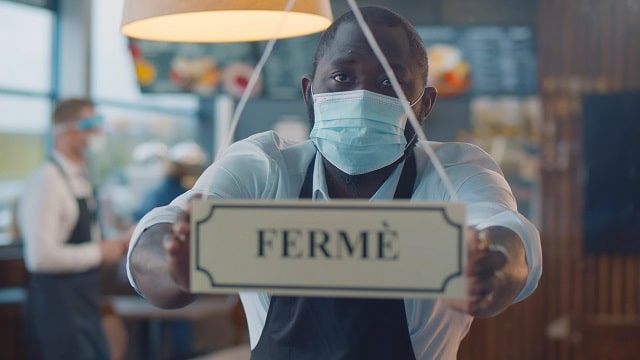 Latest figures from Santé Public France concerning the Covid-19 epidemic revealed 215 deaths in hospitals in the 24 hours to Sunday, bringing to 48,732 the total number of deaths. There were 13,157 new cases confirmed in the same period.

While the number of new cases and hospitalisations is decreasing, France is still in a phase of ‘active circulation of the virus’. Intensive care numbers decreased for the 6th consecutive day.

100 departments are currently in a situation of “high vulnerability”, while the regions of Ile-de-France, Auvergne-Rhône-Alpes, Hauts-de-France and Provence-Alpes Côtes d’Azur still have the highest number of hospitalisations.

Hospitalisation figures and deaths in the 24 hours to Sunday, by region:

In his next Covid-19 themed television address to the nation, scheduled for tonight at 8pm (Tuesday November 24), French President Emmanuel Macron says he wants to help the French people to have hope.

In the address, he is expected to announce new confinement conditions in the fight against the second wave of Covid-19.

Speaking to newspaper Le Journal du dimanche on Sunday, Macron said he wishes to give the French people “consistency, clarity, a path”.

“Nothing is worse than uncertainty and the impression of endless gloom,” he added.

“It is difficult, because the pandemic is inherently unpredictable and global,” explained the President, “but it is the key to trust, which itself is the key to success.”

Easing of confinement in three stages

At this stage, the government does not envisage the end of containment, as Health Minister Olivier Véran pointed out in the same article: “Today, the level of circulation of the virus in the country is the same as at the time of the curfew. There is no question of deconfinement”.

However, there is expected to be an easing of containment in three steps in coming weeks. The “easing (…) will be done in three stages with regard to health developments and risks associated with certain activities: first around December 1, then before the year-end holidays, then from January 2021,” said government spokesman Gabriel Attal, also in the same newspaper.

The first of these steps – the reopening of shops “around December 1” is almost certain to happen – but with adapted sanitary protocols (possibly 8m² per customer, as against 4m² previously). However “some establishments, such as cafés, bars and restaurants, will continue to experience restrictions,” said Mr Attal.

The move is expected to include the reopening of so-called “non-essential” shops, bookshops, clothing retailers, plus estate agencies.

A decision on how ski resorts may re-open before Christmas is also expected in the next ten days, while a move to let cultural spaces like museums re-open with limited visitors is also pending.

French food giant Danone, whose sales have been badly hit by the Covid-19 pandemic, is set to cut up to 2,000 jobs at its headquarters in France and abroad, in order to “simplify” its organisation and return to growth. The company is best known for its array of dairy products.

In the first few months of the year, group sales declined by 5.4% to €18 billion.

In France, “400 to 500 people”, “mainly directors and managers”, will be affected by these job cuts, Danone CEO Emmanuel Faber told AFP. The firm aims to make savings of one billion euros by 2023.

The group hopes that this decision will lead to “a reduction in its general and administrative costs of €700 million, representing about 20% of the company’s structural costs,” it said in a statement.

Among measures the company wants to introduce are “accelerating digitalisation, the robotisation of factories,” said Mr Faber, going from “half a dozen highly digitised factories” to 40 in 2023.

Calls for another bike repair boost

Bicycle industry members and environmental associations are calling on the French government to renew for 2021 the €50 euro “bicycle boost” that allowed cyclists to have their bike repaired from May this year. The offer is set to end on the last day of 2020.

The 16 associations have claimed that the measure “has already created more than 500 jobs, while giving purchasing power and mobility to nearly one million people. It embodies “the concept of solidarity economy because it promotes repair and re-employment”.

The “bicycle boost” (called the “coup de pouce vélo” in France) was launched on May 11 this year by the Ministry of Ecological and Solidarity Transition, in partnership with the Federation of Bicycle Users (FUB). It aimed to encourage the use of bicycles as a means of transportation and, since its launch, more than 900,000 bicycles have been repaired.

The Ministry of the Economy said it has no plans to extend it for the time being, so hurry if you wish to get your own bike fixed.

Click here to book an appointment at a bike shop.

The website is in French only – click on the big orange lozenge that says ‘je suis un particulier‘, then “je souhaite réparer mon vélo“.

Then put your postcode into the box found below “trouver un réparateur“.

Previous Article Mortgage Update: Can I release equity in my French home?
Next Article Vaccine and Brexit Expectations Give a Boost to the Pound