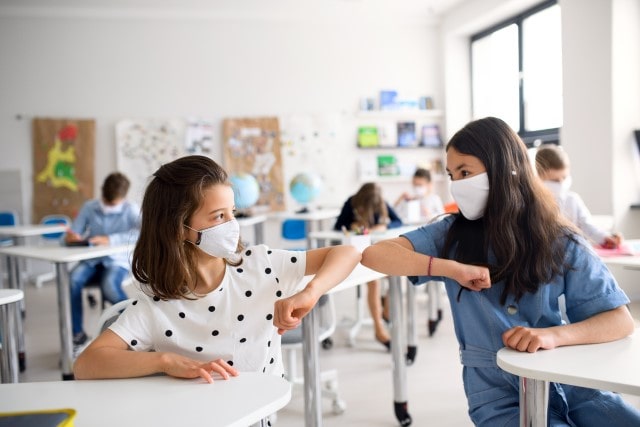 France has 2,464 new hospitalisations from the last week, including 427 serious cases in intensive care. The test positivity rate remains at 5.4%.

According to data from Santé Public France, 77 departments are currently in a vulnerable situation:

France currently has 826 cluster outbreaks, including 107 new ones.

French Prime Minister Jean Castex announced on Friday that the duration of isolation for contaminated people and those who have been in close contact with them has been reduced to seven days, from 14. He stressed that “controls” would be carried out to ensure that this period is respected.

“We know that we are contagious 48 hours before the onset of symptoms and up to ten days after,” the infectologist Anne-Claude Crémieux told franceinfo. Benjamin Davido, an infectologist at the Raymond-Poincaré hospital, added on France 2 that “most infections occur within the first five days” after the onset of symptoms. There would therefore be less risk of contamination after a week.

Priority testing for those with Covid-19 symptoms

Such is the demand by French people for a Covid-19 screening test (also called a PCR test, which does not require a prescription and is fully reimbursed) that they are facing ever-lengthening queues, as well as delays receiving the results.

As a result, Prime Minister Jean Castex has announced that laboratories will “reserve certain time slots” for people with symptoms, for those who have been in close contact with a positive case and for healthcare personnel.

After a sixth resident at a care home in Séverac d’Aveyron died of Covid-19, and with four other residents hospitalised, plus fifty others and 20 employees testing positive, the mayor launched a call for volunteers at the weekend.

About thirty people responded. “Volunteers are deployed to support the professional staff at the Ehpad, with the greatest respect to protocols. The volunteers will obviously not be in direct contact with the patients,” said the town hall.

New measures for Bordeaux and Marseille

Faced with a worrying rise in infection rates, the cities of Marseille and Bordeaux have imposed new Covid-19 related restrictions.

In Marseille, the incidence rate per 100,000 inhabitants is 275, while in Bordeaux the number is 272, well above the mainland France average, which is 70.

In Marseille and the wider Bouches-du-Rhône department, large-scale gatherings have been limited to 1,000 seated people, with a minimum one-metre distance between them. Student parties have been banned and school outings suspended, while there will be no private meetings of more than 10 people, including on beaches and in parks, in high-risk areas.

Masks are now compulsory in 27 high-risk areas in the department from 6am to 2am, except in large outdoor areas. Bars and cafés that do not enforce the rules will face closure within 48 hours, or even 24 hours.

The mayor of Basse-Goulaine, near Nantes (Loire-Atlantique), has lodged a legal complaint following a rave party that brought together nearly 2,000 people from all over France this weekend, France Bleu Loire Océan has reported.

The mayor visited the site on Monday and filed a formal legal complaint after having “noted other elements beyond the possession of the land that was invaded”. Alain Vey said he wanted to “see if there is any other damage to fences or pieces of glass that are a danger to animals in the meadows”.

The mayor says he is “angry” – speaking to France Bleu, he recalled that “there are decrees from the prefect that forbid this type of gathering. But people turn up in fields that belong to farmers or to the municipality and these spaces have been damaged – and that’s what’s lamentable”.

A new shock video released by the government, aimed at highlighting the real dangers of Covid-19 contamination by those not adhering to social distancing measures, shows a family first gathering for a woman’s birthday and then the same woman lying gravely ill in hospital three weeks later. Watch it here.

Petition launched to ‘save Brittany Ferries’

In Brittany, two departmental councillors and 11 mayors have launched an online petition, in which they ask the French state to help out Brittany Ferries, currently under financial pressure due to Covid-19.

“Major support from the State is necessary to help Brittany overcome this temporary crisis and save its jobs,” says the petition.

“Brittany Ferries is a major player in Brittany’s economy: it employs nearly 3,000 people, transports several million tourists every year, and provides opportunities for our agriculture and industry by bringing the English Channel to 160,000 trucks.

“Since its creation in 1972 by Alexis Gourvennec in Roscoff, Brittany Ferries has also been a symbol of the development of Brittany and the spirit of initiative of the Bretons.”

“Today it is going through the most serious crisis in its history. By signing this petition, we show our unanimous support for Brittany Ferries employees and management, and call on the State to intervene.”