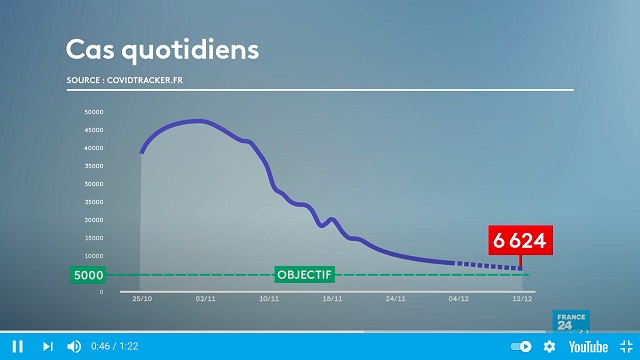 The latest report from Santé Public France revealed 366 hospital deaths in the 24 hours to Sunday. This brings the total number of Covid-19 related deaths to 55,521.

3,411 new cases were confirmed in the same 24 hours, though the figure is nowhere near complete due to reporting difficulties.

In fact, though the number of new positive cases fell sharply during the first three weeks of November, this now appears to be now stabilising at around 10,000 cases per day – far from the government’s target of 5,000 new cases per day which would have permitted the second stage of lockdown easing. There were 11,022 new cases in the preceding 24 hours to Saturday, for example.

France currently has 26,365 people hospitalised and 3,198 patients in intensive care. The test positivity rate is 10.7%.

100 departments are currently in a situation of high vulnerability, while current hospital cases and deaths in the last 24 hours by region looks like this:

As we reported last week, France’s vaccination strategy in different phases has been announced and should start in January for the most at-risk and will last through the spring for the wider public. Vaccination will be free and not mandatory.

But the upcoming second stage of easing of lockdown is another story.

Prime Minister Jean Castex is holding a press conference this Thursday, December 10, with the second phase scheduled to begin five days later. This was due to include the re-opening of museums, cinemas, theatres and concert halls, among other public spaces. It was also set to include a new curfew (9pm to 7am) with attestation forms still mandatory.

However, it is not clear if targets will be met in order to roll out the next stage of deconfinement on December 15, with the number of new Covid cases stagnating.

“Despite all our efforts, we are still facing a high risk of epidemic rebound,” warned the Director General of Health, Jerôme Salomon, during a press briefing yesterday. He added: “for a few days, the level of daily contaminations has not fallen any more”. France is “still far from the goal of passing under the bar of 5,000” contaminations per day set by the government, he said.

Mircea Sofonea, lecturer in epidemiology and the evolution of infectious diseases at the University of Montpellier, is certain that the 5,000 cases target will be missed come December 15. “This is the threshold where it is possible to control the epidemic: the ARS (regional health agencies) and health insurance funds are not overwhelmed to trace contact cases, clusters are not too numerous, we can trace the chains of contamination,” she told AFP.

Meanwhile, another leading authority also fears the worst. “We may have between 5,000 and 10,000 contaminations a day by December 15,” said Renaud Piarroux, head of the parasitology department at the La Pitié-Salpêtrière hospital in Paris. He has penned an article for Le Monde about “the risk of a third wave”.

All will become clearer this Thursday, with Castex’s announcement coming after a meeting of the government’s Defence Council on Wednesday.

Among the biggest beneficiaries of the Covid-19 crisis have been delivery companies, notably La Poste’s “Colissimo” parcel service.

La Poste expects to handle a record volume of parcels for Christmas and promises to meet all delivery times after investing €450 million in an ultra-modern site at Thillay near Roissy in the Val d’Oise.

The facility features more than a kilometre of conveyor belts, with technology in place to sort more than 30,000 parcels per hour.

9,000 people have been employed to help with the Christmas rush, while the January sales are expected to maintain the buying boom.

Previous Article Mortgage Update: Want to Borrow Less than €100k? Forget It…
Next Article Property Update: Reflecting on 2020 and what the Future Holds (Part 1)