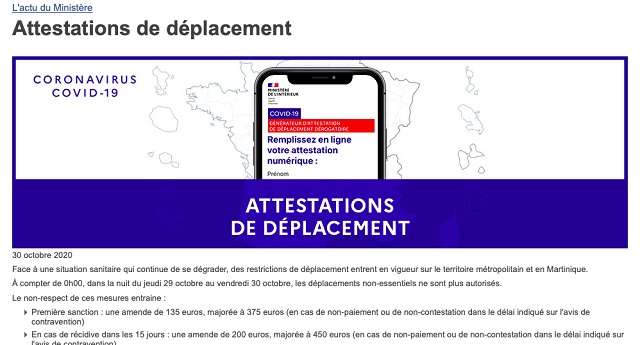 In this week’s news digest: Covid-19 updates, confinement news and what you cannot buy at a supermarket

Latest figures from Santé Public France concerning Covid-19 in France reveal 231 deaths in hospitals in the 24 hours to Sunday, with 46,290 new cases of contamination in the same period. This brings the total number of deaths to 37,019 deaths and 1,413,915 confirmed cases since the epidemic began.

France currently has 24,031 people hospitalised, including 3,578 serious cases in intensive care. The test positivity rate has again risen, to 20.4%.

Santé Public France has also revealed that 96 departments are currently in a situation of high vulnerability, while the four regions of Île-de-France, Auvergne-Rhône-Alpes, Hauts-de-France and Grand Est still account for 70% of patients in intensive care.

Current numbers in hospital by region, and number of deaths in last 24 hours:

As of today, ‘grande distribution’ outlets – supermarkets and hypermarkets – are not allowed to sell non-essential items, following an announcement by Prime Minister Jean Castex on Sunday.

The move is aimed at calming annoyed small businesses and shop owners who have been forced to closed during this second lockdown period (due to run until at least December 1), by restoring some kind of equity between them and large retailers.

Many ‘local’ shop owners deem it grossly unfair that supermarkets have been allowed to continue selling goods that are banned from sale elsewhere.

What can I not buy at a supermarket?

Among the supermarket aisles (“rayons”) due to be cordoned off will be those displaying cultural products like books and CDs, as well as toys, flowers, clothes, white goods, home wares, make-up and jewellery.

It will still be possible, however, to order these items online where available or to order and pick up via ‘click and collect’ functions at certain stores (often called a ‘Drive’) at French supermarkets.

To help smaller businesses with internet sales, Economy Minister Bruno Le Maire announced on Sunday on BFM TV that a fund of €100million would be deployed to “digitise small businesses”.

Another measure to encourage orders that might help smaller businesses is a “significant reduction” of postal charges for books ordered in librairies (bookshops), said Roselyne Bachelot, Minister of Culture, on LCI yesterday.

Certain mayors in France have broken the government’s legal ruling by allowing shops to open by local decree, a move denounced by Mr Le Maire: “This handful of irresponsible mayors threaten the health of the French”, he said.

Meanwhile, Ile-de-France’s regional president Valérie Pécresse demanded that “very quickly, if the health context allows it, prefects can make exemptions for the reopening of small businesses”.

For anyone in France that needs to go out – for whatever reason, be it for work, exercise or to do essential food shopping – an attestation de déplacement form is now obligatory, and may be requested by the police anytime, anywhere. Failure to have a valid reason and a form correctly filled out, could result in a €125 on-the-spot fine.

Government spokesman Gabriel Attal said today that since Friday, 100,000 attestation controls have taken place, resulting in 14,000 fines for non-compliance. He also added that a 9pm curfew might be re-introduced in Paris and Ile-de-France, in addition to confinement.

Forms can be completed digitally on a smartphone or downloaded to print off and fill in by pen.

There is also an easy-to-understand pictogram version (in French) included – click on the one marked ‘FALC’.

Previous Article Mortgage Update: Look to borrow at least €100k!
Next Article Property Update: So you can’t get to France…what CAN you do to prepare?