The National Federation of Real Estate (FNAIM) has been in the news in recent months, after being accused by the Notaires governing body, the High Council of French Notariat (CSN) of using a symbol that bears a strong resemblance to the famous ‘notarial seal’ to legitimise its members.

The CSN says the new FNAIM symbol – which features “Vesta”, the Roman goddess of the home, carrying a spear in one hand and a torch in the other – is confusing customers. A Latin motto is inscribed, meaning “to enlighten and defend”.

According to a study carried out by the Harris Interactive Institute in March at the request of the CSN, 52% of respondents associate the FNAIM sign with the profession of notary, “thus attesting to the confusion with the symbols of these public officers”, said the CSN.

At the beginning of 2020, the CSN summoned the FNAIM in summary proceedings before a Paris court. Although initially scheduled for May 19, the hearing was postponed to a later date at the request of the FNAIM.

See for yourself – the two symbols are pictured below. 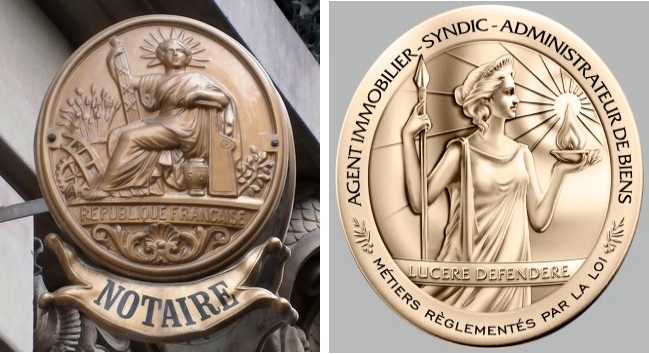 The FNAIM was the main sponsor of the flagship TF1 show “Who wants to be a millionaire” all week, and will broadcast advertising spots on LCI, France’s second largest news channel, for three weeks.

The objective is to promote the real estate professionals who are members of the FNAIM to the French people, so that they can pursue or initiate their projects in complete safety.