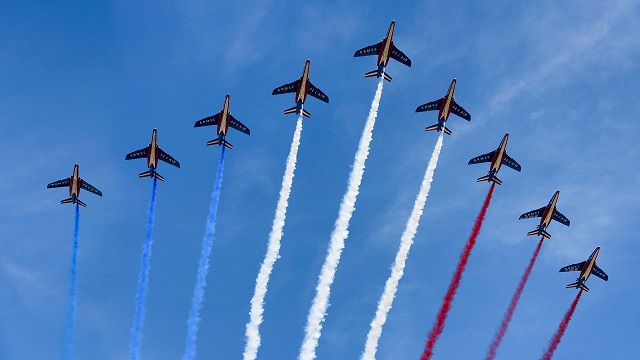 In this week’s round-up of news from France, we bring you a Covid-19 update, plus how Bastille Day is very different this year.

For obvious reasons, July 14 celebrations in France are different this year. The traditional military ceremony, in the presence of President Macron, took on a reduced format on the Place de la Concorde in Paris this morning, and included a tribute to healthcare workers and civil servants who worked tirelessly during the Covid-19 pandemic.

In respecting the rules of social distance, the ceremony was reduced to 4,500 people, including 2,500 participants. Around 50 planes and 20 helicopters formed an airborne parade, including the emblematic jet fighter troupe, the Patrouille de France.

The ceremony began with a tribute to General Charles de Gaulle, 80 years after his famous call to resistance, launched from London.

The whole thing was closed to spectators, who usually line the Champs-Elysées, but was broadcast live as usual on television.

As for the traditional firework displays tonight, each prefecture around France may, on a case-by-case basis, authorise shows, provided that they ensure social distancing measures are in place, plus the wearing of a mask by spectators. And even if a prefecture does authorise firework displays, individual mayors are within their rights to cancel shows. A maximum of 5,000 people may attend a show in any case.

Jean-Michel Dambielle, boss of one of France’s leading fireworks display companies, Ruggieri, has conceded that many communes will not be setting off fireworks: “We had hoped to do 20 to 30% of our usual 4,000 events with our partners on July 13 and 14, but in the end we’ll be more like 5%,” he said.

Some cities, such as Pau (Pyrénées-Atlantiques) have opted for an alternative, with lanterns being released for residents to observe from home, said France 3 Aquitaine.

In a live interview on national TV and radio after the Bastille Day ceremony this lunchtime, President Macron said he is in favour of “making mask-wearing obligatory in all enclosed public places”.

And of his presidential tenure thus far as President, Macron said:

“I’ve probably made some mistakes that didn’t allow me to bring the French together”.

Asked about the fierce opposition he sometimes faces, the head of state admitted that he had “undoubtedly made mistakes” that prevented him from “bringing the French together”.

“We have not produced enough results because we have not been quick enough,” he said.

7,062 people are currently hospitalised with the disease in France, 496 of them in a serious condition in intensive care.

77 outbreak ‘clusters’ are currently under investigation (a rise of 11 in 24 hours) while two overseas departments, French Guiana and Mayotte, are described as being in a “highly vulnerable situation”. The new Prime Minister Jean Castex flew to French Guiana on Sunday.

In other Covid-19 related news…

Second wave: to mask or not to mask?

The big public debate in France is now whether the government should impose mandatory mask-wearing in public places (confined or otherwise), or rely upon civic-minded citizens to be sensible and wear one where necessary.

Health Minister tweeted on Saturday: “Barrier gestures are not an option. Don’t hesitate to wear a mask in any situation, especially if you are not sure you can keep 1 metre away from those around you. It is through everyone’s civic-mindedness that we will preserve everyone’s health!”

On Monday, however, Mr Véran warned that a ‘strong recommendation’ [to wear a mask] might turn into an obligation soon.

The Minister also met with beleaguered nightclub industry representatives on Sunday, to discuss the rise in bars and restaurants – which, unlike nightclubs, are already permitted to open – that are transforming parts of their premises into discotheques.

Meanwhile, on Saturday, 14 of France’s top doctors, including top infectious diseases specialists, put their name to an article in Le Parisian newspaper saying “the compulsory wearing of masks in all enclosed public places” is necessary to prevent a new wave of the coronavirus epidemic in France. Currently mask-wearing is only obligatory on public transport and in certain shops.

The authors said that while they acknowledge that wearing a mask is “uncomfortable”, they point out that it is “an important condition for limiting the spread of the virus” if “everyone wears one”.

Jacques Battistoni, president of the union of doctors, MG France, added his call for mask-wearing to be made mandatory. “People have to tell themselves that not wearing a mask is a gesture of incivility, in relation to the society in which we evolve when we can’t keep a sufficient distance”.

The Mayor of Nice, Christian Estrosi, also called for mask-wearing to become obligatory in public places. “Let’s make a decision once and for all,” said Estrosi, who came under fire after a concert by DJ Avener took place on Nice’s Promenade des Anglais on Saturday night – an event that he green-lit.

He said there were fewer than the currently permitted maximum 5,000 people gathered for such a public event, and that all necessary precautions were carried out. “Hygiene measures, filtering at the entrances, everything was respected,” he told France 2.

But he questioned whether concert-goes themselves took enough responsibility at the event. “Above all, we have to ask ourselves, even though all the health rules were respected, whether personal responsibilities pose a problem of collective security.”

A major casualty of the shutdown of international travel during the Covid-19 crisis is France’s plane manufacturer Airbus, which has announced 3,378 posts to be cut in Toulouse alone (from 5,000 around France). Knock-on industries linked to aeronautics will also be hit hard.

Union officials and regional authorities in Occitanie warned: “In total, we will approach 20,000 jobs that may be threatened in the region. It’s a very, very strong shock” for the aeronautics industry, the president of the Occitanie region, Carole Delga, told RTL.