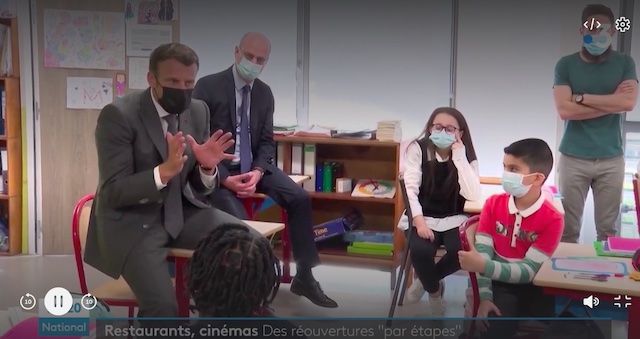 In France, the latest report provided by health authorities concerning the Covid-19 pandemic, has revealed at least 5,498,044 confirmed total cases, with +24,465 of those coming in the 24 hours to Sunday.

Here is the regional breakdown of total cases, intensive care numbers and deaths (over 24 hours) by region, provided by Santé Public France:

Deconfinement: a regional approach in stages

An exit from the third Covid lockdown in France looks set to be rolled out in stages, with the government planning a regional approach – though specific dates have not been announced.

During a visit to a primary school in Melun (Seine-et-Marne) yesterday by President Emmanuel Macron and Education Minister Jean-Michel Blanquer (pictured), one of the pupils asked the President: “Do you think that Covid will be gone soon?”, to which Macron replied: “I think we’re going to continue to be careful for several weeks, a month, but each time, we’re going to lighten the rules”.

The suggested post-lockdown schedule includes a mid-May re-opening for bar terraces with restaurants and sports halls to follow suit some time in June. The vagueness is deliberate – as it all depends on the speed at which the epidemic is brought under control in each department.

The president is due to clarify the situation for restaurants, cafés, cinemas, non-essential businesses and cultural sites in the coming days, though he is said to be concerned about opening them too soon, only to have to close them again.

At the Melun school, another pupil brought up the subject of the current 7pm curfew, to which Macron replied: “Seven o’clock, it is very early,” without giving more details.

Yesterday was the latest school rentrée after a three-week enforced closure. 400,000 saliva Covid tests are set to be carried out during the week in schools across France.

As we first reported last week, US visitors can plan a visit to France this summer, though only if they are double-dose vaccinated.

The move was confirmed by Ursula von der Leyen, the President of the European Commission, in an interview with the New York Times, but it is still be approved by member states.

A European Commission spokesman clarified the remark, saying: “The opening of the EU’s external borders will depend on the epidemiological situation and the ability of EU nationals to travel within the European Union.”

SNCF to ramp up rail schedule

The SNCF is going to increase its rail services for the upcoming deconfinement by offering a near-normal service in time for busy holiday weekends Ascension (starting Thursday May 13) and Whitsun (Pentecôte is Sunday May 23).

“Today, you have about four out of ten TGVs running, (…) one out of two Intercity trains and eight out of ten TERs. From May 3, we will increase this transport offer so that the French can travel,” the CEO of SNCF Voyageurs, Christophe Fanichet, told Europe 1 yesterday.

The SNCF will run more trains during the weekends, eight TGVs out of ten on May 7 and “almost all” during the May bank holidays, he added. Reservations are already open, as well as for the summer holidays in July and August.

Mr Fanichet also disclosed that the SNCF is due to unveil a new, more easily understood fare structure on June 1, the date when it will also stop its overbooking (surréservation) process and extend the services of low-cost Ouigo TGVs, particularly in Brittany.

Previous Article Giving Away Your French Holiday Home: What Are the Legal and Tax Implications?
Next Article Travel Between France and the UK: New Rules from April, 2022