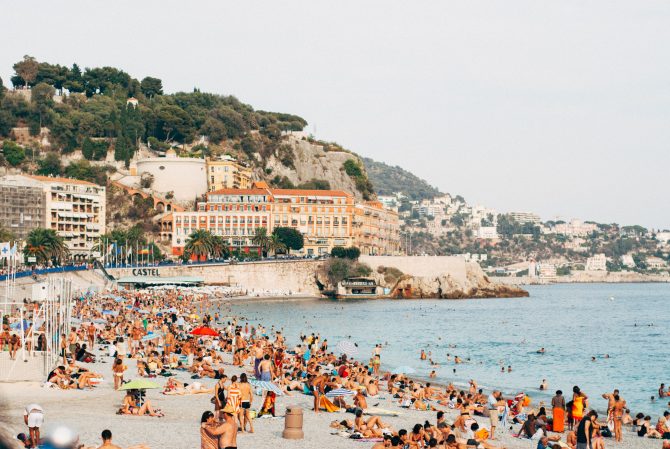 It’s officially summertime in France, but there’s concern about a fourth wave of Covid sweeping the country as the holidays kick off. Plus, those vaccinated with Indian-manufactured AstraZeneca vaccines may run into issues when travelling. Here are the five French news stories you need to know about this week.

Today (July 6th) marks the day that French schools break up for their summer holidays, making it official—it’s summertime in France! Kids typically have about eight weeks of holiday and many workers also get four weeks holiday in August, so expect cities to empty out and roads to be busy over the coming weekends.

Other signs that summer is here include the opening of Paris’ urban beaches (there are three this year at Bassin de la Villette, along the Seine, and in the Jardins du Trocadéro) and the start of the annual summer sales (les soldes), which began on June 30th and will last until July 27th. This is one of only two annual sales in France (held at summer and Christmas), with discounting strictly regulated outside of these periods, so make the most of it if you’re looking for a bargain.

After months of lockdowns, curfews, and strict health regulations, France is gearing up for a summer of fun (with health restrictions still in place, of course). This week sees the start of some of the country’s most popular events and festivals, most of which were cancelled last year due to the pandemic. The prestigious Avignon Theatre Festival kicked off yesterday, while the Cannes Film Festival starts today, and the Marseille Jazz Festival on Thursday. Friday (July 9th) also sees nightclubs reopening for the first time since March 2020.

Remember that entrance for all large events and festivals requires a Pass Sanitaire (Health Pass) providing details of a negative Covid test or vaccination. Download France’s TousAntiCovid app and scan the QR code of your vaccination or Covid test certificate.

Despite the steadily declining number of Covid-19 cases over the previous month, Olivier Véran, France’s health minister, has cautioned against being overly optimistic. A fourth wave of cases, caused by the delta variant currently sweeping through the UK, is inevitable, he warned on Sunday, and we should prepare to see numbers climbing again towards the end of July. This new variant is reportedly much more contagious, with case numbers rising among younger age groups as well.

There is currently an average of 2,500 new cases per day in France, around 30% of which are now due to the delta variant. This is still far behind the UK figures (averaging 10,000 new cases per day), but Véran insists that maintaining health measures, continuing the push for vaccinations, and employing test and trace systems will be crucial for keeping this fourth wave under control.

When comparing France’s vaccine strategy (which received widespread criticism for its slow start at the beginning of the year) to the UK’s, the health minister was also keen to point out that prioritising the most vulnerable citizens had been an important strategic move. Over 70s now have the highest percentage of fully vaccinated people (around 80%) in France and even though the overall numbers are still lagging behind that of the UK and other countries, there is hope that this will help protect against the worst of the fourth wave. As of June 30th, 33,961,307 have received their first dose of a Covid-19 vaccine in France, while 22,813,043 are fully vaccinated.

Vaccines are now open to all people in France over the age of 12 and continuing vaccinations throughout summer will be key to protecting against this fourth wave. While some vaccine centres in Paris have announced they will close over July and August, there are now walk-in vaccine centres springing up around the country, with no appointment necessary (sans rendez-vous). These include mobile vaccine trucks for Tour de France supporters, walk-in booths set up in supermarkets or village markets, and some vaccine centres also offering set days or times for ‘walk-ins’. Look out for these stands at major events or sign up to your local town’s Facebook group or Twitter for the latest alerts.

Booking websites such as Doctolib will now also allow you to book your second vaccine at a different vaccine centre, for example, at your holiday destination.

5. AstraZeneca’s Covishield Not Accepted in EU

Vaccinated travellers from green countries (such as the US and Canada) and orange countries (such as the UK) can now enter France without the need for an essential reason or quarantine under France’s traffic-light travel system, and we reported last week about the introduction of EU Health Passports for travellers within the EU. However, one important detail has just been confirmed regarding the rules of vaccinated travellers.

France has confirmed that, currently, individuals vaccinated using some AstraZeneca vaccines will not be counted as vaccinated. This only applies to those who received a vaccination using the Indian-manufactured ‘Covishield’ version of the vaccine, not the Europe-produced ‘Vaxzevria’ version. The reason for this is that the former version does not have a European sales licence and despite using the exact same ingredients, it is not on the EU’s list of approved vaccines.

This means many vaccinated travellers from India, Africa, and the UK (which has also used large numbers of the Indian-produced products) may find their vaccination status is not valid for entry to France.

If you’ve already received your AstraZeneca vaccine in the UK, you should check the batch number (which will be on your vaccination card or available on the NHS app) to see which product was used for your vaccine. The batch numbers that are currently not approved by the European Union are 4120Z001, 4120Z002 and 4120Z003.

Don’t panic about cancelling that summer trip to France just yet, though. Some European countries have already agreed to allow Covishield vaccines and an application for a European sales licence has been filed – if this is issued (and there is no reason that it shouldn’t be), these restrictions will soon be lifted, so sit tight! We’ll update you on the latest once we know more.

Previous Article Take Advantage of the Exchange Rates to Maximise Your Property Budget
Next Article What Are the Forced Heirship Rules in France?