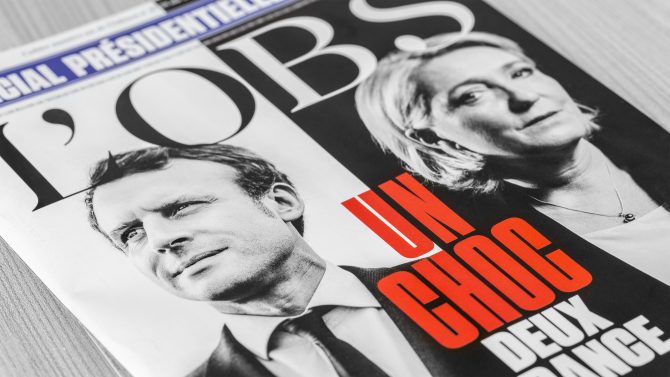 Macron and Le Pen gain enough votes to move through to the second round of the French presidential elections, Société Générale pulls out of Russia, and technical difficulties have been plaguing France’s online portal for tax returns. Here are the French news stories you need to know about this week.

1. Macron and Le Pen to Fight for Presidency

The first round of France’s presidential elections took place on Sunday, April 10th. The preliminary results were announced at 8pm, revealing that the 2022 election would indeed be a repeat of the previous 2017 election, with current president Emmanuel Macron going head to head with far-right candidate Marine Le Pen.

By Monday afternoon, the official results were in—Macron was in first place with 27.84%, Le Pen was second with 23.15%, and in third place was hard-left candidate Jean-Luc Mélenchon with 21.95%. The results showed a surprisingly tight race between Le Pen and Mélenchon, with no other candidate outside of the top three managing to receive more than 10%. In fact, all but Eric Zemmour (who received 7.07% of the vote) received less than 5%, including the Parti Socialiste (PS) and Les Républicains (LR), historically the two main parties, proving just how dramatically France’s political landscape has changed since that pivotal 2017 election.

The second and final round of France’s elections will take place on Sunday, April 24th, with the two candidates set to take part in a live televised debate on April 20th. Polls show a tight race, with a worrying rate of abstention and far closer results than that of the 2017 second election. While Zemmour encouraged his supporters to vote for Le Pen, Mélenchon unsurprisingly did not endorse Macron; however, he did firmly instruct his supporters: “do not cast a single vote for Le Pen”.

We announced last week the opening of France’s online portal for making tax declarations, but if you rushed off to file your annual tax return, you might have come across some technical difficulties. The site was suspended on Friday due to some ‘discrepancies’ in the system, but it is now back online, and the Finance Ministry was quick to reassure users that the issues will have no impact on tax returns or PAYE tax deductions.

If you have already filed your tax return, you now have the option to check your declaration (simply log in to your account online), while those yet to fill in their declaration shouldn’t run into any further problems.

Remember that if you are resident in France, it is your responsibility to file your annual tax return, and almost all residents are required to do so, even if you are retired, do not receive any income from French sources, or do not have any taxes to pay (as is now the case for most French employees who are taxed under the PAYE scheme).

You can log in to your tax account here and submit your tax declaration for your 2021 earnings online. Read our guide to filling in your first tax return, check out our 2022 French Tax Calendar for your department’s deadline, or visit our French tax zone for everything you need to know about French taxes.

Société Générale is the latest French company to pull out of Russia after Ukrainian President Volodymyr Zelenskyy urged French firms to stand in solidarity with Ukraine. The French banking group issued a statement just yesterday announcing that it was ceasing activity in Russia, a move that is estimated to cost the country €3.1 billion.

The group has been working behind the scenes for several weeks to finalise the agreement, stating that its priority was to exit in “an effective and orderly manner from Russia, ensuring continuity for its employees and clients”. The bank is selling its entire stake in Rosbank to Russian investment firm Interros Capital, the previous shareholder, and will therefore cease all banking and insurance activities in Russia.

Previous Article How the Russian/Ukraine Conflict Might Affect Your Finances
Next Article Where to Buy in France – Hesdin: Buying Hotspots