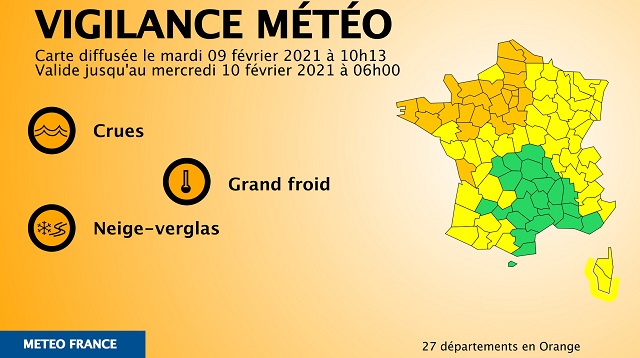 According to the latest report from French health authorities, there were 458 additional deaths and 4,317 new cases in the 24 hours to Monday. This brings the total number of deaths to 79,243 and the total of confirmed cases to 3,341,365.

However it should be noted that due to weekend reporting problems Monday’s figures are always lower than overall trends – the average for the last three weeks is 20,000 new cases per day.

France currently has 27,995 people in hospital with Covid-19 and 3,353 patients in intensive care.

According to data from Santé Public France, 100 departments are currently in a situation of ‘high vulnerability’.

Here is how each region is faring, with overall hospital figures and deaths in the 24 hours to Sunday:

The Covid-19 epidemic in France “is stable and high”, Olivier Véran, the French Minister of Solidarity and Health, told Franceinfo this morning.

“At this stage, the President of the Republic was right not to decide on generalised confinement two weeks ago,” explained the minister. “The situation today does not justify a generalised containment measure”.

It is even possible, he added, “that we may never be re-confined. Confinement is not a choice of ease and safety but a choice of necessity”.

Mr Véran also said that new Covid-19 variants represent one out of seven new cases. “We are working with scientists to see how they are progressing, what the effect of the curfew is, and we have announced additional measures to reinforce the effectiveness of the curfew over time.”

“We remain in a very vigilant state with daily analysis of contamination and hospitalisation figures”, he concluded.

Mr Véran himself received his first dose of the AstraZeneca Covid-19 vaccine yesterday. As a doctor, he is now one of the French people who can be vaccinated.

Upon leaving the hospital in Mélun, he called on all caregivers, firefighters and helpers to get vaccinated, and gave his assurances that “stocks are coming”.

He said that France has 270,000 doses in 100 key hospitals, and that 300,000 additional doses will arrive in the next two days. Pharmacies are preparing to deliver the vaccine, with more than 1,000 centres planned for general vaccinations – and Mr Véran confirmed that vaccination slots are available for people wanting to book their first injection.

He said that he will get his second dose in “9 to 12 weeks” but stressed that vigilance should not be relaxed by those who have been vaccinated. “Although I received an injection of vaccine, I still wear a mask, I use hydro-alcoholic gel and I respect all barrier gestures. In short, I am not relaxing my vigilance.”

More than 2,216,000 vaccinations had been administered in France by yesterday (Monday, February 8), according to a press release from the Directorate General of Health (DGS).

The wave of cold temperatures and snow set to sweep across the north of France will be “an episode to remember”, said the weather forecaster Météo France.

Temperatures as low as -16°C will be felt in some parts, while a “notable snow episode” is expected overnight tonight (Tuesday to Wednesday). Several departments have been placed on a “snow-ice” orange alert.

The first snowfalls arrived this morning in the south of Brittany, then gradually they will become more and more frequent and more marked in Brittany, Normandy and also towards the Pays de la Loire and the north of the Centre-Val de Loire.

“The snow could reach the Paris Basin by tomorrow evening, and then spread to the northeast. It is really about the Normandy coast, the Breton coast and the banks of the Loire River to the northeast regions, where we expect between 3 and 7 cm of snow,” Méteo France spokesman Sébastien Léas told Franceinfo.

Previous Article Life After Brexit: Curry in the Time of COVID
Next Article UK Vaccination Programme Continues Supporting the Pound