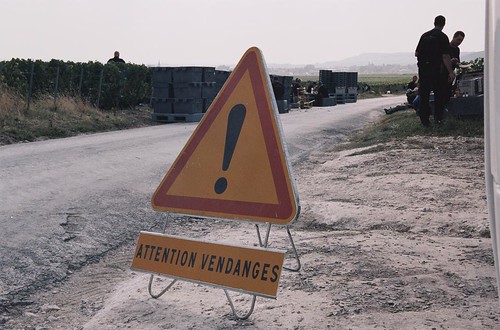 2013 is going to be a blockbuster year for the Champagne wine harvest. The production this year is predicted to be almost 50% higher when compared to the previous year (which was a particularly low year so the statistics can make it sound higher than it actually is, but it’s going to be a good year whichever way you look at it, at least 10% higher than average*).

The vendange gets into full swing in September, the dates are set by an official document called the ban des vendanges, and at the end of the hard work, as with any accomplishment in France, you can expect a whopping big dose of conviviality.

Le cochelet is the party at the end of the harvest, the last meal together before the labourers disperse. It traditionally marks the closing of the pressoirs and consists of a hearty meal, like a potée champenoise or coq au vin, generously helped along by champagne. In order to participate in the cochelet you don’t necessarily need to have done the hard work of picking grapes. You can score an invite if you know a vintner, or even a friend of a friend of a second cousin twice removed. In any case, if you are lucky enough to be a part to the feast, you can expect to feel somewhat “fragile” the morning following the cochelet, so pack some aspirin and don’t plan on doing anything too challenging.

[*These figures are related to the grape harvest but do not necessarily mean that there will be more Champagne on offer or that the price will go down. By the nature of the way champagne is produced, this bumper crop wine will be used in blends spread across different years.]