Need an Excuse for Crêpes? It’s La Chandeleur in France! 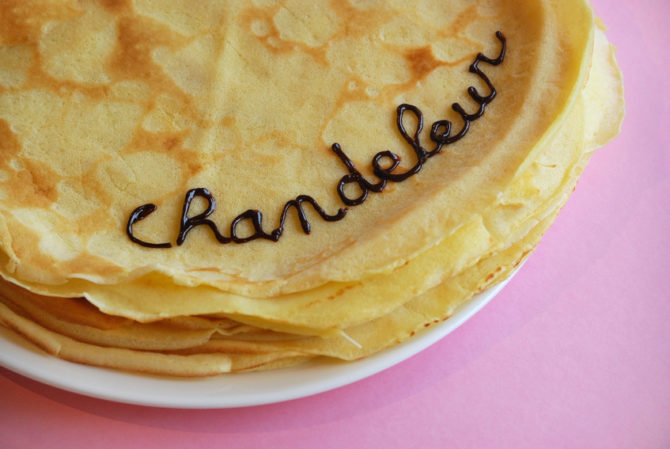 As if we really needed an excuse to indulge in crêpes, when the Fête de la Chandeleur (or Fête des Chandelles) rolls around.

“À la chandeleur, l’hiver se passe ou prend vigueur” goes the proverb, roughly translated it means that around the time of the chandeleur, observed on February 2nd, winter either will show signs of passing or it will get harsher. Sounds familiar? That’s because in the US it’s Groundhog Day. If it’s cloudy when the groundhog emerges from his burrow and can’t see his shadow it means that spring will come early, but if it is sunny (the groundhog refuses to exit his burrow and goes back to bed if he can see his own shadow) then winter weather will continue for six more weeks.

La Chandeleur marks the time of year when winter is winding down and the “birds and the bees” are just about to get busy. The tradition is rooted in pagan rituals of fertility surrounding the purification of the soil at the end of winter in preparation for sowing. Romans lit candles around midnight and the Celts held a procession along the fields by torchlight. In the Christian lithurgy this time is marked by a lighting of candles in memory of the presentation of the baby Jesus at the temple.

In France this occasion is celebrated with pancakes, always popular with children. Some say the pancake resembles the shape of the solar disk in a reference to the pagan rituals, others say that an early form of pancake was distributed to the hungry and exhausted pilgrims when they arrived in Rome.

These days friends and family get together and prepare a stack of crépes to share. It’s up to each guest to pick their favorite style, but a popular choice is to sprinkle with sugar, spread with hazelnut-chocolate paste or jam. Here comes the science, so pay close attention: when you are making your crêpe you must hold the flat pan with your right hand and a coin in your left (it used to be a gold coin). When you flip the crêpe, it must land perfectly flat to guarantee prosperity for the whole year. Try it. You can thank me later. Even if it doesn’t work out financially, at least you’ll have enjoyed a delicious treat!

Get the recipe here.