World Record in France, 408 Hot-air Balloons Take to the Sky Together 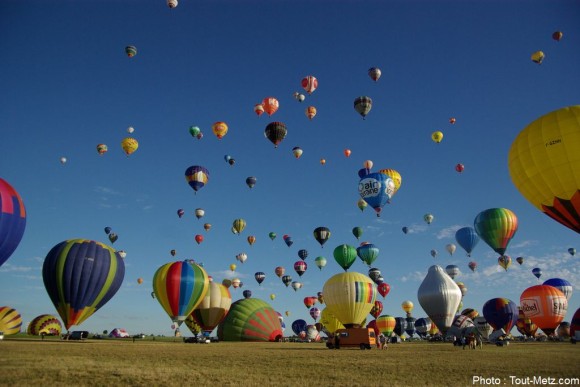 In both a spectacular display of logistics and the perfect photo opportunity, a new world record was set in France during the Mondial Air Ballon event taking place this week in Chambley, in the eastern region of Alsace-Lorraine.

A total of 408 hot-air balloons took off concurrently against a perfect blue sky on July 31st. The show is an bi-annual meet held on odd numbered years and is considered as one of the top 10 events in France and the number one event for montgolfiers anywhere in the world with the participation of over 3000 pilots from 60 different countries.

Le Parisien reported that the record was duly certified at 8pm on Wednesday July 31st, and a second record was set on Thursday morning when the longest line of hot-air balloons was assembled, with 391 ballloons set out in formation along the aerodrome runway.

Find out more about the Alsace-Lorraine region.