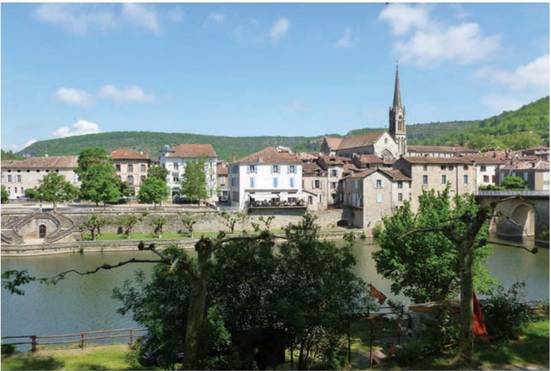 Where to Buy in France Now! 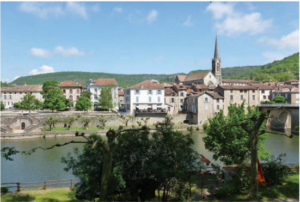 The Medieval origins of Saint-Antonin are still much in evidence, which makes it a very desirable place to buy.

Situated on the boundaries of the Quercy, Albigeois and Rouergue provinces, Saint-Antonin-Noble-Val is one of the oldest towns in the area. It nestles between the Aveyron and Bonnette Rivers and is dominated by the majestic Roc d’Anglares.

Built around an 8th-century Benedictine Abby, the town has retained its Medieval appearance. It’s narrow, winding streets feature ancient houses with double-arched Medieval and stone-mullioned windows, elegant Romanesque arches and old doorways. In the Middle Ages, the town was an important trading and craft centre and it still boasts z variety of artisans, including painters, sculptors, potters, engravers, jewellers, leather workers, dressmakers, embroiderers, specialist effect painters, antique dealers, art gallery owners and upholsterers. The presence of so many artisans, trades people and essential services make Saint-Antonin an important economic centre for the area. At the beginning of the 20th century, Saint-Antonin was famous as a spa town and today its spring water is bottled.

Outside of town, the Aveyron Gorge, its limestone cliffs and surrounding plateau, are a pleasure to explore. There are many outdoor activities, including rock climbing (with 600 annotated and equipped routes), trails for hiking and mountain bike riding (15 marked paths start from the town and it’s also part of the GR46 trail), pot-holing, canoeing, horse riding, viaferrata and hang-gliding. All of these activities can be undertaken, either on your own or with professional local instructors.

Almost 50 societies eliven the town year-round, and there’s also a cinema showing both mainstream and art-house films (all in original version), a municipal museum, arts and fold traditions and the underground caves of the Grotte du Bosc. Saint-Antonin has been used as the location for two major films, Charlotte Grey starring Kate Blanchett and The Hundred Foot Journey with Helen Mirren. In 2015 it was voted French citizens’ third favourite spot (Le Village Préféré des Français) and has just entertained the Tour de France.

The weekend of 13-15 August saw two annual events take place, namely the Fete de la Saint-Antonin, which ended with a magnificent fireworks display on the banks of the River Aveyron, and the Course de Cote de Saint-Antonin-Noble-Val, a 1.5km racing car hill climb up the side of the Aveyron Gorge.

Property-wise, Saint-Antonin is very popular with British, Dutch, Belgian and Australian buyers. Understandably, the town’s Medieval properties are at a premium so potential buyers on a budget should widen their focus to include the villages fringing Saint-Antonin, and across the neighbouring Tarn, Tarn-et-Garonne, Lot and Aveyron.

That said, over the past few years, local vendors who are seeking a reasonably early sale have either reduced their prices or placed their properties on sale at a competitive level. The recent fall of the Pound hasn’t had any major effect on local property sales as vendors who are returning to Britain have been able to reduce the price of their property to compensate, and still realise a good return due to the relatively higher value of the Euro.

*With thanks to Jane and Charles Smallwood, our partner agents in Saint-Antonin-Noble-Val

SEE ALL PROPERTIES FOR SALE IN THIS AREA>>>

FURTHER INFORMATION ON THE AREA

Previous Article Buying Hotspots – Sourdeval, Lower Normandy
Next Article Is Your Tax And Wealth Management In Shape For 2017?