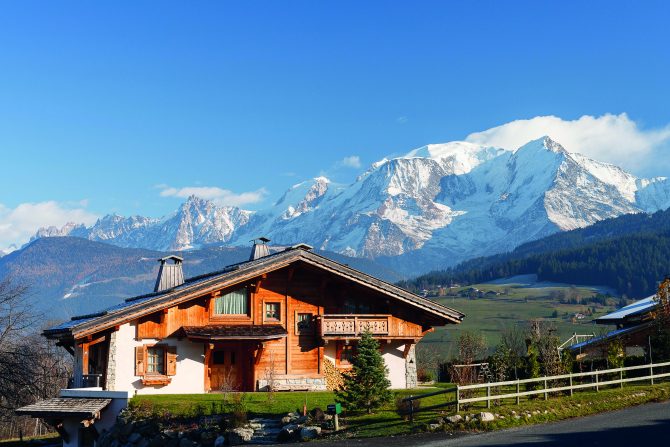 Tucked in a beautiful stretch of the Alps – between Lake Geneva, Switzerland and Italy – Haute-Savoie boasts some of the prettiest and highest ski resorts, as well as gorgeous lakeside towns.

Pretty much everywhere you go in Haute-Savoie, you’ll find yourself on a slope. This département, known as Upper Savoy in English, has the largest elevations of all of France’s départements. Its lowest point is down in the Rhône Valley, just 250 metres above sea level, and its highest 4,810 metres up on the summit of Mont Blanc, Europe’s tallest mountain.

While the historical region of Savoie is split into two départements, Savoie and Haute-Savoie, it’s the latter we are focusing on here. Property ranges from village houses along the southern shore of Lake Geneva (Évian-les-Bains is the best known town) and townhouses in the larger centres such as Annecy (the prefecture), Bonneville and Saint-Julien-en-Genevois, to the chalets and apartments of famous ski resorts including Chamonix, Les Gets, Morzine, Avoriaz, Megève and La Clusaz. Mountain sports obviously loom large here, with some of Europe’s best hiking, mountain biking, road biking and trail running during the summer months, and some of the world’s best snow sports in the winter.

The département is bordered to the north by the ever-beautiful Lake Geneva (Lac Léman in French), to the east by Switzerland and Italy, to the south by the French département of Savoie and to the west by the département of Ain. Stretching across a mainly mountainous area of 1,700 square miles, its population (according to 2018 figures) is 816,000.

It’s a stunningly beautiful region, sculpted over millennia by glaciers and other forms of erosion into the peaks, ranges, valleys, forests, meadows and lakes that we find today. Although there is plenty of forestry and agriculture, it’s the Alpine towns and villages – meccas for snow sports in winter and hiking and biking in summer – that lure the lion’s share of Brits in search of holiday homes. Thanks to our love affair with mountain sports, many of the resort names are reassuringly familiar: Chamonix, Les Gets, Morzine, Avoriaz, Megève, Las Clusaz, Les Houches.

At lower altitudes, you find the region’s major towns of Bonneville, Saint-Julien-en-Genevois, Thonon-les-Bains and Annecy. The latter is the largest, but still pleasantly compact with just 128,000 residents.

The quickest route into Haute-Savoie is via Geneva airport, just across the border in Switzerland, which is served by airports all over the UK. Otherwise, there is Chambéry airport (full name Chambéry Savoie Mont Blanc), with winter links to a selection of British cities through Jet2.com; as well as Southampton and London City airport on British Airways. The TGV zips between Paris and Chambéry in around three hours. Motorways serve Annecy, Bonneville and Passy, after which mountain roads snake their way up to the resorts. In winter, especially, these can add long hours to your journey.

Thanks to the huge number of ski resorts dotted across the region, the property market in Haute-Savoie is almost constantly buoyant. And with wealthy buyers from all over the world clamouring for apartments or chalets in the more famous resorts, you’ll find plenty of major estate agents willing to advise you.

In the better-known resorts, you’ll be competing with uber-rich buyers with very deep pockets. Far better to opt for villages a little way down the mountain, where you’ll avoid the crowds at peak times – as long as you don’t mind driving up to the ski lifts. If you’re determined to bag a ski-in ski-out property, choose one of the lesser-known – and often more charming – resorts. For example, close to Megève and Chamonix are their cheaper sister towns: Saint-Gervais-Les-Bains and Les Houches, respectively.

The challenging geography of this region – as well as the mountain roads, hairpin bends and traffic bottlenecks – can make house/chalet/apartment-hunting a laborious affair. Some of the loveliest properties are in the most isolated places. Also remember to visit in both summer and winter before you buy. There is a marked change in atmosphere and village life between the seasons.

Should you plan to rent out your property, consider buying an apartment in a managed residence so that there’s always someone around to iron out any problems. And if you’re spending summers in the Alps, you may want a chalet with its own garden.

On the lower slopes, you’ll find the prefecture, Annecy, on the northern tip of Lake Annecy, its lovely buildings reflecting off the lake and other waterways. Saint-Julien-en-Genevois is right on the border with Switzerland, almost forming part of Geneva’s suburbs, but still in France. Thonon-les-Bains and Évian-les-Bains are two lovely spa towns on the shores of Lake Geneva, the former has a funicular railway, the latter is home to the mineral water.

What the Agents say

Andy Symington is Director of Mountain Base, an estate agency in Chamonix and part of the Knight Frank Global Network.

He warns British people looking to buy property in Haute-Savoie to do their research prudently. “The market is hot, with demand outstripping supply,” he says. “We are seeing many buyers overpaying for properties. Don’t rush into a purchase. Remain cynical, speak to different agents and form your own opinions on pricing.”

Andy is convinced property prices in this area will continue to rise. “There has been a surge in interest in the Alps following the Covid lockdowns of 2020 and 2021, with more emphasis on open space, air quality and outdoor activity. We are seeing demand focused on those properties that make the most of this with good volume and light, as well as outdoor space – whether that’s gardens for chalets or good balconies/terraces for apartments. For the larger properties, those with proper study/office spaces are appealing to owners looking to spend as much time as possible working remotely.”

He warns that environmental regulations on heating systems are becoming increasingly strict in this part of the world, where winters can often be brutally cold. “Ever-increasing regulation is forcing the replacement of outdated heating systems. The reality is that some chalets will become almost obsolete as the cost of significant works to upgrade insulation and replace heating systems makes them financially unviable. Properties with good, renewable energy sources are seeing leaps in value.”

Andy offers some very sound advice to Britons planning to rent out their mountain property. “Buyers should always put themselves in the position of a potential renter,” he explains. “Ease of access is paramount, particularly for regular visitors – whether that’s distance from the airport, ease of transfers to and from the resort, regularity of flights, or the road access to the property.”

And if he personally had money to invest, where would he choose? “I am biased, but it would be Chamonix,” he says, convinced that property prices will continue to rise, especially as Chamonix’s tight valley location means there is little spare housing stock. “It’s a town, first and foremost, rather than a purpose-built resort,” he adds. “Buyers want to spend more time in the mountains. Chamonix is genuinely active all year round and has the infrastructure to support permanent residency. It has a long history with mountaineering, has high skiing and is the most accessible in terms of transfers from the airport. Its global reputation will assure its continued appeal.”

He does have one caveat, however. “If you want a sleepy Alpine retreat with little more than the sound of cowbells, then it’s probably not for you.”

Jon Dobson moved from London to Chamonix in 2000 to start a business in the snowboarding industry.

Its proximity to Geneva airport and the borders with Switzerland and Italy appealed to him. “It ticked all the boxes and, of course, had great skiing and snowboarding,” he says.

Twenty years on, he is fully immersed in the local community, thanks to his total fluency in French. He has two children, both born in France and now at primary school. He runs a sign-writing and branding business called Source 74 (source74.com) and plays in a band.

Jon says he loves living here, but feels that this corner of the Alps is hardly typically French. “I’m not sure I would class life in the Chamonix valley as a good example of life in France,” he says. “The ex-pat community here is huge, including lots of Brits and Scandinavians, a smattering of Canadians and, more recently, Spanish and Eastern Europeans. There are people who have been here many years and can barely order a croissant in French. If you don’t speak French, then integrating into the French community is a challenge.”

On the plus side, Jon emphasises the amazing sport and leisure facilities to be found in Haute-Savoie. “Chamonix sits at the base of Mont Blanc, so it is a strong mountaineering destination.”

He points out that there has been good investment in Chamonix’s infrastructure, which has encouraged more skiers in winter. One bonus is the availability of a ski pass that covers other resorts including Megève, Saint-Gervais, Courmayeur in Italy, and Verbier in Switzerland. “This is a huge bonus, especially if you’re looking to ski with young kids or beginners,” he adds.

The restaurant scene here, he says, is excellent. “You can pretty much eat anything from all over the world, and the quality is generally excellent, albeit with a hefty price tag. If you pop through the Mont Blanc tunnel to Italy, however, you can eat great Italian food for much less.”

After 20 years of living here, Jon says he still loves the lifestyle. “I’m completely comfortable here, as are my kids, and even if this might not be considered real France, life is good.”

Dreaming of moving to Haute-Savoie?

Browse Properties for sale in Haute-Savoie

Previous Article Keeping Track of the Market: Currency Q&A
Next Article News Digest: Will Foreigners Receive the Right to Vote in France?