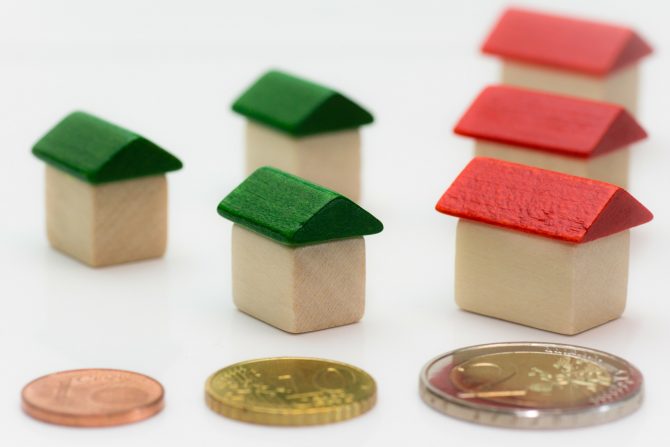 Many foreign property buyers opt to finance their purchase with a French mortgage, but how do you know which mortgage is best for you? Should you opt for a fixed-rate or variable-rate mortgage? Can you get an interest-only mortgage in France? To help you decide, here’s our guide to the different French mortgage types available.

In France, traditional repayment mortgages are by far the most common. Interest-only mortgages do exist, however, although they vary from those typically offered in other countries. Let’s take a look at the options for each.

The vast majority of French mortgages are traditional, fixed-term repayment loans. For most French property buyers, these mortgage loans make the most sense. Although monthly payments will be higher, the overall interest paid will be much lower (as the amount you owe decreases each month) and by the end of the mortgage term, your mortgage will be paid off in its entirety.

These types of mortgage can be arranged over a term of anything from 6 years up to 30 years, and you can choose between interest rate options—variable-rate, fixed-rate and capped rate (more about this later).

With an interest-only mortgage, you will end up paying more interest overall (as the loan amount stays the same throughout the mortgage term), but monthly fees will be much lower. Because of this, they can be a cost-effective proposition for investors and property developers, especially among international buyers, where it affords greater flexibility over the timing of lump-sum payments (meaning you can plan long-term and benefit from positive trends in currency exchange rates).

Interest-only mortgages are possible in France, but they are considered much higher risk and therefore the qualifying criteria are much stricter. Generally speaking, you would need to have minimum assets of at least 150% of the loan amount, including a degree of liquidity, and the minimum loan value would likely be higher (at least €200,000 instead of the normal €100,000, but some banks might ask for a minimum of €500,000). You may also be asked to place a year of payments in escrow with the bank or place financial assets with the bank.

Other options in France include part-term interest-only mortgages, whereby the mortgage is interest-only for a fixed term (for example, the first two to ten years), after which it converts to a variable-rate repayment mortgage.

Each mortgage application would be considered on a case by case basis, and it’s highly recommended to seek the advice of an independent mortgage broker if you are looking at an interest-only mortgage.

Traditional repayment mortgages are available in fixed, variable, or capped rates, with mortgage terms typically between 6 and 20 years. The minimum loan amount is €150,000, and the maximum loan to value is 80% (20% deposit), for EU and British buyers. This is reduced to a maximum of 50% (50% deposit) for American, Australian, and other non-EU buyers. In the wake of the Covid pandemic, expect a minimum loan of €250,000 for American, Australian, and other non-EU buyers.

Whether or not you will be able to borrow the maximum, depends on various factors—see our article French Mortgage Eligibility: LTV Rates, Deposits, & Age Limits.

Variable-rate repayment mortgages mean that the rate of interest you pay varies according to the EURIBOR base rate – the ‘European Inter Bank Offered Rate’. However, one key difference with French mortgages is that interest fluctuations are often not applied to your monthly payments, but rather in adjustments to the mortgage term. The most common practice in France is that the monthly payments remain the same, but the overall term of your mortgage is lengthened or shortened accordingly.

An advantage of this kind of mortgage is that they tend not to penalise lump-sum payments on the capital. For buyers hoping to pay off their mortgage early or foreign borrowers looking to benefit from favourable exchange rates, this can be an attractive proposition.

Fixed-rate mortgages are the most popular on the French market and offer the greatest security in terms of financial planning. A fixed-rate mortgage means you can be certain of your monthly payments and the mortgage term.

Unlike many other foreign mortgages, whereby fixed-rate interest is offered over a set period only (after which the mortgage switches to variable-rate), full-term fixed-rate mortgages are commonplace in France. Add to this the consistently low interest rates on offer and it’s easy to see why these mortgages are so popular.

One potential downside is that some fixed-rate mortgages impose penalties for overpayments or redeeming credit. It’s important to consider this if you are likely to want to make one-off lump sum payments on your mortgage or hope to pay off your mortgage before the end of the term.

Capped rate mortgages work as a variable rate mortgage, however, there is an upper limit on the rate which applies during part or all of the mortgage term. This can be a good option for those who want to benefit from penalty-free overpayments, but still maintain an element of security in case of any drastic rises in interest rates.

Other Types of French Mortgages

There are a number of other French mortgage types available to suit the varying needs of buyers, especially if you approach lenders outside of the main French banks. These mortgages are not always offered to international buyers and the best way to access these is through an independent mortgage broker. Here are a few of the potential options available.

This one is a fixed-rate loan with two repayment periods. A first period with a higher monthly payment and a second period with a lower monthly payment. This can be beneficial to those retiring soon or hoping to take a step back in the future. This product lasts between 8 and 20 years and has a minimum loan amount of €100,000. The maximum loan to value is also 85% (15% deposit).

Generally speaking, remortgaging a French home is not a common practice as it is in many other countries. Remortgaging in order to benefit from lower interest rates or shop for a better deal is far less common, not least because the costs associated with doing so often outweigh the minimal rewards. The best advice for property buyers is to find a mortgage that suits you from the outset.

However, it is possible to remortgage a French home and release equity in certain circumstances. This is most likely if you have upwards of 40% equity in your French home (remortgages with a high Loan to Value (LTV) are very unlikely to be approved) and if you can prove sufficient income, and have other assets, savings, and liquidity.

Remortgaging to release equity is also unlikely to be approved without a solid reason. Freeing up equity in order to purchase a second home or make a property investment, or in order to carry out renovations or improvements on the property are both likely to be considered. However, releasing equity for other reasons (for example, to fund a large one-off purchase or event such as a wedding), would be a non-starter for most French lenders.

Find the Right Mortgage for You

From finding the best mortgage rates to making your mortgage application—FrenchEntrée is here to guide you through the whole process. Learn all about French mortgages with our Essential Reading guides, keep up-to-date with the French mortgage market through our latest posts, then sign up to become a FrenchEntrée member for free access to our property, currency, and mortgage experts.

Once you’re ready to kick-start your French mortgage search, fill out our mortgage application form. Our independent mortgage advisors can advise you on the best options for you and put you in touch with mortgage brokers and lenders all around France.