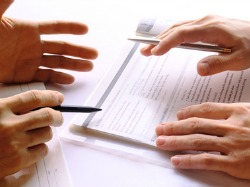 Small disputes with a professional are quite common. In such a case, embarking on a prosecution is inadvisable due to the sum in question. However, without spending too much money, some steps can be taken in order to obtain a resolution.

The first step would be to send a “letter before action” to the professional. In this regard, such a letter should preferably be prepared and sent by a French lawyer as this will have more impact in obtaining a resolution than a letter from a lay person. This would not be a costly exercise.

Then, should this first step fails, you have the option of approaching various third party organisations to try to find an amicable solution to your problem. These steps have the advantage of being free of charge.

Firstly, you could contact a professional syndicate depending on the nature of the litigation. For example, if you have a dispute with a small entrepreneur (such as an electrician or a maître d’oeuvre) concerning renovations or works carried out on a property, you could contact the CAPEB (Confédération de l’Artisanat et des Petites Entreprises du Bâtiment) as they intervene in any disputes concerning building works. They can be contacted by letter that explains the details of the dispute. On receipt of your request, the syndicate will contact the professional in order to find an amiable solution between the latter and the consumer.

You may also contact a consumer aid service such as La Boite Postale 5000. This is an organisation managed by the DDCCRF (Direction Départementale de la Concurrence, de la Consommation et de la Répression des Fraudes). It has both consumer and professional representatives and its aim is not only to advise on all matters concerning the consumer, but also, where possible, to facilitate an amicable settlement of disputes between consumer and professional. They can be contacted by letter sent to Boîte Postale 5000, postcode and name of the department where you live.

If, despite the above, you are not able to find an agreement, you can seek the intervention of a judicial mediator. The latter is a legal representative nominated by the president of the Court of Appeal. The mediator can be appointed by letter, by telephone, or by attending a consultation. In order to find his contact details, and to find out how to meet with him, you need to contact the local town hall (mairie) or the nearest small claims court which will tell you how to proceed. On receipt of your request, the judicial mediator will contact the two parties in order to find an amiable solution.

Most of the time, those above steps could lead to satisfactory amicable agreements. However, it is important to have a good knowledge of the French language as well as the French legal system. As such, without spending too much money on legal fees, it is worth contacting a French Lawyer to assist you approaching those third parties organisations and putting the amicable proceedings in place.