How snails are bred in France

Snails are such a French-associated speciality, and are often ordered from menus by tourists due to the novelty factor. The French eat them because they can be very tasty and satisfying, but where do they actually come from?

Snails eaten in France are not all gathered from the wild, although a lot are…in Greece. But some are still bred in one of France’s 200 snail farms. I visited snail breeders Béatrice and Pierre Fouquet, to find out how their snails come to be.

We rang the bell and looked around while we waited. Hiding in the undergrowth, everywhere we looked, were models and sculptures of snails in different sizes and styles. A smiling Béatrice came over to us, and started to show us around. Firstly, she took us to the breeding room. It was fascinating! 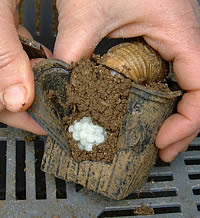 A snail laying its eggs.

We learned that although snails are hermaphrodites, they need to mate – for around 12 hours! – in order to breed. Their sexual organs are where you might expect their ears to be, and 3 weeks after mating, they stick their head into a pot of earth, and spend a further 12 hours laying their 100 or so eggs. Another 3 weeks on and the eggs, rather than hatching, actually turn into snails. 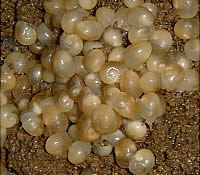 Finally, after a week of snaildom, the babies are taken to the netted, domed pens, where they will live for around 4 months, until they are fully mature adults, ready to be eaten. Radishes are sown in the pens, and their leaves serve as both food and hiding places for the snails, and the whole ecosystem is sprayed with water once a day.
[mrb]

The ‘breeds’ of snail are the Petit Gris and Gros Gris, which originate in North Africa, and we were surprised at how large the Gros Gris are – their bodies around 3 inches long. Their cousins, the Petit Gris or garden snail, are the wild, native snails which are gathered and eaten in France and Britain.

Some snails from L’Escargot du Périgord are sold live to restaurants and private customers, but 80% are prepared and cooked by Pierre and Béatrice. This takes a lot of work. The snails are killed by being plunged into boiling water. I did ask Béatrice if that had caused any problems for her. “What kind of problems?”. “Um, worry about being unkind to the snails.” She laughed at my English sensibilities, and explained that it was very quick, and better than the slow deaths of the old days, when snails were smothered in salt and vinegar while still alive. Next, each snail is individually gutted, before being washed is salt and vinegar, and boiled in stock for an hour and a half. Some snails go into the Fouquet’s pâtés, preserves, hors d’œuvres and tasty reheatable dishes, while others are stuffed back into shells and covered with garlic and parsley butter, for baking in a hot oven until bubbling and browned. The Béatrice and Pierre still eat and taste snails regularly, and Béatrice favours her preserved ‘Sauté d’Escargot’s aux Pleurottes’, which is snails in a sauce with mushrooms, crème fraîche and tarragon.

Why did you start the snail farm? 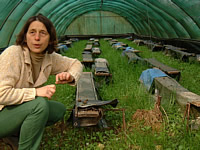 “We started up 15 years ago. I am from Paris, and Pierre is from the Charente, but we both went to agricultural college near Perpignan, where we met. After graduating, we found it hard to find work in that region, and Pierre worked on the sowing of sunflowers for 6 years, while I did agricultural consulting work all over the place. We only saw each other at weekends. After coming on holiday to Périgord and falling in love with the area, we decided to settle here, and wanted to set something up so that we were our own bosses and so that we could live and work together. We also wanted to do something a bit unusual. We had the advantage of me coming into contact with all different kinds of farms through my work, and we decided on snails.”

Do you still enjoy it?

“Oh yes! Everyday is different. And we sometimes forget our mistakes and make them again, which keeps things interesting! We have regular customers, we do chambres d’hôtes, and we don’t answer to anyone. We wouldn’t want to change our lives or work.”

The Fouquet’s customers come from all over France and some order their snail goodies through the post. Others are regular customers at the farm shop or the markets in Thiviers (every Saturday morning) and Brantôme (each Tuesday between 15th June and 15th September). The farm also offers visits and tastings throughout the summer. It is a fantastic place to take children – and grown ups!

We took home a tin of the Sauté d’Escargot’s aux Pleurottes, snails with garlic and parsley butter, in pastry shells, and a snail terrine.

• With thanks to Pierre and Béatrice Fouquet,  L’Escargot du Périgord