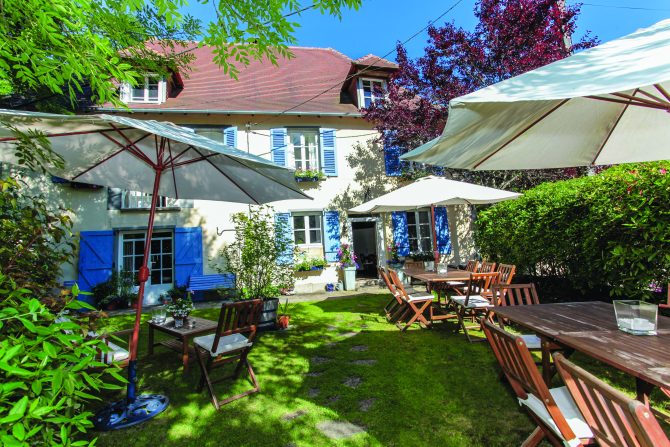 Just inland from Bordeaux and La Rochelle, Périgord Vert offers abundant greenery, rich architectural heritage and an enviable climate. Annaliza Davis outlines why this is such an irresistible region for would-be buyers.

If you haven’t heard of Périgord Vert, it’s the northern part of the Dordogne, an inland area of southwest France that has long been a favourite with the British. Summer temperatures sit between 25°C and 35°C but can reach 42°C, while winter can be cold with strong winds off the Atlantic.

What we know as the Dordogne covers 9,000km² and is split into four distinct geographical areas: Périgord Vert lies to the north surrounding Nontron, Périgord Blanc is centred around Périgueux, Périgord Pourpre is southwest around Bergerac, and Périgord Noir is southeast Dordogne with Sarlat at its heart. Each boasts rivers and valleys, waterfalls and lakes, hiking and biking trails, vineyards and châteaux.

How expensive are properties in the Périgord Vert?

Unsurprisingly, the most desirable – and therefore more costly – areas to buy are those with easiest access to the coast, or with good rail and road links to the big cities, as these are popular holiday home spots for city-dwellers. That said, houses here remain impressively affordable.

If you look around Ribérac and Nontron, properties range from €580 per m² to €1,160 per m² – far below France’s average of €2,490 per m² – and you’re spoilt for space: Périgord has 46 people per km² (the national average being 71), with 80 per cent of residents living in what’s officially categorised as a ‘rural’ spot. Finding peace and quiet is definitely no problem here!

Given its climate and lush landscapes, Périgord Vert is a fantastic area for outdoor lifestyles, nature enthusiasts and anyone interested in ecological living and green tourism. Its landscapes are sprinkled with picture-perfect villages, lazy rivers, vineyards and dense woodlands filled with deer, boar and birds of prey. It’s renowned as being unspoilt, reminiscent of Scotland – but with far better weather!

Despite covering a third of the Dordogne, Périgord Vert has no big metropolitan cities. Its capital is Nontron, with 3,000 inhabitants and a fabulous 17th-century château. Located five hours from Paris by car, this modest medieval town offers two-bedroom townhouses from €69,000 and bungalows with 700m² gardens for under €85,000, either of which you could rent out for about €380 per month. With €250,000, you could buy a three-bedroom stone-built property with 3,000m² of land on the outskirts of Nontron.

For a popular tourism spot, beautiful Brantôme on the River Dronne (2,500 residents) has rather a shortage of rental properties, and the average price of a 50m² house here is only €69,950, or you can find renovation projects starting at €38,000. It boasts a breathtaking abbey overlooking a weir, plenty of architectural heritage and charming stone houses from €130,000 or detached villas that are move-in ready for under €200,000.

The market town of Thiviers is very accessible at less than five hours’ drive from Paris and with a train station. It has a full range of properties, from two-bedroom detached bungalows starting at €83,000, to eight-bedroom manor houses for €650,000, averaging between €895 and €1,474 per m². It’s a natural crossroads between Limoges and Périgueux, a gateway to the region’s stunning natural parkland and offers pretty landscapes of terracotta rooftops, so it would be a great choice for anyone planning a green tourism project.

Bargains are not restricted to one geographical area. In Champs-Romain, properties start at an incredible €567 per m², while in Jumilhac-le-Grand, there’s a one-bedroom semi-detached renovation project for €14,000.

There’s no coast here, but plenty of riverside properties, including the tourist town of Brantôme (a detached waterside home here can be yours for less than €130,000), and don’t forget that this is also an area with plenty of swimming pools to cool off in during the warmer months.

As for building, you’ll find plots of around 1,500m² throughout the area for around €20,000, but check that you’re looking at building land (terrain constructible) or, even better, land with water and electricity ready to connect (terrain viabilisé). Near Thiviers, such plots 2,500m² in size are available for €20,000, which is more than big enough for a detached home and huge garden.

Before visiting any property that seems to be a real bargain, double-check that it isn’t listed as viager, which means that it has a sitting tenant, so although you can buy it, you wouldn’t be able to use it immediately yourself.

Ten of France’s prestigious list of 164 ‘Les Plus Beaux Villages’ are in the Dordogne. Saint-Jean-de-Côle is a fine example of what it takes to make the selection: medieval architecture, a gurgling river, an impressive château and quaint cobbled streets. Only 20 minutes from Brantôme or Nontron, it’s a must-see for its picturesque scenery typical of Périgord Vert.

Transport and Employment in Dordogne

The closest international airport is the one in Bergerac, with smaller options in Limoges and Périgueux. As for rail links, most require a journey via Bordeaux then Thiviers (Paris-Thiviers is possible in around five and a half hours by rail). Most towns in Périgord Vert are really only accessible by road, but the infrastructure is good as this area sits between Limoges, Angoulême and Périgueux. So even travelling from Brantôme to somewhere on the coast like La Rochelle or Arcachon will only take you around two and a half hours.

The Dordogne – and especially Périgord Vert – has predominantly rural and woodland landscapes, and is home to diverse agriculture and flourishing food industries. However, tourism is vital to the local economy and this département is France’s top non-coastal tourism destination.

Income overall is relatively low, notably for labourers, farmers and artisans, with retirees having the most disposable income. However, the unemployment rate is no higher than the national average (currently around eight per cent) and in Périgord Vert, a lot of employment is generated by beef farming, fresh produce, timber and leatherware, while smaller businesses are becoming increasingly popular.

Why we moved to Périgord Vert

Last year Lindsay and Elaine Brown took the plunge and moved from Cheltenham to Jumilhac-Le-Grand in Périgord Vert. Here Lindsay shares his experience of house-hunting and life in France with Elaine, two cats and a border collie.

“Elaine and I are from South Africa, but a work opportunity brought us to the UK with our two young children in 2005 and we settled near Cheltenham. We’d kept a holiday home in South Africa but when we sold it, we started to think about our next chapter as a couple.

“I knew France from regular work trips to Paris, and I’d heard about Dordogne. We wanted a better lifestyle and good weather, we wanted friends and family to be able to visit us but really, after 15 years in the UK, we wanted to return to the outdoor lifestyle, with the sun on our faces more often. “

We spent hours researching online, compiling a ‘must-see’ list for viewings, and came out four times before falling in love with our new home. It has a gîte, pool, outbuildings and you get a lot of property for your budget. The area is just so amazingly beautiful and ticked all the boxes: it’s far enough south for better weather, has fabulous food, natural beauty and three airports nearby.

“No move is easy. The one from South Africa to the UK brought no language problems but it was still hard. Relocating from the UK to France was also difficult, but has brought an incredible amount of personal growth and new experience.

“If you do not yet speak French, it’s helpful to have other English-speakers nearby to help build a network of friends. If you try to communicate in French and are polite, you will receive the same back from the French. We are loving the lifestyle, it’s relaxed and true community living, everyone helps each other.”

Dreaming of property in the Périgord Vert?

Can’t wait to find out more about the Périgord Vert in the Dordogne département? Browse our local and regional guides or take a look at our property listings

Browse properties for sale in Dordogne