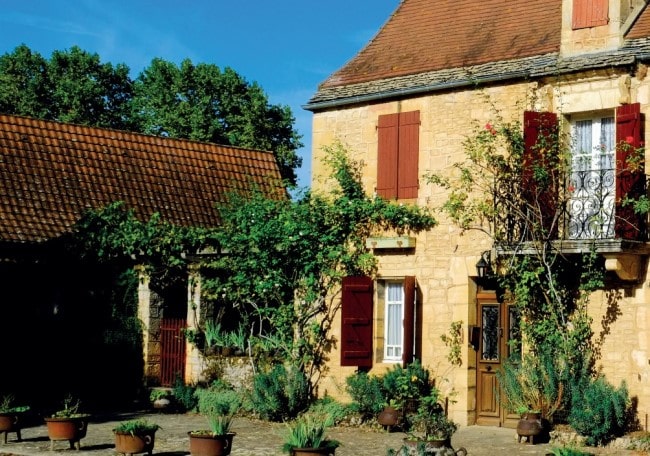 Lush farmland, beautiful ochre-hued houses and a slower pace of life, it’s no wonder the Dordogne has been so popular with Brits over the years – but don’t worry, it still has bags of Gallic charm, says Dominic Bliss.

The Dordogne is one of France’s mightiest rivers. For 300 miles – from the volcanoes of the Massif Central to the Gironde Estuary near Bordeaux – it snakes its way through hills, gorges, vineyards, orchards, lush farmland and dense woodland. No surprise then that it has given its name to one of the country’s bestknown (and best-loved) départements.

Why buy in the Dordogne

The region that now occupies the Dordogne has been popular with us Britons since the Middle Ages, when it was part of Aquitaine, and firmly under English rule. It may have required the Hundred Years’ War to finally boot out those medieval anglais interlopers, but fast forward to the 21st century and the English have successfully staged a second invasion. It’s a far more peaceful one this time, though, led by expats and second-homers, rather than sword-wielding knights.

According to a survey by France’s statistics institute INSEE, there are almost 7,200 Britons currently living in the Dordogne, more than half resident there for the past ten years. Only Paris has more rosbifs, as the French call us. So what is it that draws expats here in their hordes? Rolling green countryside and medieval villages dotted with pretty stone houses and châteaux are major factors, as is access to the great wines and rich cuisine of the Southwest. But there’s another key draw: the reassuringly slow pace of life.

Where to buy in the Dordogne

INSSE research shows that, for the British, the most popular towns are Eymet, Nontron and Ribérac. Here the Anglo community comprises nine per cent, five per cent and 4.3 per cent respectively.

Parts of Eymet really are a slice of little Britain. In this delightful town, on the River Dropt, you’ll find an English pub, tea rooms, a cricket club and English shops. While that may not be to everyone’s taste, it certainly makes for a thriving community. Eymet forms one corner of what local estate agents call Dordogne’s “Golden Triangle”. This is a 60 square-mile area with the city of Bergerac in the north, and Eymet and Issigeac at the other two corners.

Don’t allow the Golden Triangle to dominate your property searches, however. There are hundreds of other stunningly beautiful towns and villages scattered across Dordogne – some with their fair share of Brits, others only lightly touched. What you will discover is a plethora of lovely, old stone farmhouses, ripe for conversion – or with the conversion already complete.

And dominating many of the finest towns are château fortresses such as the ones at Beynac-et-Cazenac, Biron, Castelnaud-la-Chapelle, Jumilhac-le-Grand, Hautefort, Marquay and Villars.

Where is the Dordogne?

The département of Dordogne, which roughly covers the same area as the ancient province of Périgord, falls into the much larger administrative region of Nouvelle-Aquitaine. With an area of 3,500 square miles, it’s mainland France’s third largest département, but populated by only 417,000, meaning there are just 46 humans per square kilometre. Perfect if you’re looking for a tranquil lifestyle.

The most convenient airport is Bergerac Dordogne Périgord Airport in Bergerac, with British Airways flights from London-City and Southampton; Jet2.com flights from Birmingham, Leeds-Bradford and Manchester; and Ryanair flights from London-Stansted, Bristol, East Midlands and Liverpool. There’s also an international airport at Bordeaux.

The département is very rural and the biggest town is the capital Périgueux, with just 30,000 residents. Apart from Bergerac, with 28,000 inhabitants, all the other settlements have fewer than 10,000. You certainly don’t move here for urban culture. That’s precisely the point.

Traditionally, the département is divided into four separate areas, each with its own distinct identity. The central region, around Périgueux, with its large valleys, meadows and limestone plateaux, is called Périgord Blanc – white, for the limestone. In the southwest, around Bergerac, is Périgord Pourpre, where the main vineyards lie – purple, thanks to the wine. Then there’s Périgord Noir, around the town of Sarlat-la-Canéda – black, because of the dark oak and pine woodland. Finally, to the north and northwest, there’s Périgord Vert – green, due to the rich river valleys, forests and farmland.

The State of the Property Market in the Dordogne

So popular is the Dordogne among British buyers that most estate agents claim to be run off their feet. There’s even an English nickname for the département: Dordogneshire. Although don’t let the locals hear you use it.

Terrie Simpson, a British estate agent who runs Agence Eleonor in Eymet, says the lockdowns in France have encouraged city-dwellers to consider moving to the Dordogne countryside. First came the Bordelais, then the Parisians. “Prices aren’t rising right now, but I think that will come,” she says.

Guillaume Lefrancois runs Agence du Perigord estate agency in Saint-Cyprien, just west of Sarlat-la-Canéda. “The coronavirus crisis has created a mini urban exodus,” he says. “Everyone wants their own little plot of land and nice way of life. The market has been very lively since the end of France’s first lockdown, with more supply than demand. But that demand is going to increase. For that reason, I envisage an inevitable increase in prices.”

According to property website www.meilleursagents.com, prices across the département have remained fairly static since the economic crisis of 2008. The average price for a house is currently €1,320 per square metre, and €1,379 per square metre for an apartment.

When it comes to houses, among the most expensive communes are Beynac-et-Cazenac, which sits on the north bank of the River Dordogne, a short distance southwest of Sarlat-la-Canéda (€2,239 per square metre); Fanlac, east of Périgueux, in rolling woodland (€2,113); Proissans, just north of Sarlat-la-Canéda (€1,959); La Roque-Gageac, also on the banks of the Dordogne (€1,941); Paunat, further west, towards Bergerac (€1,933); and Domme, again on the River Dordogne (€1,896).

Tucked down in the southwest of France, the Dordogne has a relatively mild climate. Summers never get too hot, and winters never too cold.

Looking to buy in the Dordogne?

Can’t wait to be there? Having found out a little more about Dordogne, do you feel that this could be the location for you? If so, browse our property for sale in the Dordogne and if you’d like some more in-depth help with your house-hunt, give our property team a call on +44 (0)203 773 2824 – it could be the start of your new life in France!

Previous Article Civil Partnership, PACS or Marriage: Will My PACS Be Recognised in the UK for Inheritance Tax?
Next Article Making the Most of Your Scouting Trip to France