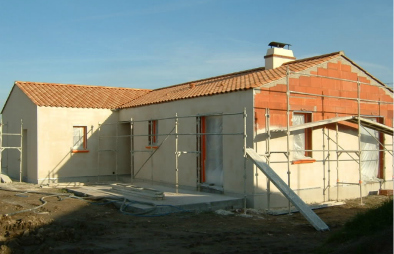 A Cautionary Self-build Tale from the Lot

Having your own house built to northern European standards in the Lot is an appealing alternative to resurrecting a damp pile of wet stones in a deserted hamlet or perhaps at the other end, buying a finished but often highly priced liveable house. In the beginning, you can be seduced by an enthusiastic Immobilier into believing that the process is easy. Buy a plot of land from him with views into eternity, contract a reputable builder that he recommends, choose one of the imaginative designs from the portfolio, believe what you are told about the finished price and delivery dates, sign your contract, pay your deposit, leave everything to him and go back to the UK in happy anticipation of long hot summers by the pool.

To do this, is to be completely beguiled into a potentially disappointing and frustrating experience The entire process, will almost always take about two years, can be a minefield of petty bureaucracy, procrastination and false hopes which often result in stressful despair. As to trying to do it by proxy from the UK, just forget it.

So, how can you go about this process in a country where bureaucracy is world class and has been elevated to a national sport, where the most often used word in the building lexicon is ‘demain’ and Robert le Maçon (Bob the Builder to you) has a very creative approach to time keeping?

The trick is to allocate two years of your life, take Prozac, patiently follow procedure however petty, doggedly hassle and cajole, and above all be bloody minded/ charming/ obsequious and diplomatic in equal measures and take more Prozac. It helps to have the fortitude of a Saint, the ability to speak French better than rusty ‘O’ level standard and quickly learn French Builder’s speak. Oh, by the way being resident close to the site is desirable (It helped us no end in the building phases of which more later). With all of this and a little luck, you will be surprised at how rewarding the end result can be. To illustrate what may be before you, I have chronicled our experiences (bear in mind, we speak French and are ‘old Francophiles’)

We found a parcel of land with CU (outline planning permission) on a hill above the Lot; set about buying it with the help of an Immobilier who has since become a personal friend and without whose help and wise council, murder would have been committed. Almost immediately, we had a hiccup – the vendor just forgot to tell anyone that the CU had lapsed so time went by whilst efforts were made to resurrect it. Visits to the local Maire to check the cadastre also revealed that the vendor had also been less than accurate about the size of the plot so a full survey was needed. Using the Geometre (surveyor) we discovered that the bornage (or dimensions) were actually bigger than was offered BUT that the newly discovered bit sneakily included a farm track that had been used by the neighbouring farmers for generations and who were not happy to have what they thought of as right, taken away from them by ‘les voisins Anglais’. To avoid outright war (all French Farmers hate their neighbours with a vengeance) meetings of all interested parties on site were held, diplomacy came to the fore, prickly egos soothed, agreements reached but more time wasted.


Moral: Check; check; check and then check again. Take nothing at face value and assume that most French Farmers will try to stitch you up, especially if they can get one over on their neighbours at the same time.

We eventually signed the Compromise de Vente or initial contract of sale and paid the deposit. Three months later (end November 2005) we were at the Notaire, reading the Acte de Vente documents in legal French and at a slow pace for better comprehension, paying the purchase price, receiving an Attestation de Propriété and bingo, we were French Land Owners. Dossier by now around 15cms thick but that was the easy bit.


Moral: If your French is not good enough, take an experienced French person with you who will translate – legal French can be like Ancient Greek!

As the land purchase was well underway, we met the Sales Director of the builders, sat down, reviewed their portfolio; eventually choosing a stock design which we mildly tweaked for our convenience. We understood that completion by October 2006 was completely realistic, given a contract price and told about the penalty clauses that the builders would accept for non-performance. NB: designed to make us feel comfortable but actually meaningless. Our minor modifications to the design were said to be a small matter and would be sorted out by the Architects in the final plans prior to submission – we subsequently found that this department was based on the principles of Brian the Snail with a very eccentric concept of urgency.

Moral: Beware Builders Sales speak and remember their raison d’etre is to off load another property and get their commission. Altruism is not a word they understand.

The draft plans were at last ready for first review. At several meetings much minutiae was discussed and a draft specification agreed. An impression of progress was always charmingly given but nothing actually seemed to be happening. It was now late December 2005 and the dossier was getting on for 30cms thick and in 5 sub divisions.


Moral: You must control the meetings, set the agenda and don’t leave until you have written action points and agreement as to who does what and then persistently follow up. Also understand that NO ONE in France will ever call you back so do not trust voicemail.

The New Year came and went with no obvious progress or contact except complicated reasons for the further delays and several avenants (minor variations) for approval. The Sales Director became very busy and used his delightful secretary as a relay for a series of soothing messages. Their head office staff, equally charming, were just as pre occupied. Being given the mushroom treatment became the norm.


Moral: Become a real but polite pest, but do not rant and rave – possible loss of money, commission and personal ego works better than threats – remember carrots and sticks.

We were shuttling between home and the builders – they were still charming and blamed the Architects for the delays, most of which were for trivial matters. In the last week of February, some 6 months after start, a meeting was called to discuss our requirements for all the second fittings – tiling, bathrooms, flooring, heating. Expecting significant progress we went, made our choices in great anticipation – but this meeting was followed by a total silence and only generated another specification dossier.


Moral: Take a deep breath, ask yourself if you really want to continue with this Catch 22 nightmare. If so, continue to persevere and buy a bigger filing cabinet.

7 months after the start and at last, the builder’s Architects, who had managed to mislay the first set of plans, were ready to submit the new dossier to the DDE planning office. The French fonctionnaires (petty officials) then swung into their legendary bureaucratic mode in which everything is done meticulously, sequentially and very slowly. By late April 2006, with no apparent movement, we were bouncing between Builders, Officials, Mairie, Contractors, Utility Companies – all of whom were charming and all of whom, as usual, blamed the other’s total incompetence for the delays. Remember the mushroom farm analogy? Dossier now a small filing cabinet size.


Moral: Just hang in there, keep taking the Prozac and follow the little white bureaucratic ball.

In late May, our friendly Immobilier found out that there was a significant hold up at the Planning Office, just as we were expecting final planning permission approvals. He said that the positioning of the house violated a hitherto unknown but ancient building line unearthed by a diligent official and that we must reposition the house 11 metres to one side to be within the regulations. Sadly, since this official had the vitally needed rubber stamp there was no way around it. Investigation later revealed that whilst Vendor knew about this near mythical line and had slipped his mind.


Moral: Remember the caveat about checking and vendors stitching buyers up if they can?

Fearing further extensive delays and a total resubmission costing another three months, we enlisted the help of our Immobilier. With his staff, a fax machine, bottles of Snowpake a photocopier, several cups of strong coffee and a long morning of re-drawing site plans, we eventually managed to get the official to agree to a new positioning of the house. At last, we had approval, the magic rubber stamp and planning permission; almost 12 months from the start and with a full size filing cabinet to store the documents.


Moral: Be patient, learn to play the bureaucrats at their own game, and develop the fortitude of a Church full of Saints but you got there!

It had taken us twelve frustrating and stressful months dealing with architects, builder and the planning bureaucracy to get our planning permission so, full of anticipation, we expected the Builders to swing into swift action – remember the original forecast from the Sales Director? Sadly, we had not anticipated the August French holiday black hole and discovered that our build was not scheduled to start until mid September – 14 months after we first put pen to paper.