Gloriously rural, but dotted with charming fortified villages, stone houses and sleepy towns, the Tarn is a little pocket of France from the past, says Dominic Bliss

There’s a hilltop village in the Tarn called Cordes-sur-Ciel. It’s said to be the first bastide ever constructed, back in the 13th century. But it wasn’t originally planned for this location at all – under the charter of the Count of Toulouse, a different hilltop was chosen. Legend has it that, every morning, when the builders turned up, they discovered all their hard work had been destroyed during the night. This continued for a whole month. Eventually one of the builders, enraged, threw his trowel into the air. A few days later, the trowel was found on a nearby hilltop. Taking this as a divine sign, the Count relocated Cordes-sur-Ciel to its present site.

The beautiful village now forms the northern tip of what’s known as the Triangle d’Or du Tarn, or the Golden Triangle of the Tarn. Any property search in this département really ought to start here. 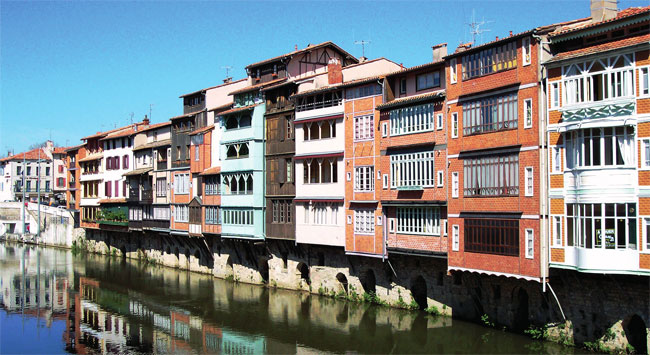 THE TARN’S PLACE IN FRANCE

Deep in the southwest of France, between the cities of Toulouse and Montpellier, the Tarn (not to be confused with neighbouring département Tarn-et-Garonne) occupies an enviable position with the Mediterranean to the east, the Atlantic to the west and the Pyrénées to the south. It’s a distinctly rural département, with an average of just 66 humans per square kilometre living across its limestone and sandstone hills, and its green valleys.

The good news for British expats is that, despite the rural location, travel to and from here is surprisingly easy. There are four international airports within easy driving distance – Toulouse Blagnac, Béziers, Carcassonne and Rodez – plus an autoroute that links the Tarn’s prefecture town Albi to both Toulouse and Rodez.

Nevertheless, it’s one of those places where you can quickly lose yourself. While the north of the département is mainly rolling countryside, dominated by the huge cut of the River Tarn valley, head southeast and you’ll see the hills rise, the valleys deepen and the forests thicken. Here you’ll find the mountain ranges of La Sidobre and Monts de Lacaune, with the Roc de Montalet rising to 1,259m. On the département’s southern border is a range called Montagne Noire. Dominant, too, is the in parts very wild Parc Naturel Régional du Haut-Languedoc – a 2,600 square-kilometre nature park that falls within the Tarn, Aveyron and Hérault départements.

In the Middle Ages, this part of France was ravaged as a result of the wars against the Cathars, as evidenced by the many fortified towns and bastide villages you can still see punctuating the landscape today.

The largest town, Albi (with around 50,000 inhabitants) has many reminders of its medieval past, most notably its mighty gothic cathédrale Sainte-Cécile. Its other claim to fame is that it was where post-Impressionist painter Henri de Toulouse-Lautrec was born. More than a thousand of his original works are celebrated at the Musée Toulouse-Lautrec. Many of Albi’s buildings are constructed in the regional orange brick, formed from clay found alongside the River Tarn. There’s no shortage of half-timbered buildings either.

The other major town of the Tarn is Castres (41,500 inhabitants), which – despite all the light industry based there – has its charms, especially alongside the Agout river. Castres is famous for being the birthplace of French socialism’s founding father Jean Jaurès. 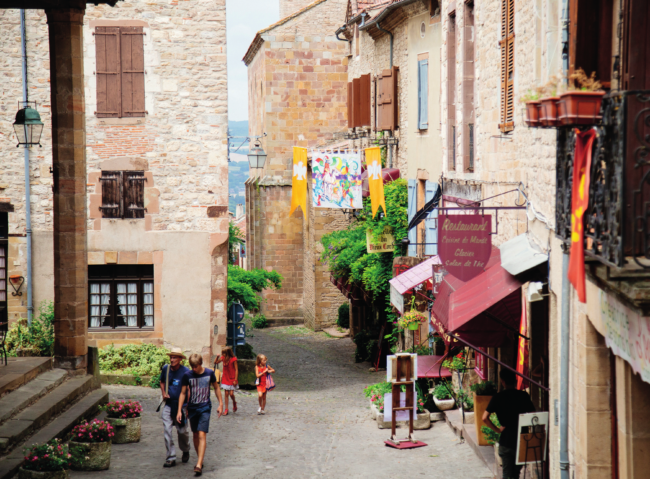 When it comes to cuisine, the Tarn finds itself within the orbit of Toulouse, even if the famous city falls inside a neighbouring département. So indulge yourself with rich regional dishes such as sausages (especially the white melsat variety), duck confit, veal, pigeon, cassoulet (the famous mix of beans, sausages and sometimes duck), cassoulet de morue (cod cassoulet), and even civet de sanglier (wild boar stew).

The Tarnais use some very distinctive flavourings and accompaniments in their dishes. The pink Lautrec garlic, for example; the local black truffles; and the creamy, yellow cep mushrooms. There’s also saff ron, courtesy of a collective known as the Safran du Tarn et du Lauragais. One dish that includes the latter is le gras-double à l’albigeoise – beef or veal with onions, carrots, leeks and gousse d’ail (garlic cloves) plus many spices.

Roquefort may hail from the neighbouring Aveyron, but you’ll fi nd it served in just about every restaurant across the entirety of the Tarn. Other local cheeses include Blanche d’Oc, Bleu de Causses and Rocamadour.

For wine, you should head to Gaillac where there are a score or more of AOC vineyards producing dry, fruity whites and rich, full-bodied reds. 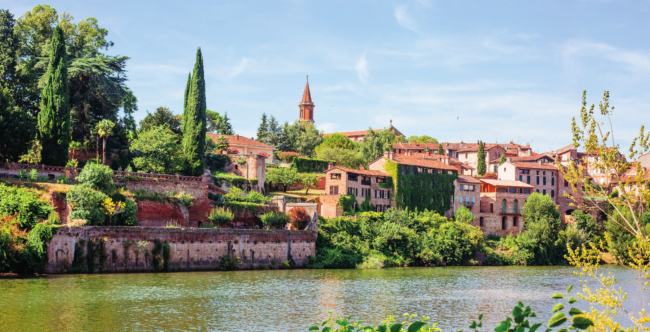 You’ll hear the phrase ‘Le Triangle d’Or du Tarn’ oftrepeated during any property search in this part of the world. The Golden Triangle in question is a relatively small area of just 200 square kms or so, in the northwest of the département, between Albi, Gaillac and Cordessur-Ciel. Three roads (the A68, the D922 and the D600) link the three towns together, surrounding a gorgeously rustic interior of rolling countryside, vineyards, medieval villages plus a beautiful section of the River Tarn that, over its entire length, twists west from the Cévennes mountains to Moissac.

Of its medieval villages, Cordes-sur-Ciel is the most famous (it has the angry builder’s trowel to thank for that), but others that shouldn’t be missed include Donnazac, Noailles, Cestayrols, Senouillac and Labastide-de-Lévis. Given the Golden Triangle’s reputation, the older stone properties obviously command a premium. But head outside its boundaries and you may well pick up a bit more brickwork for your Euros. Castelnau-de-Montmiral, to the west of the triangle, is lovely; as is Lautrec, 25kms south of Albi; and Lisle-sur-Tarn and Rabstens, further down the Tarn river. Puycelsi, on the département’s northern border, has 800 metres of ramparts and glorious views over the Vère valley. Or there’s Penne, with its lovely château and proximity to the Gorges de l’Aveyron.

WHAT ARE THE MAIN PROPERTY TYPES IN TARN?

THE STATE OF THE PROPERTY MARKET IN TARN

According to property website MeilleursAgents (www.meilleursagents.com), property prices across the département are pretty steady. Over the past year, there has been a price rise of just 0.9%. The average price of an apartment is €1,419 per square metre, while for a house it’s €1,385. The town with the most valuable property prices for houses (€1,818) is Saint-Sulpice, in the far west of the département, not far from Toulouse. This is closely followed by Puygouzon (€1,815) and Lescured’Albigeois (€1,693), both in Albi’s suburbs; and then Rabastens (€1,686), another charming town on the River Tarn in the west of the département. If you consider just apartment prices, then the most expensive towns are Albi and Puygouzon, both averaging €1,764 per square metre. Still can’t decide where to base yourself in this region? There’s always the trowel method…

Browse property for sale in Tarn>>>

Previous Article Buying in Languedoc-Roussillon
Next Article ‘Priorité à Droite’: When Do I Have Right-of-Way When Driving on French Roads?