The city of Paris is in fact one small département located in the heart of the Île-de-France region, surrounded by other seven others. The region as a whole is home to over 12,100,000 people (and the largest number of English-speaking ex-pats in France), and the capital is densely populated. The cost of living here is high, but as you might expect, services and amenities are many. Average temperatures range from 7 °C (45 °F) in February to 25.6 °C (78 °F) in August, and it rains here roughly one day in three.

The area surrounding Paris features fields and forests dotted with grand hunting lodges and châteaux, the most famous being the château de Versailles, built for Louis XIV and located within 815 hectares of beautifully kept parkland. Other popular spots are the upmarket former royal towns of Fontainebleau, Rambouillet and Vaux-Le-Vicomte, all very green, pleasant and located within a 50 mile radius of Paris. To the north, the well-heeled suburbs of Neuilly and Saint Cloud are highly rated – and pricey – in terms of property, as are waterfront locations on the Seine and Marne rivers.

There are four RER (Réseau Express Régional) high speed suburban railway lines that interconnect with the métro at major stations, running across Paris and out into Ile-de-France commuter land, making a second (or indeed, first) home purchase outside the capital a perfectly viable option for those who want to be within striking distance of the urban vibe without living it full time.

For some people the city buzz is a must, and Paris is undeniably the jewel in the Île-de-France crown. With its legendary monuments, sweeping boulevards, buzzing brasseries and oodles of romance, it’s a major tourist attraction as well as a thriving metropolis. Less than an hour’s flight or just over one-hour train ride from central London on the Eurostar, Paris is easily reached by air from hundreds of other destinations worldwide, and it has excellent rail connections to the rest of France, as well as other European destinations.

Classified into 20 arrondissements, France’s capital city offers many possibilities for prospective property purchasers. For foreign buyers, the preferred architectural style is usually the impressive, neoclassic stone building of the Haussmann era, featuring ironwork balconies, parquet flooring, cornices, open fireplaces and marble mantelpieces. However, for a more contemporary look, there are also many flats on the market within modern, well-built apartment blocks with balconies, lifts, and underground parking.

Part of the charm of living here is the real community spirit that exists within each quartier, often in evidence at the Sunday morning market, or in the neighbourhood shops and bars. Step out of the areas beloved of tourists (Montmartre, the Marais, the Île de la Cité and île St-Louis) and plunge into the backstreets of more anonymous areas like the 11th or 20th arrondissements to find Parisians quietly going about their day-to-day business and get a real feel for this stimulating city. 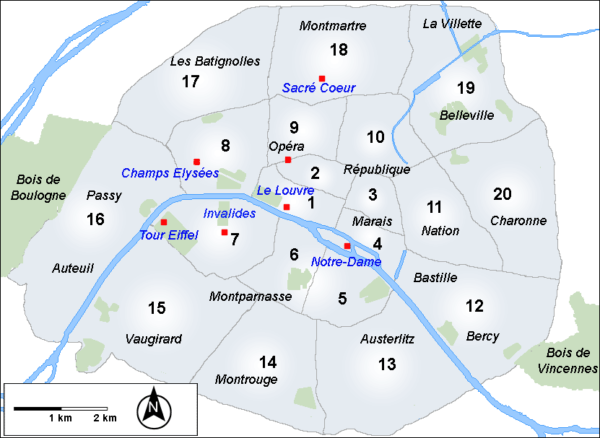 Accommodation in Paris doesn’t tend to have much in the way of outside space, unless you count the odd communal courtyard or you’ve got a sizable budget and can buy in the greener suburbs to the west such as Neuilly or St-Cloud. What you will get however is a truly cosmopolitan environment, as well as short- and long-term financial rewards. Generally speaking, the significant lack of rental accommodation in the city means that your Parisian pied-à-terre will always be in demand.

Further reading: Where to buy in Paris

If you’ve got your heart set on a French property in the beautiful Paris and Île-de-France, a phone call to the FrenchEntrée Property team is a good place to start.

•Did you find this guide useful? Get FREE regular updates with our French Property, Tax & Law newsletter and receive or FREE weekly round up of the newest and best properties for sale. Enter your email address here.