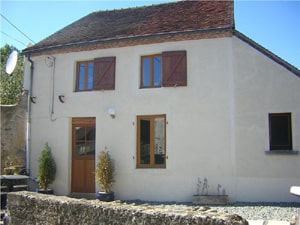 One couple agree to share their experiences with FrenchEntrée

Over the coming months I plan to keep an ongoing diary of our intended barn conversion. Some of you may wish to follow it as perhaps you are doing the same yourselves, some of you might be just want to have a good laugh at all our mistakes and under estimations as I’m sure there are many ahead…!

Not much work has started yet so I’ll begin by introducing ourselves. We are Lorraine, Stuart, Rhys (7) and Kiera (5).

Our story began 3 years ago when we moved to a small hamlet near to Magnac Laval in the north of the Haute-Vienne after deciding that we wanted a better life for us as a family. After just 2 visits to the area we bought an old farmhouse needing complete renovation.

We took the decision to rent a nearby house until the house was in a properly habitable condition. I couldn‘t face the idea of living on a building site in the winter with 2 young children and anyone reading this who knows me will agree that ‘I don’t do grubby’ very well!! I am more than happy to work in it, in fact I love it but I need to know I can come home to a nice clean, warm home at the end of the working day! Anyway, back to the story. We moved in after about 3 months of hard work alongside our builders, electrician and plumber. We then spent the next few months doing the last bits such as painting, curtains, garden etc.

During this time the kids started school and settled in very well and we spent time just generally finding our feet. We had left ourselves a pot of money that was intended to last us a year which it did (amazingly), so as we neared the end of our first year we had to make some decisions about how we were going to make a living. We had loads of ideas but wanted to make sure whatever we did would work for us as a family too. In the end we looked at what was lacking in this area and decided to set up business providing and installing satellite equipment (www.the-french-house.net ).

Not a job Stuart had done before but being very technically minded and interested in this area of work it seemed like a good idea. So off he went, bought all his equipment, taught himself all he needed to know and now he just had to overcome his fear of heights…!! Business has been going well and so never ones for wanting to sit around and enjoy it, we decided we needed our next challenge which leads me onto our story of the barn we have bought.

When we bought our current house it was always intended to be a temporary home for us. Although it is a beautiful home, we always knew we would want something bigger in time. We could have bought something bigger first off but we wanted to give ourselves that financial cushion for the first year so we opted for something smaller. I’m so glad now that we did that because we have learnt so much over the last 3 years about what we want to do in our new home. It has been a real learning curve and I know we are going into this barn conversion with our eyes wide open.

Not that it was intended to be a barn conversion. We had originally planned on buying a plot of land and was going to have a house built on it. However, we had a few criteria which meant finding land was quite hard. You wouldn’t imagine that would you when all you can see for miles is land but there you have it! We love our town and the school and we have made so many good friends here, French and English, so our main criteria was that we had to stay very close to Magnac Laval. We love our hamlet location so we also wanted another similar location and we wanted a minimum of 3000m2 of land. We didn’t realise how hard it would be..!

Any plots we did find were either non constructible, too close to the town, too small or too expensive. After a few months of searching we were becoming quite disheartened. Then our lovely local immobilier, Claude, informed us that she had a plot in excess of 4000m2, close to the town but in a hamlet location. She told us that there was a barn on the plot that we could perhaps sell off to help finance our new build. I have to admit that we didn’t build our hopes up too much as we had been disappointed so many times already, but none the less, we trundled along. It was love at first sight!! We pulled up and instantly we didn’t care too much for building on the land, we had both absolutely fallen for the barn! It seemed huge, bigger than what we would have built. Not that it was that that hooked us. I think for me it was the overall look of the barn, nice, neat, organised and symmetrical. Just how I like everything to be including my home!

The land surrounds 3 sides of it and whilst the views are not breathtaking like some we have seen, there is still something calm and natural about them, just endless fields and trees! The hamlet was just what we were looking for, it was the perfect distance into the town, the land was bigger than we had hoped for and the price was less than we imagined. As far as we were concerned the whole ensemble was more than we could have hoped for with no compromises…how lucky were we? 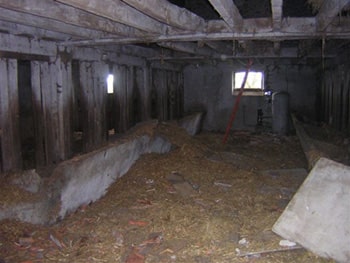 We told the agent that we definitely wanted to buy it and so the ball starting rolling. We had our builder take a good look over the property and confirmed what we believed, that the structure of the building and the roof were all in very good condition. Electricity was already there and whilst connection to the water mains would need to be done, there is at least a well with a pump that can be used in the meantime. The sale progressed smoothly, the property was given that all important CU (certificate of urbanisation) and we finally signed for it on 15th November 2006. We were finally the proud owners of a….cow shed!!!!

During this period we contacted a wonderful team of architects based near Gueret. They have helped us plan the whole project and planning permission has just been handed in so we must now wait for permission to be granted before we can do too much work. There is some work we can do in the meantime and so we have started work on demolishing the first floor. Flooring had been created using terracotta bricks which was just too heavy on the timber and is causing some to bow, so our first job was to go up and remove all the bricks. On top of the bricks was a mass of hay covering the whole surface (150m2). Ideally what we would have like to have done was clear all the hay out first before doing the bricks, however a little incident before we had even taken ownership made us a little wary of walking around too freely.

Stuart and I were having a walk around upstairs making a few plans, when Stuart said to me “with all this hay you can’t feel your footing very well”. As he finished this sentence he completely disappeared downwards with a mass of timber, bricks and hay. Fortunately for Stuart he is very tall and as he felt himself going he managed to delay his fall with his arms and headed down feet first which meant the drop was not too great for him. Amazingly he missed a solid concrete trough by about an inch and got away with a small cut on his elbow and a rip in his jeans…so there I was paralysed with fear at what might have happened to him down there when I hear this boyish giggle and the words “wow, what a rush!”.

After this incident we decided that perhaps the timbers were not as solid as we first thought. So when it came to removing the bricks and the hay we decided we couldn’t risk going up to clear the hay first so we began by smashing them from underneath. We soon discovered this would not be an easy task as most were cemented together. The best way was going to be to smash them down from up above. We put ladders between the timber and managed to smash down the whole lot in 4 hours, hay as well, and have now discovered that in actual fact the only dodgy timber was the one Stuart had his incident with!

Now we have the really laborious task of clearing out of the barn all the hay and bricks which are all mixed together. Stuarts parents who have recently moved close by have been wonderful in helping us to make a start. We are burning all the old hay and my mother-in-law could hire herself out as an arsonist the way she got a fire going in the rain.

I know… you’re thinking, “I’ve spent all this time reading and that’s as far as they’ve got!! “ Well, we had to start somewhere! I hope to keep a regular diary going so you can follow our progress. Who knows where this story will end – maybe we’ll be an inspiration to you all…or more likely, we’ll be a famous guide of how not to do it…!!!