Putting in the Joists 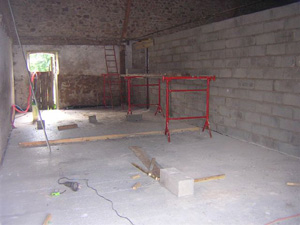 Hi again everyone and sorry it‘s been so long since the last update! As anticipated we didn’t actually do anything to the barn through all of July. August however has been a good month.

We made some final decisions about door widths and positioning so that Gary and Dan could continue building up the two block walls which will support the first floor joists. Across the openings for the doorways they made some concrete lintels to ensure that there would be enough support to continue the block walls upstairs. Initially we had no intention of using the loft space as we have more than enough space already and so we could have used all timber stud work upstairs but on reflection we felt that one day we might decide to make use of the space and so have decided to use the same joists as downstairs so that we’ll have the option to use the space if we wish, hence the block walls will be extended upwards to support the next level of joists. 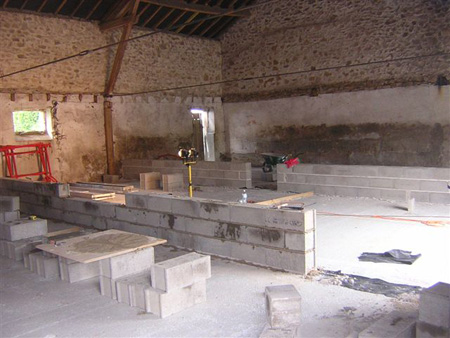 With the walls done and left a few days to dry we were ready to start putting in the joists. Stuart and I were at the barn to take delivery of the 90 joists, each 5 metres long! The happy chap from Toute Faire craned them into the barn as far as he could but we still had to manually move them to the back of the barn and they were flippin’ heavy! Fortunately Stu’s parents turned up to lend a hand which helped no end! 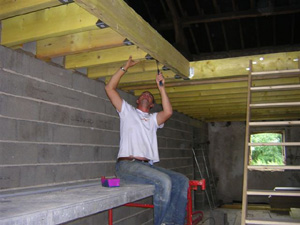 Progress was seen very quickly once the joists started going up despite having to make around 60 holes in the stone walls to support them. Unfortunately the quality of the wood was somewhat questionable which slowed things down from time to time – we had a few banana shaped lengths and a few that differed in height but eventually after a bit of juggling about and a bit of planing the whole lot was up. It was at this point that we could appreciate the size of the hallway and the stairwell as we have left a large space for an open gallery style landing upstairs. The boys have all said it looks huge upstairs but although I can get up there I’m not brave enough to skip around on the joists like they all are – I’m still on all fours at this stage! UK Health & Safety would have a field day!!

Have also tried to tackle a bit of the field this month. The kids have an area to play in now which we are trying to maintain and widen each time but it is slow progress because we don’t have much time to spend on it,. Never mind it’ll be winter soon and it’ll all stop growing at least!!

We have some good news too in that we’ve sold our house which is a great relief. We look set to sign around mid-end October and we’ll move into a friends property for a few months until the barn is habitable. They are not using the house at the moment and so have offered it to us for as long as we need it. We are so grateful because it means we don’t have any pressures time wise and it is not too far from the barn and school. It is the same house that we rented when we first moved to France almost 4 years ago so in some ways it feels quite nice to be able to go back there – it’ll be like starting our French Adventure all over again! So now, in all that spare time we have between work, the kids, visitors and the barn we just need to do a spot of packing up!!!

See you next month!

Renovating Your French Property in Winter: Tips and Tricks

Check out our wide selection of tools to help you complete your renovation projects, including power tools, hand tools, measuring equipment and tool storage. Delivery to France in 3-5 working days.