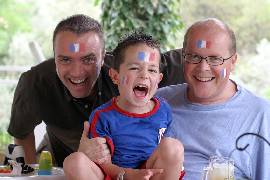 Ten years ago, my husband Mike and I decided to make our new home in Laguepie in the Tarn and Garonne. Having lived in France previously, my French was pretty good, but Mike’s was non-existent.

Today Mike is a fairly fluent French speaker with a local accent and works as an electrician for a local building company. We consider ourselves to be fully integrated and active members of the community working part time in the local library, office de tourisme and participating in many local activities. A couple of years back, the maire of Laguepie invited us to sit on the committee for the future of Laguepie tourism which was a great honour. We have embraced village life and are overwhelmed by the warmth and generosity our French neighbours have shown.

This didn’t happen overnight though. It was a gradual process, which involved a steep learning curve, and, if it wasn’t for our determination and enthusiasm we would have followed the estimated the many expats who move to the France and then follow a well-trodden path back to England.

We did our research before making the move, but nevertheless there are things that can take you by surprise. The weather for example, when the hive of activity in summer gives way to bitterly cold winter months of hibernation.

Unless you are retired or have a very healthy bank balance, financial planning is most commonly underestimated with job prospects looking fairly bleak if your fluency in French is not good. Whilst we run a chambre d’hotes it has taken time to be established and aspiring B&B and gite owners looking for an extra income will have their work cut out. We were surprised just quite how hard it is to sustain your time in France financially and can’t emphasise enough how important it is to have a realistic and open-eyed view of French life before making the move.

It has been a learning curve in more ways than one. To maintain the French lifestyle you craved, you have to accept the French way of doing things – and yes that means bureaucracy. The most difficult thing for me to get used to, as someone who runs a business, has been the slowness of everything official and the unwillingness of almost everyone French to do business any other way than face-to-face. If you wish to be sure of a result, you need to physically go to get things sorted out – whether that means driving to your Prefecture town 75km away or strolling down to your local insurance broker’s office. One thing is for certain, it is a more social way of doing business and you certainly get to know folk. It is important to remember that this isn’t paradise, not everything is perfect, and the only way to deal with it is to accept.

It always bemuses my French neighbours why the British people complain about French bureaucracy and try to challenge the process. They say, after all, why come and live in France if you don’t accept the French way! Few would disagree I dare say, but this isn’t something that is necessarily instinctive to any newcomer plunged head-first into a foreign and unfamiliar land. The French way is something that can naturally be assimilated over a longer period of time, but it saves time and moreover embarrassment and is more respectful to try to observe the more common cultural and social mores.

When I arrived in Laguepie, one of the main things that I overlooked was the protocol in social invitations. I was very familiar with l’heure de l’aperatif and enjoyed many a merry hour indulging in the local speciality. What I was not aware of was the protocol surrounding the formality of the invite. Generally in France, if you are invited for an aperitif you will be given an exact time and a place (and bring a bottle of wine or perhaps flowers – definitely not chrysanthemums or lilies that only for funerals or All Saints Day). Whilst I was courteously inviting people to pop around any time, used to my more informal English ways, on more than a few occasions I wondered why my neighbour hadn’t taken up my offer, whilst they were thinking, ‘Where’s my formal invite?’ So, as you can see, confusion can easily arise.

Another thing to note is that, in France, it is expected that you, as the newcomer, should put yourself forward. I think many British people are simply not aware of this, but it is such an important and crucial way to benefit from a fully integrated French life. Introduce yourself to your neighbours, invite yourself to community events, show that you are willing and eager to be come involved and you will be welcomed with open arms. If you hold back and wait to be asked your French neighbours may not come forward purely because they may think you don’t want to be disturbed. Remember you are the foreigner and will always be seen as such so it is important to make the first move.

The French are normally very welcoming and pleasant but can be a little suspicious of newcomers, whether foreign or simply from another region. They will see people as trying to integrate if they make an effort to speak the language and understand local customs. What is not appreciated is those who criticise loudly the French way of doing things (even though the French love to criticise it themselves!) and also those who criticise their own country too much. For the most part the French are very patriotic and they find it strange that others would run down their own country. In a family orientated society people invite others to their homes less frequently and are slower to make friends. Gentle overtures of friendship will be appreciated, too pushy viewed suspiciously. If you wish to get to know someone invite them for an aperitif, but perhaps not a meal until you know them better.

Criticising local customs – such as hunting, foie gras production, or lunch time closing can also be a cause of resentment. Even if you disapprove of such things, you have to accept that they are the norm in the country you have moved to and as such you need to accept them and disapprove quietly.

If you are unsure what to do for any given event i.e. a funeral, wedding, christening, local event, it is a good idea to ask a French friend or neighbour to guide you. This will be seen as making a real effort to fit in and will be much appreciated. Showing an interest in the commune you live in and joining in with local events will also be welcomed. On the whole the French are very civic minded and like to think that their new neighbours will behave appropriately.

As the maire of Laguepie Jacques Alaux says, “ Laguepie is a community that recognises the importance of integration in order to keep the spirit of the village alive. The best way to make the most out of French life is to integrate into village life.”

2. Keep up your old hobbies and pastimes. You will find it easier to fit in with people you already have something in common with.

4. Find out local customs and rules. If you shouldn’t use your lawnmower during lunch time or siesta, it is better to know.

5. Introduce yourself to people and make it known that you want to be sociable.

6. Avoid comparisons – saying ‘It’s easier in England because we do ….’ Is a sure way of irritating.

7.If in doubt, ask. Whether it is etiquette or administration ask a French friend or neighbour to help you out.

8. Carry a dictionary (buy several small ones for handbag, car etc) then you can always check the meaning of posters, leaflets, signs etc.

9. Remember it takes time, even if you moved house in the UK you wouldn’t expect to have a new band of friends immediately.

10. Relax – you will be forgiven if you make a mistake. People will be interested in you because you are foreign and ‘different’

How to Get a Covid 19 Vaccine Booster in France