A New Jerusalem: Renovating a Manoir in the Loire Valley 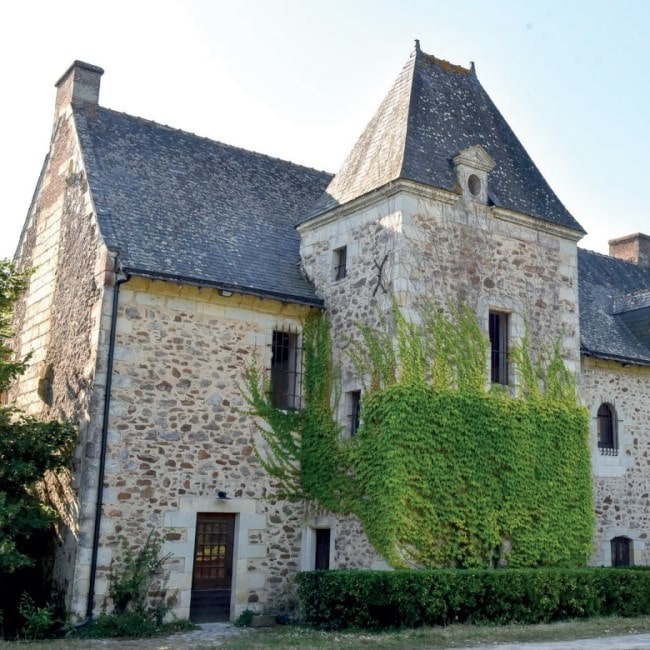 Hidden deep in the Loire Valley, the enchanting Manoir de Jouralem (the Old French name for Jerusalem) has aptly provided one couple with an idyllic new beginning, says Greg Cook.

For anyone deciding to make a new life in a new country by starting a new business in hospitality, a list of qualities beneficial to the task ahead might well include a knack for teamwork, steely determination, a grasp of logistics and courage in the face of adversity, along with a well-evolved sense of humour.

There are few professions that instil all of the above, but the armed services is undoubtedly one of them. Fortunately for Mel and Hywel Lewis – proud owners of luxury guesthouse Manoir de Jouralem in Blaison Saint-Sulpice, Maine-et-Loire, since 2017 – both have had long-standing army careers that have prepared them for this exciting new chapter in their lives.

Between them, the couple have spent time in Iraq, Afghanistan, Germany and the Balkans, but today they find themselves ensconced within wooded vales on the western edge of the Loire-Anjou-Touraine Regional Nature Park. Here, in countryside just a few kilometres from both the sedate southern banks of the River Loire and the bustling café culture of Angers, a thriving historic city that was once the seat of Plantagenet kings, they have made a home and created a stunning guest house that blends period charm with luxury mod cons.

THE PLACE TO BE…

This is a truly beguiling pocket of the world, a little corner of paradise in equal parts historic splendour, rural idyll and gastronomic majesty. Little wonder this verdant valley, a tapestry of vineyards, orchards and forests and home to many of France’s most opulent châteaux, is now one vast UNESCO World Heritage site.

For many over the centuries, this special region has come to represent France at its finest, an arcadia demarking the junction between north and south that offers visitors a perfect synthesis of the country’s most treasured archetypes and cultural exports. It’s also a part of France that Mel and Hywel had no intention of settling in.

“It’s remarkable that individually we’d always shared the same dream of what we’d ideally love to do after leaving the army, which was running our own guest house,” Hywel reflects. “Having said that, I’m a keen biker and war historian, and initially I was drawn to the idea of running a place in northern France, catering for people who wanted to take motorbike tours of the famous First World War battle sites and war graves, so we actually began our property search up in Picardie and Champagne-Ardenne.”

“I, however, had always imagined myself somewhere far more warm and southerly, surrounded by sun-kissed vineyards,” laughs Mel. “So I was quietly delighted when I finally convinced Hywel to come searching for property in the Bordeaux region. Lovely as it was, we just couldn’t find anything there for our budget that quite ticked all our boxes. Not least somewhere with the immediate ‘wow’ factor we wanted both for our guests, and ourselves.”

While stationed in Germany, the couple would search for property online and drive down over the border to investigate anything promising. It was only when they realised they’d been doing this for nearly two years that they began to explore an area south of Picardie and north of Bordeaux; the Pays de la Loire. “It was encouraging,” recalls Mel, “a lovely region of vineyards and châteaux, with good weather and an awful lot more available for your money.”

If proof were needed, it wasn’t long before Mel and Hywel found themselves rolling up a drive just off a small lane in the countryside southeast of Angers, and arriving in several acres of unadulterated ‘wow’ factor. At the centre of this, surrounded by an array of quaint outbuildings and mature trees, stood the elegant structure of a 16th-century manoir, a picture-perfect ideal of a stately, but not too grandiose, historic country residence. The building comprised of steep, slated roofs, broad stone mullions and tall windows. Its façade was adorned with Virginia creeper climbing over old stone walls the colour of crème brûlée.

“It may have taken two years, but when we arrived here we knew, without doubt, we’d finally found what we’d been searching for!” recalls Hywel.

Another reason the couple so vividly recall the week in early June 2016 that they finally discovered their dream French property was that it was the same week that the UK voted to leave the EU.

“It’s fair to say this place made its impact on us right from the start,” says Mel, “because although I can remember us being shocked by the referendum result, it took us no time to follow our hearts and make an offer regardless.”

“We had a place in the UK that we were going to sell to largely finance this adventure,” continues Hywel, “but as interest rates were so low, we decided to borrow against it instead, which wasn’t a bad idea. However, the paperwork generated by going that route meant that we didn’t sign until December, so we didn’t actually get the keys here until April the following year.”

By this time, as well as getting a large three-storey manoir entirely refurbished and ready to welcome guests (not to mention converting a neighbouring outbuilding into a comfortable cottage for themselves to live in initially), the couple had another exciting event rapidly approaching.

“By this point, I was also heavily pregnant with twins,” explains Mel, “so any plans we’d had for opening later in the 2017 season had really gone out of the window. What we needed was a decent family home, although we obviously also needed to get the business up and running and welcome paying guests as soon as possible.”

Fortunately Mel and Hywel were able to assemble a talented team comprising architect, artisan builders and tradespeople from the local vicinity. It was just as well considering that, aside from general renovations and repairs to its existing historical fabric, the manoir needed new plumbing, a new heating system, a complete rewire, a new kitchen and luxury en-suite bathrooms attaching to the four bedrooms upstairs that would become the first guest suites. On top of which they needed their own accommodation – now for a family of four.

“Given our slightly altered circumstances, we decided to stay based in the UK until September, by which time the twins would have arrived and we’d have a converted outbuilding to live in while renovations and refurbishment of the manoir were completed,” Hywel explains. “Unfortunately,” continues Mel, “only one of those two things had occurred by the deadline, which was we now had two newborns, Sophie and Jamie, to be bringing over with us.”

The work on the building wasn’t so obligingly punctual. “The outbuilding we were supposed to all be living in was so far from complete that we all ended up camped in the manoir. In hindsight, I’m actually glad it happened that way, as it really gave us a proper feel for the building, a much better understanding of how to treat it in terms of décor and the best ways to update it without disturbing the historical fabric.”

“That was very important to us,” agrees Hywel, “having since spoken to the mayor here, who’s also a bit of a local historian, it appears the first recorded mention of the manoir dates from 1545, but there’s likely been a building on this site since the 13th century. We obviously wanted to deliver mod cons, comfort and luxury, but never at the expense of that provenance.

Mel and Hywel organised a soft launch in November 2017, “basically inviting lots of friends over for a catered free weekend in return for their feedback,” as Mel explains. “It was actually really useful in helping with fine-tuning, not to mention just what lay ahead regarding our workload when the place was full.” The couple finally opened the manoir doors in summer 2018.

In terms of what to offer their guests once established here, Mel and Hywel, had never been in any doubt; rooms brimming with character and period features, large comfy bedrooms with luxurious en suite facilities, a newly created fresh-water swimming pool for summer surrounded by a thriving wild garden and log fires crackling in the home’s impressive stone fireplaces during the chillier months. Then there are meals served using the best-quality, seasonal and locally sourced produce, accompanied by wines from the vineyards that provide the view around the manoir.

ALL IN THE DETAIL

“We’re both keen and dedicated cooks, and we love creating dishes with what’s available here,” enthuses Mel. “We’ve spent many years going to fine-dining restaurants and boutique hotels for special occasions, and we logged away every particular detail we really loved – just for when this moment finally arrived.”

“It’s lucky we’ve both got the same pretty broad skill set because, thanks to the twins, we’ve pretty much worked in shifts when it comes to taking care of our guests,” Hywel observes with a smile, “but the feedback we’ve had after our first season has been truly amazing. And more than just making all the effort worthwhile, it really feels like our masterplan has been well and truly vindicated.”

“It’s certainly not a bad spot for a holiday,” laughs Mel, “and not bad for raising a family either.”

Dreaming of Buying and Renovating in France?

If you’re looking to buy a French property, set up a gîte, or move to France, our Essential Reading guides are designed to talk you through every step (and potential misstep!) of the process. Once you’re ready to get searching for your dream house, you can browse our property for sale or sign up for free to become a FrenchEntrée member and set up customisable property alerts. The market is moving quickly at the moment, so make sure you don’t miss out!

Browse our French property for sale

Lead photo credit : Manoir de Jouralem dates back to the 1500s, but it’s likely there’s been a building here since at least the 13th century © MEL AND HYWEL LEWIS

Previous Article What a Difference a Day Makes: a Day in the Life of the GBP/EUR Exchange Rate
Next Article News Digest: France Under Fire After Champions League Final Shambles