Diary of a Barn Conversion in the Limousin – Part 11 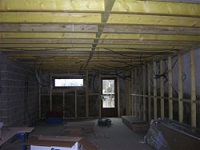 At the end of December we had a budget review and came to the conclusion that we would really need to tighten our belts if we wanted to get the project finished to the standard we hoped. We haven’t gone too far over budget on our initial plans but having decided to opt for more expensive windows and doors and the heating/air con system it has meant that our costs have risen considerably. Unfortunately this has meant that we will need to finish the project mostly by ourselves which will inevitably slow things down a bit. A bit disappointing because it was feeling like we were nearing the finish line and the extra hands would have been a real bonus at this stage. 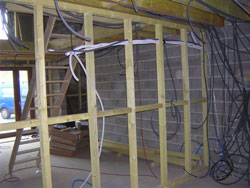 However, after a much needed break over the xmas period we cracked on with the work in January with renewed energy. The builders continued into the early part of January finishing the timber studwork framing out all the upstairs ceilings as we didn’t feel confident of doing this ourselves as there were too many influencing factors with the roof timbers and structure. Unfortunately, we have had to compromise on the ceilings in what will become the children’s bedrooms. We really didn’t want to have any of the timber featured (a crime I know in a barn, but that’s what we want). However due to the structure it would have meant losing too much on the head height on the mezzanine floors so we have had to leave several perlings revealed which I know will still look great but it just wasn’t the look we wanted. This done, the builders have packed up their tools and left us to it until they return to do the plastering later on.

Throughout the rest of January we finished off the remaining studwork so with all the rooms now defined we were able to run all our socket cabling upstairs. Doing this ourselves has been a really good exercise in fact because it has made us think hard about what exactly we will want and where. I don’t think I’d have given such detailed thought to this if our electrician had been doing it all.

Whilst doing the studwork we also had a good think about where we might want to hang pictures, mirrors, rails and cupboards etc so that we could make sure that there is enough support in place. I then took lots of photos and noted measurements to make it easier when we come to putting in the finishing touches to the interior.

We have also spent some enjoyable time this month (well, for me anyway) shopping for bathroom fittings and various other nice bits and pieces. I’ve bought some gorgeous glass blocks in pink and purple for a design I have in mind in the hallway (though I think Stu still needs convincing on this one!). I can’t wait to get everything out their boxes. It beats shopping for timber and screws anyway! The kitchen has also been delivered which I was quite excited about, though we’re not ready to fit it yet so at the moment it’s just taking up more space!

February has been another good month. The heating engineer, Stéphan, has run all the necessary cabling and pipework. I’ve included a photo this month of the cabling involved which looks quite a piece of art! Stéphan will return again once the plasterboard is all in place to fit the interior units on the walls and the heat pumps to the exterior. 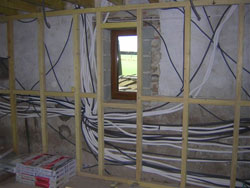 After a lengthy lesson from our electrician, Ken, in the French way to install lighting, we have undertaken the mammoth task of running all the cables needed for around 150 recessed down lights as well as a few others. Ken has been brilliant, he has guided us along the way and helped out with some of the more difficult switching issues, though we won’t tackle the technical bits so he will be back to do all the wiring up in junction boxes and the consumer unit later on. It has saved us a lot of money by doing the majority of the donkey work ourselves in physically getting the cables from A to B through studwork and blocks, and again this has been really good for us to really plan exactly how we want our lighting to work. It’s looking a bit like spaghetti junction at the moment but it’s organised chaos really.

Occasionally on a bad day we look around and it feels like we still have so much to do but on the whole the project has gone really well and it feels like the end is in sight. We are a long way over our initial schedule for moving in but it won’t be too long now – our revised date is for around the end of April or early May but I’m ever the optimist!

Thanks for reading, see you next month.