Diary of a Corrèze Conversion 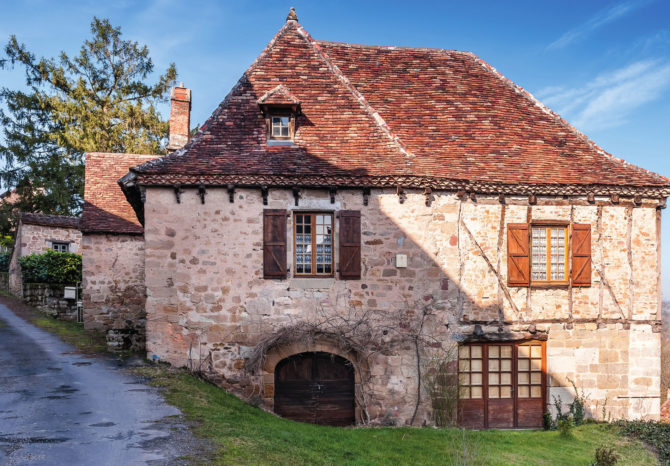 Setting up a Limousin cycling business -Dalles and Digging

As Tim and James were making their way through slating the barn roof, our French Contractor Remy arrived to start the dalle (foundations and concrete platform) for the extension that would link the barn with our house. Our Architect had faced multiple challenges when designing the shape of the extension – the boundary fence gave the space a wedge shape; an existing retaining wall needed to be incorporated; there needed to be a terrace large enough for 12-16 diners on the west side; the area was not level, dropping 1.5 metres between the house and barn. On top of this we wanted a very large kitchen and an interesting building. David excelled himself with the design and from the moment that we saw the plans there was no going back to anything sensible easy and rectangular. 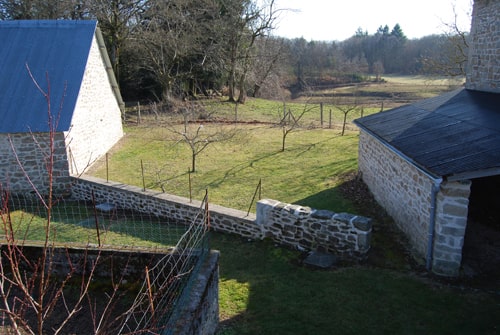 Of course this meant several virtual nosebleeds whilst trying to map out the building on the ground as there would be 2 sections with multiple compound angles. I finally managed to get a good string line plan marked out on a hot July day. Just as I had finished, Johnny, Carpenter Tim’s lovely Collie cross, decided to help me out by charging around pulling up most of the markers as he got tangled in the string. Once reinstalled Remy then prepared marker boards to map out the actual trenches for the footings. We also had to determine the exact levels of the site using our existing kitchen floor as Point Zero and calculating everything else in relation to this. For me this was the most complicated and critical part of the entire build, luckily James was occupied on the barn roof and could remain blissfully unaware of the nail biting on the ground below as Remy and I planned it all out.

There then followed a frustrating wait as we had given the job of excavating the site to our neighbour Jean Louis. Every time we asked him when he was coming we would be told ‘Beh Oui – certainly tomorrow or maybe the weekend’. After 4 weeks delay and some tense conversations with all concerned we were finally relieved to see John Louis trundling up the lane in a ‘Pel’ Digger. Over the next 2 days our garden turned into a muddy building site made more entertaining by a big summer storm. 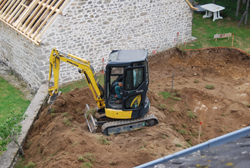 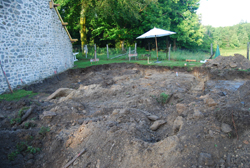 Remy then came back to clear and board up the trenches for the first cement pour. With the position of the house, barn and potager, access was always going to be challenging. The solution for the cement lorries was to use a huge extending hose that was able to go over the roof of the house 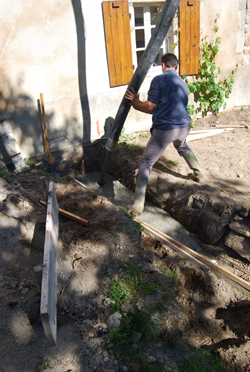 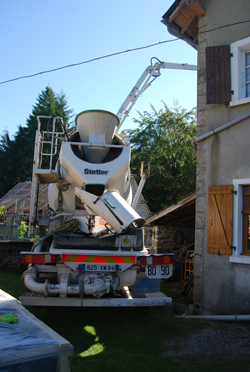 After a week of drying time, Remy started to lay the block work that would support the raised dalle. At this time I also had to calculate the exact positions of all the waste water pipes, plus the electrics for the central island unit in the kitchen that would need to run under the dalle. The pipes were attached under the beams using metal supports which were graded in length so that the water would easily run out to the new fosse (septic tank) that would be installed later. 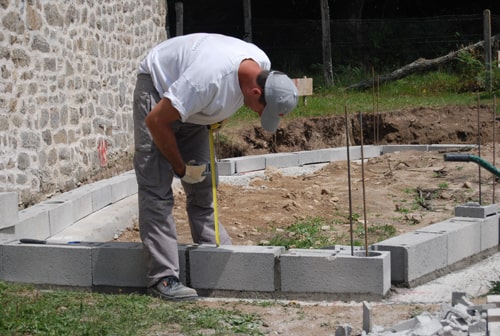 Once the block work was completed and allowed time to dry, concrete beams were laid across the width of the building. As with everything associated with our unusual design, these had to be made to length and so were more expensive than standard beams. Would the end result be worth it?
Blocks were then laid suspended between the beams to create the floor and the whole area of just under 100 square metres was then covered with the metal trellis that would bind the concrete together. 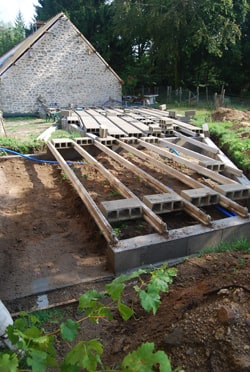 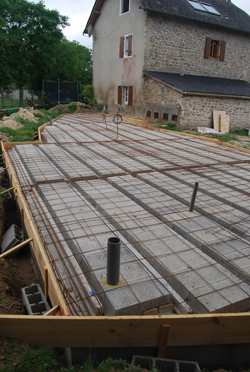 Once wood shutter boards had been fixed in place around the edge of the dalle it was then time for more Beton lorries to arrive for the final pour of cement which would bind together all the blocks and give us our finished subfloor. Unfortunately this coincided with the hottest day of the year, so it was all hands on deck to spread the concrete and spray it with water to stop it drying too fast and cracking.

The pour went well, but we had to keep spraying the finished Dalle every hour until after dark. It wasn’t until the next day that we could breathe a sigh of relief that no cracks had appeared. True to form our boys hadn’t seemed to notice all the work going despite being on school holidays, and memorably William (then 11) came round the corner of the house and said ‘Wow! Where did that come from?’

The final step was for Tim and I to lay out the wood base plate onto which our timber frame would be attached. Slowly and carefully we worked through the architects plans marking out the positions of all the doors and patio windows and adjusting them as necessary now we actually had the real thing to work with. It was at this time that I could calculate the length of walls available for kitchen units and other pieces of furniture and make sure that things would fit where we finally wanted them. The finished dalle was tangible proof that we would eventually realise our goal to set up a company running cycling holidays in the Dordogne, but this did still seem a long way away

You can read part 1 of Sam’s story here

You can read part 2 of Sam’s story here

You can read part 3 of Sam’s story here

Lead photo credit : The perched village of Curemonte in Corrèze is one of the ‘Plus Beaux Villages de France’