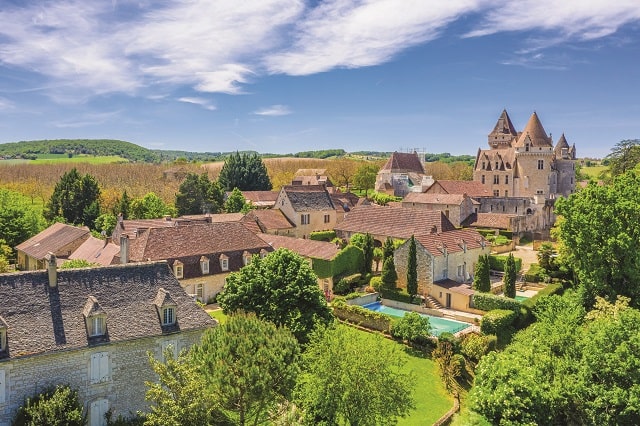 When the Chapmans stayed at their favourite Dordogne guesthouse on a house-hunting foray and fortuitously found it was for sale, they snapped up the pretty manor, says Nicola Venning.

When Christopher and Sarah Chapman visited the Dordogne in 1990, their friends recommended they stay at a charming B&B called Les Milandes, a manoir of honey-coloured stone as French as its pretty cream shutters, nestling in the rolling countryside of the lush Périgord Noir. “It was in a valley with three or four other châteaux and sitting above the Dordogne river,” Christopher recalls. “It was magical.” 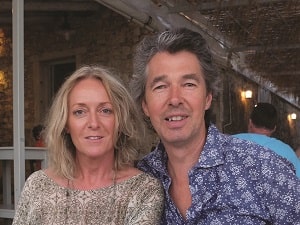 In fact, just a short stroll from Les Milandes is the turreted, compact, fairy tale-like Château des Milandes, which was once owned by American-born, French entertainer Josephine Baker. Rumour has it that her entourage sometimes stayed at the manor. So enchanting was Les Milandes that when the couple decided to buy a home in the area 10 years later, they once again checked in at the, now slightly tired, B&B. It was a fortuitous visit.

“The Dutch owner was selling; he showed us round and we totally fell in love with it. It had a renting capacity as well, so we went for it,” says Christopher, who has experience managing property, having bought and run hotels. In September 2000, barely a month after deciding to buy it, they exchanged contracts and by early 2001, became the proud owners of the 18th-century French manor house.

“We literally did it on a handshake and everything went through on the nod. It was meant to be. We were completely romantically involved and it was fun.” The elegant manoir – which has six bedrooms, four bathrooms and a family-friendly garden – was once part of a small hamlet that included a mairie (town hall), post office and restaurant. These buildings now belong to Les Milandes and have been converted into three gîtes that sit on the square opposite the main house. The gîtes were part of Christopher’s business plan, as, given the popularity of the area, he knew they, and the house, would all let well.

But before Christopher and Sarah could start accepting paying guests, the house needed to be updated. They decided that one of the most important improvements would be a new communal kitchen/dining area. However, communicating what they wanted was tricky. Christopher’s French was rusty at best and the requirements were complex, to say the least. He therefore hired a local English architect, recommended by his solicitor, who had been living and working in the area for years. The architect helped them design the new space and handled the bureaucracy, obtaining the necessary planning permission from the local town hall, hiring workmen and overseeing the conversion.

Creating a new kitchen/dining area meant not only removing the old kitchen situated at the back, but also converting the dining room in the centre of the house into a much larger space to accommodate both a kitchen and eating area. In order to do this, a large staircase had to be taken out of the room. 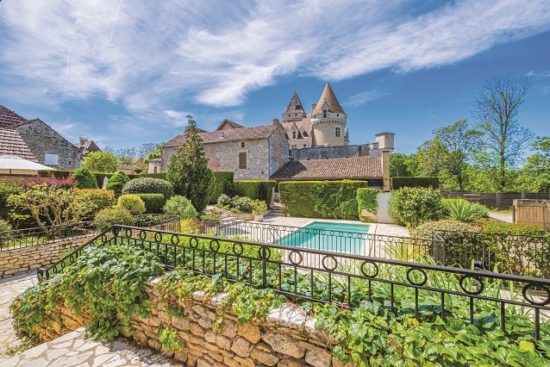 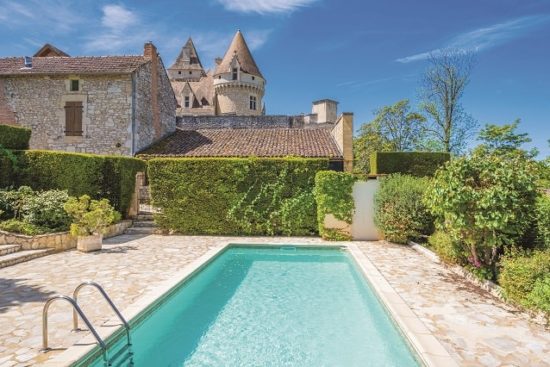 “It was a huge job,” Christopher explains. “It was a fairly major staircase (there are still two others in the house). We think that originally, prior to 1740, the house was divided into two separate buildings: a house and a barn, which is why it has so many staircases.” But as the dining room staircase was being removed, disaster struck: the builders discovered that the old beams (supporting the ceiling above) were rotten and could fall in at any time. “It was a fairly major issue. We had to quickly prop up the rest of the ceiling and then put in an RSJ [steel beam],” he goes on. Fortunately, the ceiling did not cave in and the new beams solved the problem.

The rebuilding work complete, Christopher and Sarah fitted a hand-crafted wooden kitchen with island counter, laid a new floor and added wood panelling to the walls to create an inviting and easily accessible space. The kitchen/dining room is now an airy communal area, which is located on one side of the stone entrance hall, while the elegant salon with its large welcoming fireplace, is on the other. “It has a really nice open-plan feel, and you can look from one end of the house to the other, right the way through,” he says. As well as putting in a new kitchen, they also modernised the bathrooms, adding integrated showers in the baths and retiling where necessary.

Christopher had the basic electric wiring checked and upgraded, and did the same with the plumbing. Fortunately the pipes and boiler passed with flying colours and needed no further improvements. “The house has an amazing boiler giving lots of hot water and that is a blessing. It was installed by some American owners, at great expense, years ago.” The only other major refurbishment was gutting one of the cottages to create a more liveable space. “We literally knocked out every wall and rebuilt the interior,” says Christopher, who hired local tradesmen.

“In terms of artisans, joinery and carpentry, there are still immense skills down there, probably more than in the UK.” Stonework was repaired where needed and new private terraces were added to each of the gîtes, along with stylish outdoor garden furniture. “The UK public are discerning, so we brought the gîtes up to a standard where we could let them out,” he says. A third (small) swimming pool was added, which two of the gîtes share, while the third gîte has its own pool – as does the main house. “I don’t think you would get planning for an extra pool anymore. So having three is quite good news,” he enthuses. 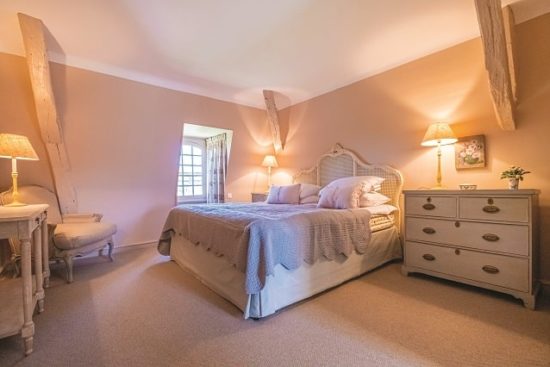 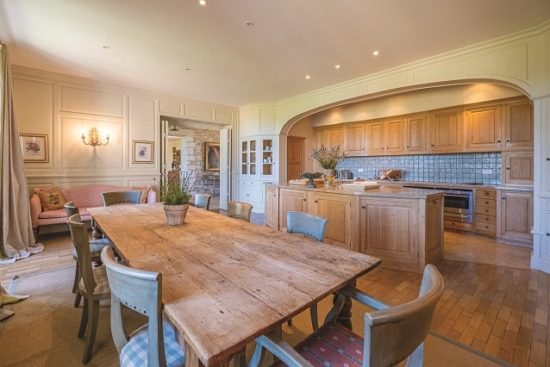 The house is decorated in a classic country house style, with large comfy sofas, gently patterned curtains and traditional oil paintings on the walls. Typical décor, such as Toile de Jouy – a traditional pastoral wallpaper that is popular in France – gives the rooms a characterful French twist. The interior design is simple and understated while period features, such as exposed beams and wooden floors, create warmth.

Christopher has most of the maintenance done in the winter months when the properties are generally closed. During the 20 or so years that they have owned Les Milandes, he’s regularly undertaken upgrades and repairs – whether that is relining pools or replacing carpets. “I have always wanted to keep things ahead of the game, rather than getting on  the back foot. Even if it is on the market [Les Milandes is for sale with Leggett estate agency], we are not going to stop improving because the lettings market is important for us.”

Les Milandes is regularly let over the summer, “though we do use it a lot”, Christopher points out. “We had our 25th wedding anniversary down there a couple of years ago. And several birthdays. It’s a great people and party place. Sometimes we take all the houses, sometimes one or two. In total it can sleep 25.”

Though it has a reasonably-sized garden (about a third of an acre), Les Milandes does not have the vast amount of land that often accompanies large homes. Christopher feels they have the best of all worlds. “We have terraces and gardens, but we don’t have acres and acres that you have to mow and do something with and that can be very hard work,” he says.

As well as being a very elegant home, much of Les Milandes’ appeal derives from its hilltop position, which affords stunning views over the Dordogne countryside. The valley is also home to the imposing, medieval Château de Castelnaud and fortress-like Château de Beynac, which stand more or less opposite each other on either side of the Dordogne river. “Basically, the Hundred Years War was fought there. There is a lot of history and the river is fabulous. It’s a life source.” 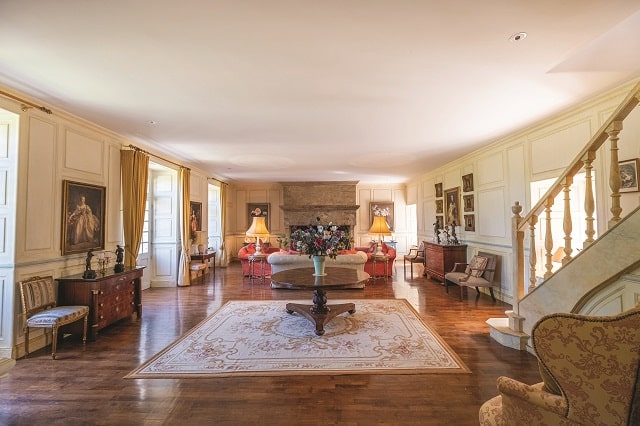 During the summer, the Château des Milandes and its magnificent grounds are periodically open to the public. A riverside pleasure garden built by Josephine Baker, with tennis courts and swimming pool, is also occasionally open to visitors. Les Milandes itself is about two hours drive from Bordeaux, which “these days is a vibrant and exciting city” and well worth a visit, says Christopher, as is the beguiling winegrowing area nearby. It’s also a hop and a skip from medieval Sarlat, one of the prettiest and most coveted towns in northern Dordogne. While Bergerac, with its international airport, is about 50 minutes’ drive away.

“We often fly from Southampton and can be at the house within four hours. And sometimes we drive there, which is quite fun.” Reluctantly, after 20 years spent running Les Milandes and feeling that much older, he and Sarah believe it is time to move on and embark on a new challenge. “The weird thing is that it’s just worked,” he says. “It’s been an utter joy.” 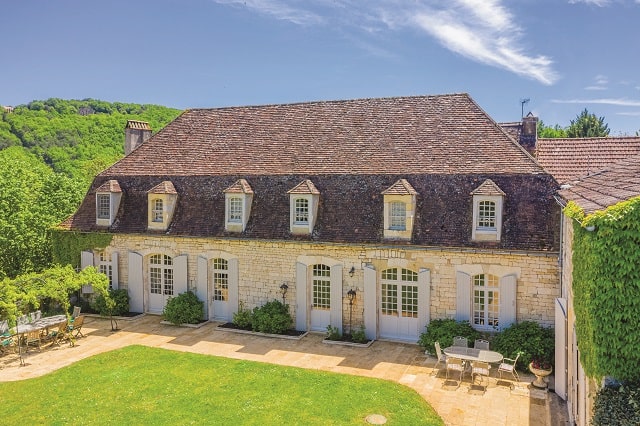