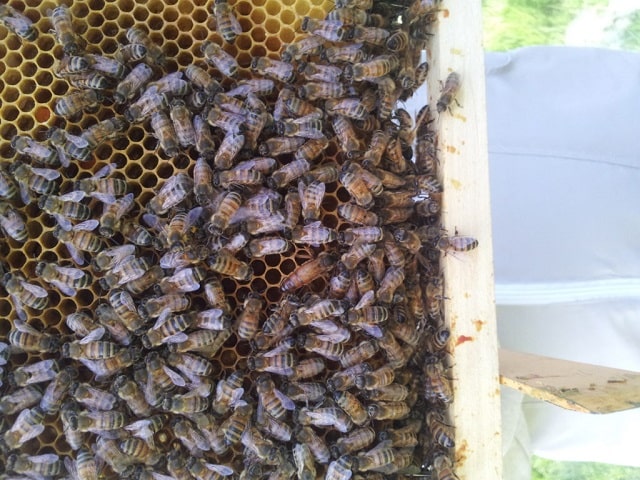 Amanda and Kevin moved to Confolens in the Charente in 2015, opening a chambre d’hôte and launching their beekeeping experience holiday business. They live with five cats, two tortoises and several thousand bees, and enjoy sharing their adventures in the apiary with others. We spoke with them to get some expert advice on how to get started in the beekeeping business.

As hoped, March did indeed go out like a lamb and in the Charente at least we enjoyed a run of sunny warm days at the end of the month. Having waited patiently for the temperatures to rise so that we could make our first hive inspections of the year, we were able to do so last week. One of the things to remember as a beekeeper is that bees don’t read books, so they are prone to not doing exactly what you expect them to do. We had to keep this in mind when we opened the first hive to find the colony had disappeared – the brood box was completely empty, no bees, no brood, no stores, nothing, just vacant wax frames. This colony had been fairly weak but it was still a surprise as they had been flying and feeding on sugar syrup only a few weeks before. There was no sign of disease though, so we hope that they have simply decided to join the colony next to them which does have a lot more bees in it than we expected.

Second-hand hives can be used again provided that they are cleaned properly to ensure there are no pathogens passed onto the next colony of bees to inhabit them. Cleaning is simple – just use a blow-torch to lightly scorch the inside of the brood box, taking care not to set fire to it(!). A weak solution of washing soda can be used on the plastic floors, and new frames are advisable.

A beekeeper is looking for five things while inspecting a hive, plus a couple more at this time of the year. I check to ensure there is a laying queen in the colony, and that the brood is as expected. This means that I am looking for larvae in cells, and flat sealed brood…my eyesight isn’t good enough to spot eggs in cells that easily, but if it’s a sunny day I can sometimes see the minute grains lying in the cells, close to where there are small larvae. Eggs, larvae and sealed brood are a good sign that there is a queen, but it’s nice to see her and so I spend a bit more time on these initial inspections to try and spot her. Once you see the queen she is so obvious and large that you wonder how you missed her before, but if she is marked then the whole process is much easier. You may be able to spot the long slim amber-coloured queen to the centre and just up from the bottom in the photo. If your queen is unmarked now is a good time to change that. A small ring is placed around the queen and, using a special marker pen, a coloured dot is put on her thorax. The colour denotes the year:

If our queens were marked then they would have white dots on them showing that they were hatched in 2016. Any new queens emerging this year would be marked with yellow dots.

Provided there is a laying queen then the next thing to look for is to check there is food in the hive for all those hungry mouths. Are there plenty of nectar and honey stores? Are the bees flying in with pollen? This week our bees are collecting bright orange pollen from dandelions and yellow pollen from mahonia and crocuses.

A laying queen also means lots more bees so is there enough space for them all? If the bees feel overcrowded then they will prepare to move house, and they do this by swarming – making a new queen that they will leave behind when they fly out with the original queen to find a new home. Queen cells are larger than ordinary worker bee cells, elongated and hook-shaped, so this is something else to look out for. Part of swarm management is spotting and dealing with any queen cells that have been built by the colony. We noticed a handful in one of our hives and took the decision to split the colony, forcing an artificial swarm. That way we know we haven’t lost any bees as we’ve ‘caught’ the swarm. We moved the queen and some frames of brood, food and bees, into another hive, leaving behind the original colony with its queen cell, knowing that over the next fortnight a virgin queen will emerge and hopefully go on her mating flight, returning to lay and ensure the future of that colony.

To give the bees more space to move into, we also added queen excluders and super boxes to each of our hives. These are fitted with shorter frames and are intended for food stores only, hence the queen excluder. This is a plastic mesh that fits over the top bars of the brood box through which the bees can pass but the queen cannot as she is that much bigger. This means that there will be no eggs laid in the super frames, making the eventual honey harvest a lot easier. ‘Easier’ is a word that all beekeepers love!

The last thing to check for is disease. The hive should smell faintly of honey; anything else needs to be investigated, and some of the more infectious diseases that affect honeybees such as European Foul Brood smell horrible and are very serious. Check that the bees look as you expect them to look – if there are any stunted or damaged wings then you could have a varroa mite problem and will need to treat accordingly. Carrying out a varroa mite drop check is easy enough to do, just place a board under the hive and leave it there for 24 hours. At this time of year an acceptable drop count is around 5 per day; anything else needs to be treated urgently.

So, having carried out our first inspections and taken swarm management action, we have taken the added precaution of placing two bait boxes high up in trees near our apiary. These are small boxes containing a few frames of foundation and liberally sprayed with ‘bee charm’ to attract any swarms that may be in the neighbourhood. We could be lucky and acquire some new bees; we could also catch any of our own swarms if we’ve missed any queen cells! 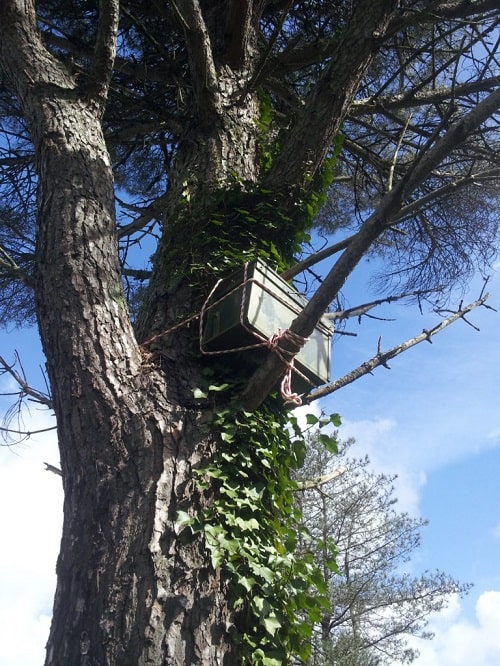 Good luck with your inspections and please get in touch if you need any beekeeping help or would like to attend one of our afternoon taster sessions running from the end of April throughout the spring/summer months.