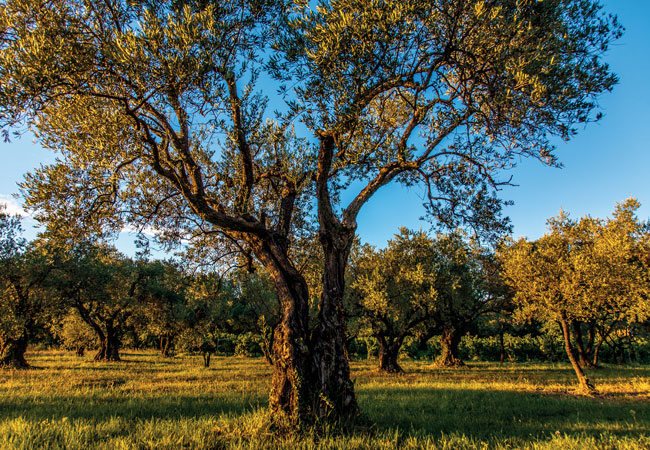 You fall in love with a property in the South of France, it has olive trees and you buy it. What do you do? You make olive oil, of course! Patrice Bertrand finds out more

There’s something unspeakably romantic about olive groves, despite the fact that their cultivation requires a lot of patience and hard work. For Garry and Michèle Price in the Drôme, and André and Louisa Coetzee in the Luberon, it’s been a hard slog to reap the rewards the small black fruits bring – and the paybacks have come in ways you wouldn’t necessary expect.

“This year we have a lot of olives,” says Garry, catching hold of a branch as he and his wife Michèle pick their way through the olive trees on their  property, which overlooks the small town of Nyons in the Drôme. “But anything can happen: there may be a lot of olives and then, just before the harvest, it can rain, the olives get waterlogged and fall to the ground. It’s a hard job. But here, it’s paradise.” 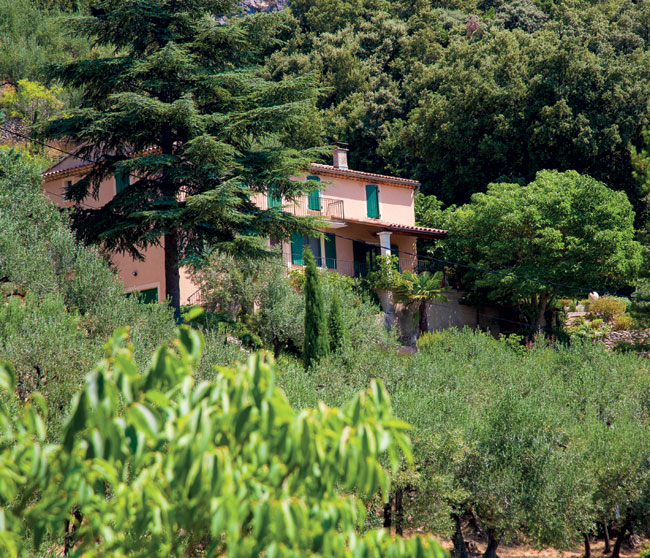 Paradise for the Prices is 18 terraces of olive groves nestled almost vertically against a mountain, and a pretty house with ochre façades surrounded by rosemary and cypresses. It is there that, for almost 20 years, Garry, an American (and a naturalised French citizen), and his French wife Michèle, have harvested their olives – the famous wrinkled ‘tanche’ of Nyons, often called the ‘black pearl of Provence’.

The Prices are rare expatriates among the 4,575 olive farmers of Provence, which produces 70 per cent of French olive oil. And when expats become olive farmers, it is more often by chance than personal choice. When Garry and Michèle thought of leaving London to settle in France, they never imagined they’d spend their retirement caring for 325 olive trees with love and passion.

“It all happened by accident,” says Garry, who worked in international marketing and advertising. “We came here for the first time in December. As it was late, we stopped at a hotel in Nyons. The next day, when we opened the shutters, the sun was shining and the olive leaves were dancing in the wind. My wife said, ‘I never want to leave’. We immediately started looking for a house.” It was chance, again, when they got lost while driving in mountainous Devès, overlooking Nyons, and stopped in front of the gates of a house that was exactly what they were looking for. 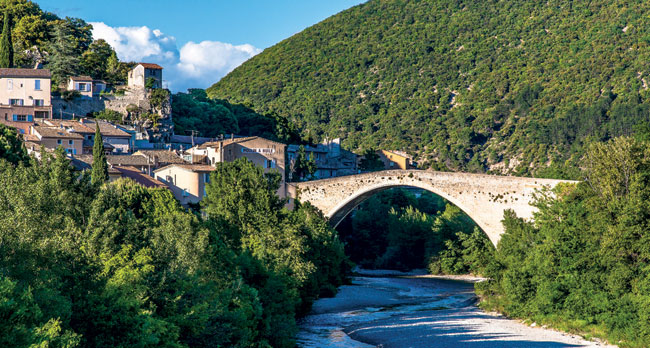 “The owner was out front and we asked her for directions,” says Garry. “We started talking and she said that she couldn’t sell her house because  nobody wanted to take care of the olive trees. We came back several times, we offered to buy the property and she eventually said yes.”

From the start, Garry and Michèle decided they would take care of the olive trees. At first, they used outside contractors to prune them and remove the branches. They also found a mill in Nyons to buy their olives for bulk resale or for making olive oil, and, at the same time, they renovated the house. But, although they thought they held the keys to paradise, the experience almost became a nightmare. The reason was the complex regulations that, in France, govern the protection of agricultural land.

In fact, the Préfecture of the Drôme challenged their right to exploit olive trees under the pretext that they were not qualified, and proposed renting their land to a young farmer. “We were flabbergasted,” says Garry. “But we decided to fight. It took a year and a half. We went to a commission of about 40 people, who asked how long we were going to exploit the olive trees. Michèle replied, ‘Until I die!’. We won and we are still here.”

Since then, Garry and Michèle have put all their heart and energy into bringing this fragment of paradise to life – with a lot of hard work and often unpredictable results: 450 kilograms of olives last year, 350 the year before, but three tons three years ago, an exceptional harvest!

“Today, we do everything ourselves,” says Garry, who gained farming experience in Kentucky when he was younger. “You have to fertilise the trees, trim them, fight against parasites and the terraces are difficult to access. We start harvesting at the end of November. We do it by hand, spending several hours on the ladders, picking until it’s dark and we cannot see the olives anymore. Sometimes we get help from family.” 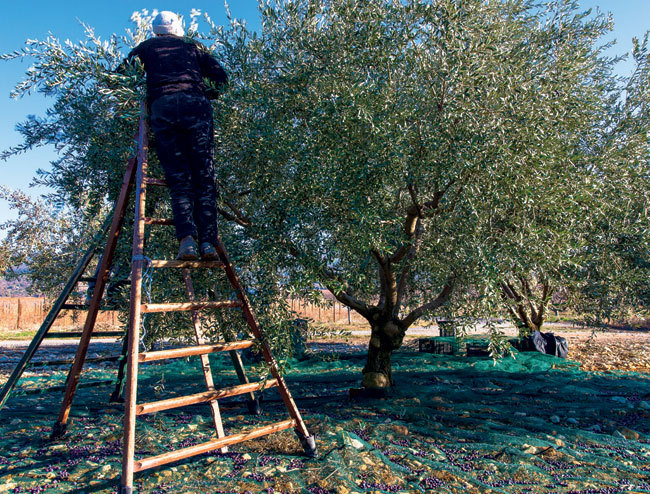 Once harvested, the olives are taken in crates to the local mill where they are sorted and calibrated, the largest – around 10 per cent – becoming table olives, the rest being pressed to make oil. Mixed with the oils of other local producers, it is then sold by the mill under the Protected Designation of Origin (PDO) “Nyons Olive Oil”, one of eight PDOs in Provence for olive oil. Since it takes between four and five kilos of olives to make a litre of oil and because the mill takes a significant portion, Garry and Michèle usually get just enough oil for their personal needs. Is all this work worth it? “We do it for pleasure, rather than necessity,” says Garry. “It helps us pay for the upkeep of the property but, frankly, in some years we lose money. On average, we make a profit one year out of three. But Garry, who turned 70 in August, intends to continue. “When we can no longer climb to the top terraces to take care of the olive trees, we’ll find someone else to do it,” he says. 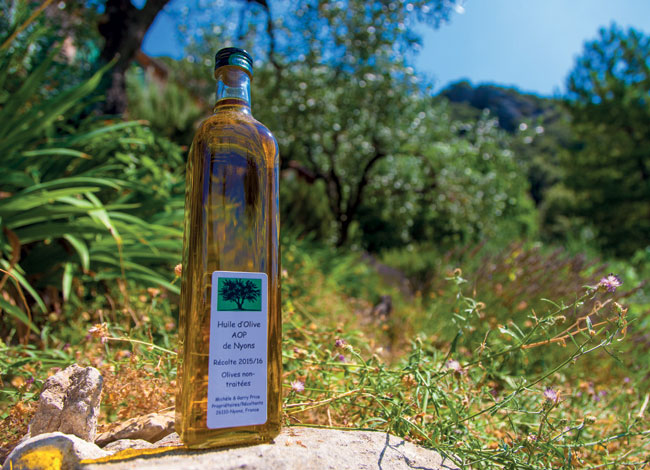 It’s another world, 100 kilometres further south in the Luberon, where André Coetzee and his wife Louisa also became olive farmers by chance. In 2012, they bought the Domaine de Gerbaud, a property of 37 hectares with 1,200 olive trees, located near the pretty village of Lourmarin. Today, not only do André and Louisa farm the olive trees, but they also sell their own olive oil.

“I never really planned on becoming a full-time farmer and I knew nothing about olive farming,” explains André, a commercial lawyer based in Hong Kong. “I wanted a property with some land because I thought that maybe I would grow some grapes and make a small quantity of wine for our own consumption. We often holidayed in this area and I was looking for an interesting place to buy. In the end, we chose this one, but it was a far bigger enterprise than we had anticipated.” 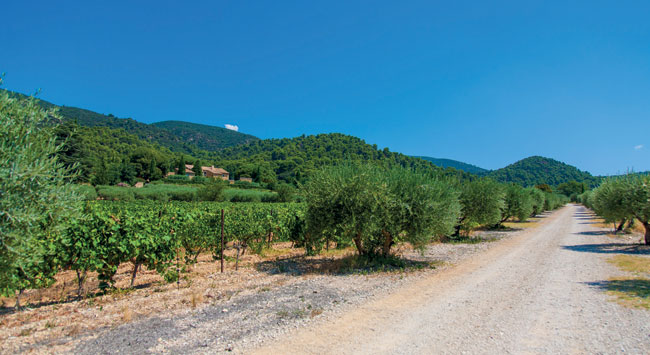 The couple spends less than three months a year in Lourmarin, sharing their time between London, Hong Kong and André’s native South Africa. Because of this, they have to employ a farmer to take care of the property. “And I take care of the commercial and marketing side,” says André.  Depending on the year, the Domaine de Gerbaud produces about 10 tons of olives, used exclusively for oil.

To obtain the best mix possible, two different varieties are cultivated. They are not picked by hand though. To harvest them, machines shake the trees, making the olives fall down onto nets resting on the ground. Then, they are immediately taken to three different mills where they are pressed. The oils come back to Domaine de Gerbaud, where they are blended by a consultant. Finally, they are bottled and sold under the Domaine’s name in local shops or shipped to London or Germany.

“French olive oil is very expensive compared to those from Italy or Spain,” says André. “Here, it is a specialty product. People buy it because they come and visit Lourmarin and they take home a bottle of local olive oil to remind them of their holidays. It is not something they buy to use in their house all the time.” 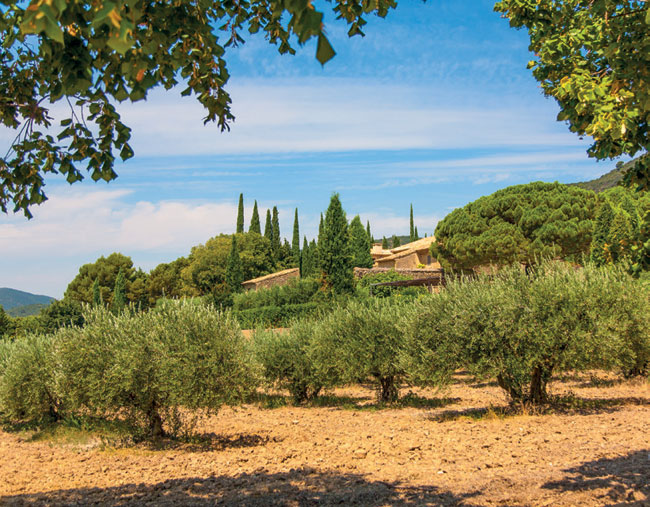 It’s a precarious business and like other olive farmers, André is faced with the unpredictability of harvests due to weather conditions. Sometimes they can be extreme: in the winter of 1956, catastrophe struck when a severe frost killed two thirds of the olives trees in Provence. Last year, he had a reasonable harvest, but the olives were small because of the drought and there was not much juice in them. He got about 2,500 litres of oil and the year before, only 1,600 litres.

“This year, the quality will be better because we had quite a bit of rain in May and June,” he says. “But because of the rain and the wind we lost a lot of the flowers. It will be a very small harvest.”

André also owns a few hectares of vineyards. He sells the grapes to the local cooperative, which makes the wine he dreamed of producing, too.

So, what drives him and Louisa? “I don’t make any profit – I try to break even,” answers André. “It’s a very difficult way of making a living unless you do all the work yourself. It is still – more or less – the same old means of production. But this is a lovely place to be, and at least we keep the property going. If I was looking at it purely from a business perspective, I would not do it. It’s more about lifestyle.”

Browse property for sale in Vaucluse>>>