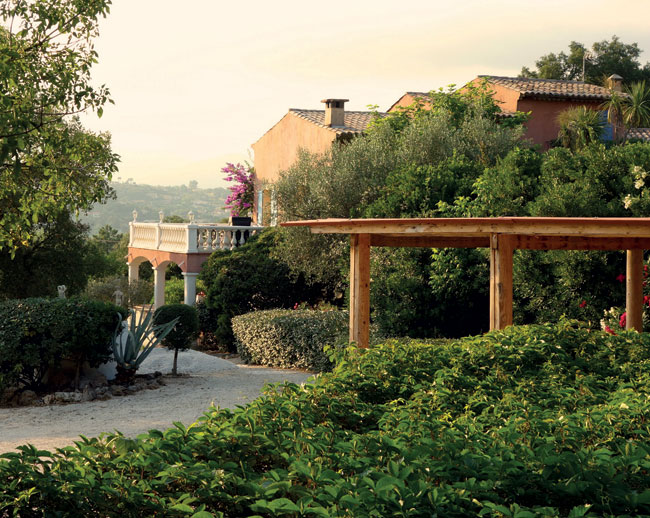 As soon as they clapped eyes on a faded farmhouse near Saint-Tropez, Katrina and Christophe Denoux knew they had found a diamond in the rough, says Nicola Venning

For Katrina and Christophe Denoux, the vision of a holiday home in the south of France became reality twelve years ago. Yet when the couple, who hail from Australia and France respectively, started searching for a property, finding their Provençal idyll was not easy.

Katrina, who works as a university lecturer in sustainable tourism in Sydney, and Christophe, who has a background in finance, scoured France’s Mediterranean coast from Nice to Sète. Despite viewing more than 40 properties, they could not find anything that fitted the bill. Either the positions weren’t right or the rooms were like “rabbit warrens”, according to Katrina. So they did not expect much when a local agent mentioned a farmhouse  near Saint-Tropez. Built in the 1970s on the site of an abandoned stone bastide, the 2,700 square foot house overlooked ancient chestnut forests, vineyards and rolling hills. It was only a ten-minute drive from the bustling resort, but the run-down hunting lodge felt as though it was in a different world. Sitting in over an acre of garden, it was private, quiet and spacious. “The agent’s particulars made no mention of the views, which are wonderful,” says Katrina. “We wanted a house that had a rejuvenating and tranquil feel, and this house has that.”

After a protracted buying process, Katrina and Christophe finally paid close to €700,000 for the house and took possession in 2006. They spent the next seven years – and some €400,000 – turning it into their dream home. 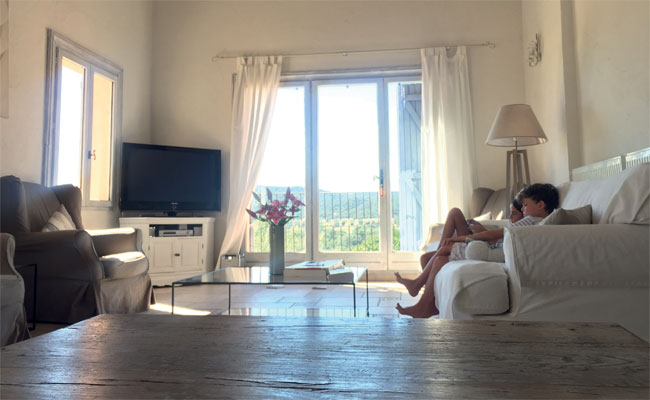 “The living room and dining areas were already open and the kitchen was a really good size,” says Katrina. The house did not require major structural work, (no vital walls needed to be knocked down), although it did need an “exhaustive refurbishment”.

A family friend, who was a resort architect, helpfully drew up plans for the restoration. One of the first jobs Katrina tackled was the kitchen. While keeping its open-plan layout, she removed the “awful” 1970s tiling and had the counters, floor and walls redone in natural warm stone “to keep in line with the natural beauty of the area”. High, vaulted ceilings and stone walls lent a natural charm, and when a new but traditionally-styled Rangemaster cooker was installed the whole room was given “a new lease of life”. The former work-a-day kitchen where cuts of wild boar had once been chopped up was now a centre for “olive oil production and tartes aux abricots et figues, making good use of the fruit and olive trees we’ve planted as a family”, she says. 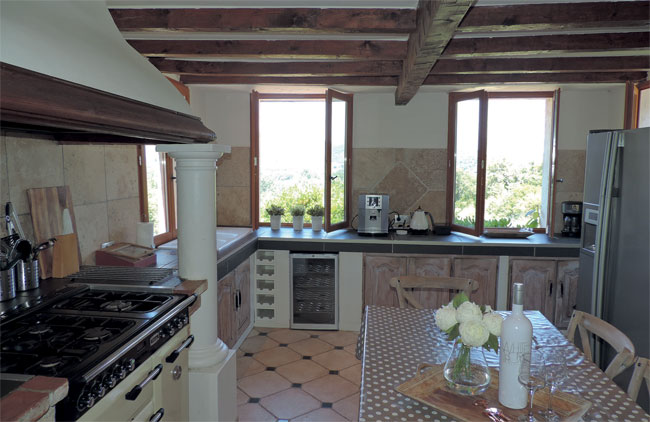 As Katrina and Christophe continued their renovations, family from far-flung parts of the world were keen to visit – and happy to muck in. Aunties and uncles pruned the lavender bushes and bougainvillea, and repainted the French shutter doors in bleu lavande. Those vivid shutters and the apricot-coloured exterior walls are a sunny reminder that the villa could only be in the glorious south of France.

After the couple had two children, and knowing that they also planned to let out the villa when they weren’t using it, Katrina realised it was important to have a home that was “big enough to accommodate all generations comfortably”. They therefore had the basement turned into two bedrooms with en-suite bathrooms, adding a small summer kitchen and French doors onto a private terrace. Closed off from the main house, this has become “a wonderful new space as a sleep-out for (visiting) teenagers, or for grandparents to have their own quarters while still being close to the family”.

The existing bathrooms were refurbished and became en-suites to the main bedrooms. The old freezer room, where hunting trophies of boar and game had once been stored, was converted into the main family bathroom. Now resplendent with Provençal blues and golds, it reflects the summery  countryside tones. A ‘wow’ feature was added in the form of an elegant bateau bath. The sixbedroom, five-bathroom home now sleeps fourteen people, comfortably. 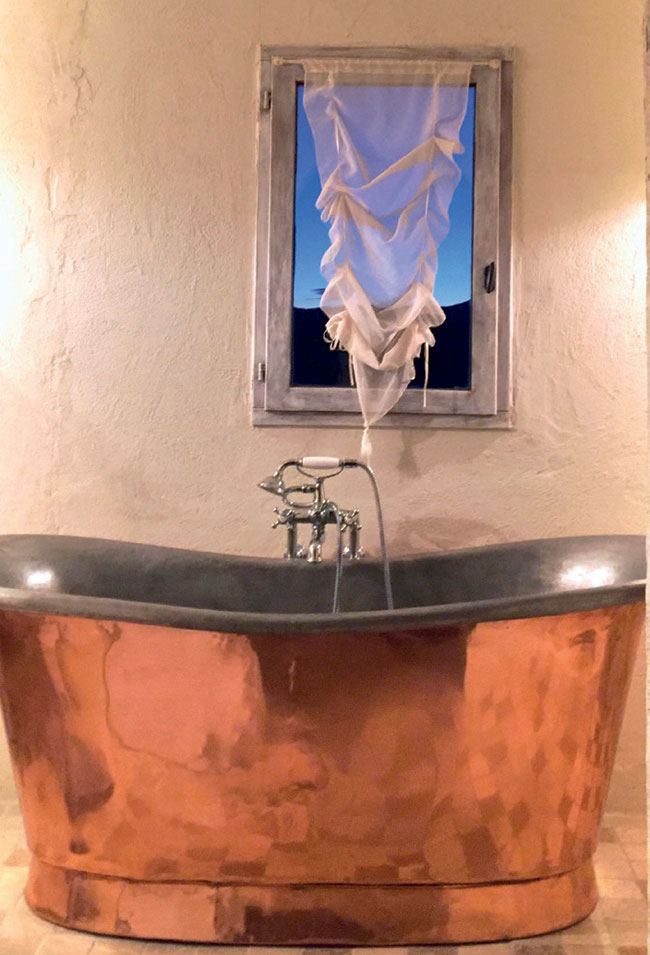 Katrina continued the rustic-chic Provençal look she had established in the kitchen by using the same natural stone tiling throughout the house. This theme has been echoed in the muted, earth-coloured lampshades and refurbished oak doors, a mellow contrast to the cool, white walls of the main living areas and bedrooms. However, as a protective measure, busy hallways and children’s bedrooms were painted in taupes and pale blues.

Meanwhile, soft fabrics in the linens and bedroom curtains create a romantic air, particularly in the master bedroom, which has nets draping around a four-poster bed. Pictures of Provence and the Mediterranean coast decorate the walls, as well as posters of cult movie Les Gendarmes de Saint-Tropez and one of the town’s most famous residents, Brigitte Bardot.

“It’s homely with a little bit of glitz and a nod to Saint-Tropez,” says Katrina. The blue and white stripes of the beach clubs are echoed in the blue and white stripes of some of the summer bedding and sunbed covers. Katrina swears by the homeware shop Marinette in Saint-Tropez for soft furnishings, eau de toilette, candles, and an “amazing range of waterproof table linen”, she confides. Unique period features such as floral wooden carvings under the eaves and on some of the walls, particularly between the living and dining rooms, have all been retained. “The old owner said these were rescued from a fire at Château St Tropez many years ago and rebuilt into this villa,” says Katrina, adding that the carvings were also, in part, the inspiration behind the name of their home, Villa Tropez. 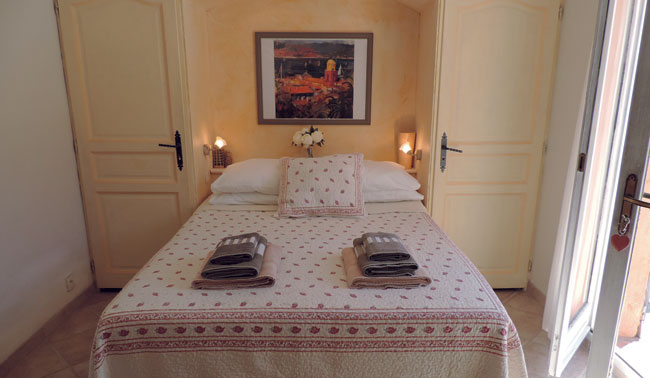 Outside, two extra terraces with shade were added so “they are an extension of the house”, says Katrina. With the rental market in mind, the gardens now have a large pool with swim-up bar and children’s wading area, a pool house and sun deck, all next to the villa. The nearby pizza oven and barbecue area is popular in summer as “guests love collecting lavender and charbon (dried grapevine offcuts) to use as kindling.” 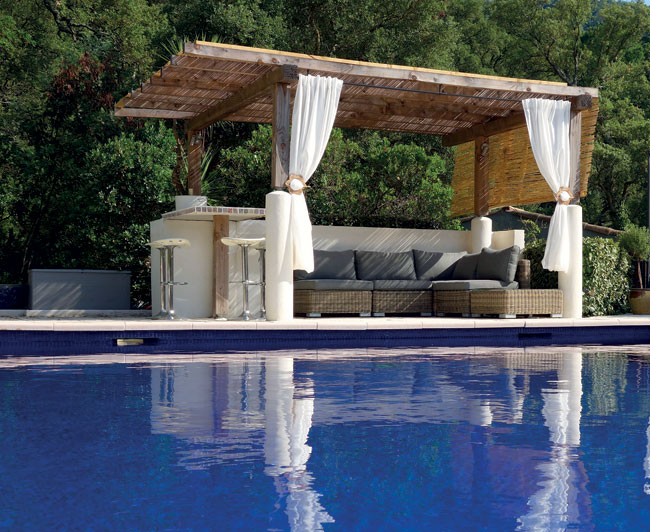 Other amenities include ping pong and boules. Christophe and his brother “had fun researching the ultimate boules pitch, which needs many layers of gravel”, says Katrina, who has herself added a fitness-cum-yoga studio for wellness retreats.

Regularly let for family get-togethers, Villa Tropez is also popular with corporate events such as film and fashion shoots. Most of all, however, it is a family home. Tucked away down country lanes, Villa Tropez is a short cycle ride to the village of Cogolin and its boulangerie, shops and cafés. Excellent hilltop restaurants can be found in nearby Gassin, Grimaud and Ramatuelle. The area also has several vineyards, which Katrina and Christophe enjoy visiting. In fact, the couple toyed with the idea of creating their own so they can have their own Château Denoux. Unfortunately “the kids quickly claimed this cleared land as a football pitch instead”. 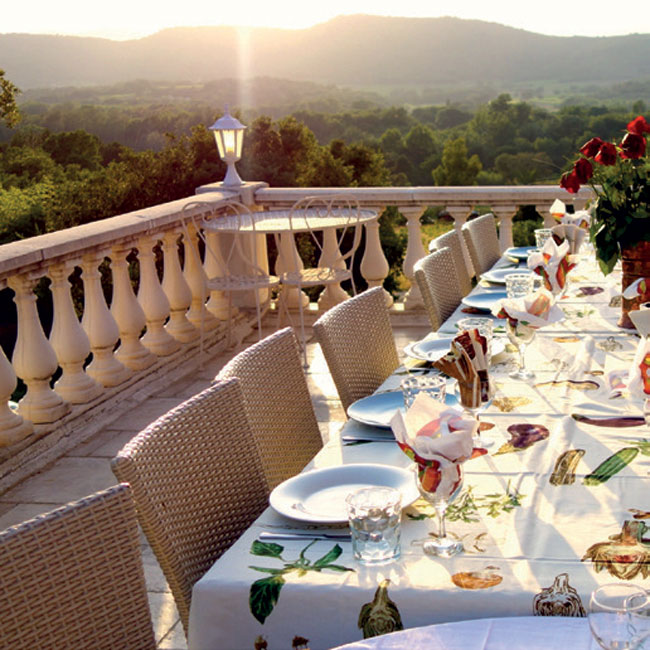 Despite the charms of the surrounding area, Katrina and Christophe like nothing more than relaxing at home. “Flopping in a big, comfy sofa and enjoying the views is just spectacular,” says Katrina.

Browse property for sale in Saint-Tropez>>>