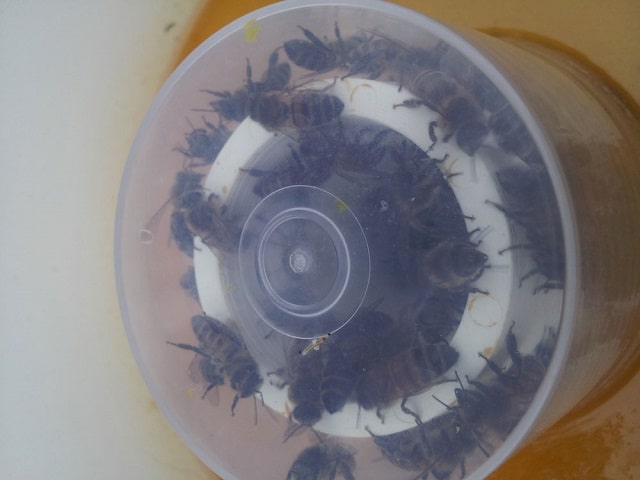 September can be a busy month for beekeepers, even though the main work of honey harvesting is normally over by this time. In 2017 the weather has been unusually volatile, with hot sunny days interspersed with low temperatures, a lot of rain and high winds, and so quite a few bee-related activities have been delayed, including the honey harvest which we would normally have done in August. It’s easy to forget that bees don’t make honey for us, they make it to see them through the winter, so if we take it all then they won’t have anything to eat during the cold months when they can’t get out to forage and even if they do, they won’t find anything.

Now is a good time to assess the level of stores that you have left your bees, assuming you have taken some of their honey. Typically a colony will need a minimum of 18kg/40lbs of honey to see it through the winter months, and this will have been stored at the top of brood frames and in super frames. If your bees have less than this then you will have to feed them a strong sugar syrup to give them a chance to store enough to feed them until they can forage again.

You can assess the amount of stores left by doing a thorough inspection, but it’s also a good idea to have a ‘feel’ for how heavy a healthy hive should be, so that you can check on them when the weather isn’t good enough to open up your hive. A full hive – brood box plus frames, brood, bees and enough stores weighs approximately 36kg/80lbs. Bearing in mind that a single bee weighs only one tenth of a gram, you can see that bees don’t make up much of the overall weight of a hive!

Hefting a hive is as simple as lifting one corner and making a call as to whether or not it is heavy enough. You can also weigh the hive using a luggage scale by tilting each side and adding the two weights together. Don’t just double the weight of one side as winter clusters won’t necessarily be in the centre of the hive.

If in doubt then it is a good idea to feed your bees a winter strength sugar syrup which can be bought or easily made. Recently in the UK there has been a starvation warning where bee inspectors have found colonies with few or little stores, so it’s a good idea to err on the side of caution and feed your bees. There are lots of hints and tips on how to make sugar syrup but a simple method is as follows:

There are several types of feeders available on the market: contact feeders, Miller feeders, and round feeders. All of them are effective and it is up to your personal preference as to which you use. I find round feeders the easiest but you do need to check on them frequently as they don’t hold much (about 2 litres of syrup) and bees can take this in a matter of days if they’re hungry!

In September it is also important to check on the status of varroa infestation in your bees, as they are likely to have built up over the summer as the colony’s population reaches its peak. You can do this by carrying out a mite drop count. Place a white board or piece of card under your hive (provided you have an aerated floor; place this inside the hive if the floor is solid) and leave it for 24 or 48 hours. Remove it and count the number of varroa mites you can see (be vigilant – they will hide among the other hive debris). A colony with an average daily mite drop of 20 in September will need to be treated urgently as it is likely to struggle otherwise.

Varroa mites will be present in your hives so the first thing to do is not panic; treatments are available. There are several different kinds, ranging from those based on thymol and other essential oils, to chemical treatments and synthetic pyrethroids, and more recently the sublimation of oxalic acid. It’s important to follow the instructions faithfully, whichever option you choose, and not be tempted into using twice as much or doubling the dose – varroa mites will just adapt and become resistant to these treatments.

There are some who follow the ‘leave well alone, nature knows what it’s doing’ system of beekeeping, and up to a point I would agree. However, varroa mites are a relatively new enemy and bees have not yet evolved to fight them off or resist the diseases that the mites carry, so I think that as responsible beekeepers we owe our bees a chance. Most treatments work best when the temperatures are above 15c so time is of the essence – any later than October and it’s probably too late to use them as they won’t work as effectively as required.

As ever, if you have any beekeeping questions, please don’t hesitate to get in touch with me by email or phone, or visit our website (details below). Happy beekeeping! Amanda, 13 Bees

Amanda and Kevin moved to Confolens (16) in 2015, opening a chambre d’hôte and launching their beekeeping experience holiday business. They live with five cats, two tortoises and several thousand bees, and enjoy sharing their adventures in the apiary with others.