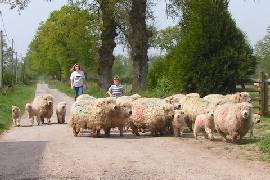 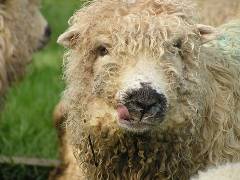 We had been thinking about moving to France to farm for some years but like many people we never got much further than dreaming about it and looking at the occasional property on various websites. Things changed, however, following the arrival of three boys in two years, when it rapidly dawned on us that our current lifestyle of running a smallholding and looking after three children while both holding down full-time jobs to pay for it all was totally unsustainable.

After a fact-finding mission to central France where we looked at farms, spoke to as many people as possible who had done something similar, and got a general feel for the country and the area, we returned to Somerset and immediately put our house was on the market. Four months later we signed a compromis de vente on a 117 ha livestock farm in the north Haute Vienne.

That done, we then had to approach the logistics of completing the move and it was obvious looking around our property in Somerset that a lot of our accumulated paraphernalia was going to have to go – but what about the Dartmoors? We had started a flock of pedigree Grey-face Dartmoor sheep some 10 years previously. At that time despite having a proud history, the breed had been in serious decline for a number of years and had been placed on the Rare Breed Survival Trust (RBST) ‘at risk’ list. We initially started with three ewes brought from a family friend who had one of the oldest established flocks in the country, and from there we had built up to a small flock of 25 ewes of known bloodlines and parentage.

We enjoyed our Dartmoors. They are attractive, docile, good mothers, and possess strong characters in their own way. To get rid of them just didn’t feel right, and although we were buying a farm that came with 500 ewes and 40 cows, we decided to keep the Dartmoors. Steve, my husband, reminded me that of a farmer that he used to know on Dartmoor who when asked, as he inevitably was, why he bothered keeping Dartmoor ponies out on the moor given that they are virtually worthless, replied: ‘because when I’m p****d off with the sheep and I’m p****d off with the cows I can go and work with the ponies…’ And I suppose we felt the same might be true of our situation and the Dartmoors – almost three years later, I can tell you that it is!

This decision taken, we then had to jump through a number of legal hoops. Only sheep from a scrapie (known as tremblante in France) monitored flock can be exported to France. There was great confusion over the definition of a scrapie monitored flock, especially when dealing with a small flock. No-one at DEFRA was prepared to give a definitive answer to our questions and it was down to our very helpful and pragmatic vet to sort it out.

Also rams need to scrapie genotype ARR/ARR (the most resistant genotype for scrapie) and be blood tested and proved negative for Brucella ovis before export. This was duly done – only DEFRA did not tell us this had to be done fewer than 10 days before the crossing date which meant our rams had to be retested! DEFRA was very hard to get solid information out of – nobody seemed to have any definitive answers to anything! 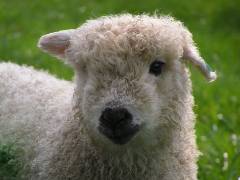 But finally, we managed to get the Dartmoors loaded up and across the Channel. All the export papers enabled them to be accepted onto French soil and they were checked by a representative of the French Chambre D’ Agriculture.

The Dartmoors had a somewhat rocky start to their French life. Our wise old vet in the UK had told us to be ‘prepared for high losses to start with…’ due to first time exposure to a wide range of diseases present here in France that seem less prevalent/virulent in the UK, and that was very definitely the case. Strains of clostridial (bacterial) diseases such as Pulpy Kidney and Braxy seem to be more prevalent over here, perhaps due to climate, and consequently our new arrivals were hit hard, with the more susceptible animals succumbing. Also they had been put under stress with a long journey when in lamb, different climate etc. which would definitely have had some effect on their health status. Now, however they have fully adapted to their surroundings and settled in well.

We also realised that we had a selenium and cobalt deficiency on our new farm. This is a relatively common problem in sheep, although often unrecognised despite the fact that a large part of Europe has been recognised as deficient in selenium. Selenium deficiency can result in poor fertility, reduced vigour in new born lambs, stillborn lambs and reduced growth rates. Blood tests revealed we had a problem here and the sheep (Dartmoors and the commercial sheep) were each given a multivitamin selenium bolus – and the results were dramatic. with the ewes performing at levels comparable with those that we achieved in the UK with an average lambing percentage of around 150%.

We have retained all of our ewe lambs in order to rebuild our flock and have some available for sale. The majority of the ram lambs are sold for meat through our local producer co-op, and we have been pleasantly surprised at how well these have graded in terms of carcass quality, certainly on a par with the average for the commercial flock which is predominantly Texel/Charollais breeding.

Interestingly, although we often run the Dartmoors as a separate flock, when mixed with other ewes they often stay together in a definite group, away from any other sheep. They have favourite fields which when given the opportunity they will make a beeline for. Several of these fields are not sheep proof having been fenced for cattle, yet the Dartmoors will happily remain there as long as there is sufficient grass, in marked contrast to the commercial sheep who will be out and travelling down the road at a rate of knots at the first given opportunity.

A rare breed in the UK, the Dartmoors are even rarer in France (currently we have the only registered flock on the continent). Their arrival here has caused quite a stir, and although we are well off of the beaten track it is amazing how many people have seen and commented on them. We have had enquiries for breeding stock from several quarters including neighbouring French farmers.

They are great sheep for people with a few acres, who want mobile lawnmowers and indeed the breed would have been lost if it was not so attractive to smallholders. They are easy to care for and can make great pets or alternatively taste great also! Where we are (central France or more southerly) they do benefit from shearing twice a year to combat heat stress, although this is not essential.

Our ewes are given ad lib hay in the winter and in the last 6-8 weeks leading up to lambing are given sheep nuts at a rate of 0.5kg/head/day. Supplementary feeding for in-lamb ewes must be rationed carefully or the lambs could grow too much in the last few weeks of pregnancy, leading to difficult lambing.

The sheep can be kept outdoors all year but a building is a good idea overnight – trying to catch a lambing ewe by torchlight in the middle of a dark field is not fun!

We generally have some stock available for sale and are happy to give any advice about them. The breed society, which keeps a record of all registered animals, is also very helpful and can be accessed at Greyface Dartmoor. We have both registered pedigree stock and unregistered pedigree stock (that might not be exactly what the breed standard dictates) for anyone wishing to start a small pedigree flock or someone who wants to have a few pretty sheep about!

Previous Article How to DIY a Swimming Pool
Next Article Points on your French driving licence?

Guide to Buying a Vineyard in France

Farming at a Snail’s Pace