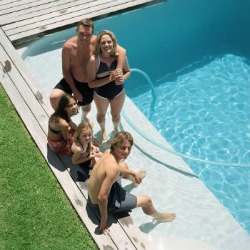 Everyone should be aware of the law governing pool security in France. All in ground pools in France must comply by having one of the four approved methods of security system in place, the law applied from 1 January 2006. The fine for not complying with the law is €45,000.

On ground or semi in ground pools are not affected by the law and normally just rely on a security ladder or one that gets taken away when the pool is not in use.

We hope to help clarify how you can comply with this law if you already own or are considering purchasing a swimming pool in France. It’s been specifically put in place to protect children under five but anyone with kids will understand that NO security device can replace the vigilance of a responsible adult at all times.

The law was originally passed on 1 January 2003. To comply with the law, the standards for pool security systems have been set by AFNOR (the body responsible for French safety standards) so that any method of security fitted must conform to the specifications set out in each category of security device.

There are four types of approved security system:

It should also be pointed out at this stage that any security device can either be self certificated by the manufacturer, who declares that they have made the system in accordance with the AFNOR standard, or, certificated by the manufacturer AND certified and tested by the LNE (Laboritoire National d’Essai). This is an AFNOR, recognised laboratory that is involved with setting out the standards for pool security systems. Any device tested by the LNE will be given its own certification number, it’s considered to be homologated and will carry the NF mark.

There are dozens of types of pool security fencing now available in France. There are flexible mesh barriers, metal barriers, UPVC barriers, Perspex and transparent PVC panelled barriers and wooden fences. Although not everyone’s ideal choice, a barrier is one of the best options for pool security.

No natural boundaries can be considered as a security barrier eg: hedges, banks, ditches etc.

For collective usage pools (pools used by more than one family) particularly gites, campsites and so on, there must be a self-closing, self-latching gate which opens outwards away from the pool. Most systems available have this type of gate as standard.

For private pools a barrier system can be fitted with a manually operated gate, but should sill have a childproof latching system.

The main advantage of a barrier is that it needs very little maintenance, so once it’s installed you can pretty much forget about it. As long as any gate fitted is tested occasionally.

Another option for a barrier is of course, a wall. There are important parts of the standard that must be adhered to, the most important of these is the barrier must be a minimum of 1m from the edge of a pool, and be over 1.10m high: there must be no foot holds, so natural stone walls are a no-no, but a smooth rendered wall is quite acceptable.

Alarms come in two main types, immersion detector or perimeter alarm. The immersion detector senses a fall into the pool and then must activate within 12 seconds. The perimeter alarm works by infra red beams, when broken the alarm sounds. These systems, although approved, are not the best option for pool security and are best used in conjunction with another approved device.

There are many downsides to using an alarm system: some alarms require wristbands or keys to be worn by swimmers, others need a code to be entered which disarms the alarm while people swim. They don’t work under a cover so need to be removed if you want to winterise your pool.

There are also some grey areas. Alarms must be tested monthly, they are susceptible to false alarms and the AFNOR standards state that a responsible adult must be able to respond to an alarm in less than three minutes. So if you’re out shopping or on holiday you can’t respond.

The principal drawback of the immersion alarm is that it’s only activated when a child falls into the water. As it takes only a very short time for a child to drown, the pool has to be near the house for the alarm to be effective.

As with the other options, there are lots of different security covers available, so the main thing to remember is that whichever sort of cover you choose, it must be put back on whenever your pool is left unattended, so a cover which is easy to put on and take off is important, especially if you expect anyone else using the pool to put the cover on when they aren’t using it. A security cover which takes the place of a winter and summer cover for a 10 x 5m pool costs from €3,800. A security winter cover is €1,200. Any cover used to secure your pool must be AFNOR approved (unless you have an alternative form of security).

An abri looks a bit like a greenhouse and they are available in many shapes and sizes, fixed or telescopic. Apart from the price, (this is about the most expensive option) there are many advantages. As well as it being an approved security device, it will help heat the water in your pool, keep out debris, reduce chemical usage and evaporation, and if you heat your pool, it effectively turns it into an indoor pool you can use all year round.

The main disadvantage to fitting an abris is the cost. A low fixed abri, although cheaper, doesn’t give a lot of room underneath and some people find them claustrophobic: high abris, normally up to 3m tall give plenty of space but also need a great deal of room to install them.