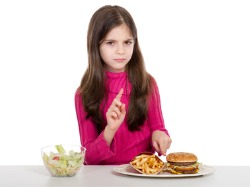 Since the French government revised its rules in October on what could be served in school canteens, vegetarians have expressed concern that six million school children are now obliged to eat animal products.

According to the new guidelines relating to minimum nutritional requirements for canteens serving more than 80 children, there must be a protein element in every meal – this may be meat, cheese, fish, egg or offal.

One possible way around this problem could be for vegetarians who cannot use the school canteen to take in a packed lunch instead. However, these are not being allowed either. The only real alternative is to eat at home.

Not content with having made animal products obligatory in schools, the government also has plans to apply the same minimum nutritional requirements to meals served at canteens in French hospitals, prisons and retirement homes.

The idea was to make sure that canteens were providing healthy, balanced meals that helped support French agriculture. But at the time of writing, nearly 12,000 people had signed an online petition to show their frustration about the way this is to be achieved.