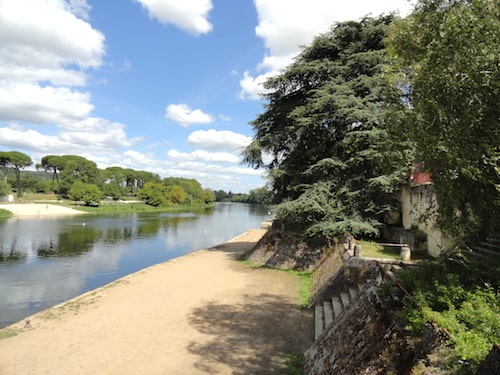 “The beach at Sainte-Foy-la-Grande” I have now been a buyer’s agent in Southern Dordogne close to 4 years and this means of course that over the years I have visited many properties in my territory and helped many people along the way to purchase their dream homes. It never ceases to amaze me really at how similar most people’s idea of a bolt-hole or retirement home in France is, regardless of their budget. What everyone is looking for is space and an outdoor lifestyle, and having lived in England myself for many years in a smallish box and a small garden, I really know where they are coming from.

Of course, what a house looks like is important to us all and stone, character, space and proximity to facilities as well as idyllic locations are always on the agenda. Therefore, I usually get a lot of request to see property in the most beautiful and most well known areas namely Sarlat, Bergerac, and Eymet. Sarlat-la-Caneda known as Sarlat, capital of the Perigord noir grew around an abbey built in the Middle Ages, well restored during the Renaissance, it is nowadays a beautiful town built of ochre sandstones. It is one of the most visited town in the Dordogne and offers great gastronomy, many events such as fairs and markets throughout the year, pre-historic grottos, wonderful gardens and is surrounded by divine villages such as Beynac et Cazenac, La Roque Gageac to name but a few. The countryside is hilly, covered with green oaks and the landscape is punctuated by small villages of wonderfully gorgeous stone houses full of history. The ever-present Dordogne River never flows far. 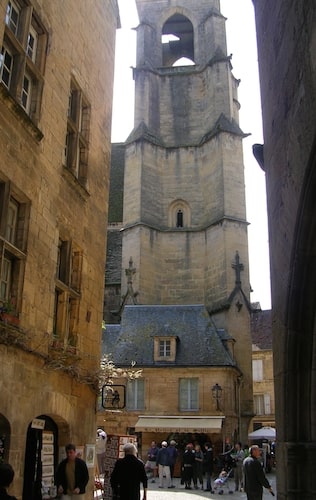 “A view of Sarlat” In terms of access Sarlat is perhaps not as conveniently situated as the larger town of Bergerac, second in terms of population in the department after Perigueux.

The beautiful medieval old town has grown into a modern town with convenient shops and facilities and due to its international airport and the sheer number of cheap flights landing from and taking off to many other European countries, Britain is accessible within a couple of hours. Since the construction of the new bridge, the motorway now only a few miles away enables fast travel to the rest of France. There is a train station linking Bordeaux to Sarlat and around 12600 hectares of vineyards that produce wonderful wines such as Bergerac (red, rose and white), Pecharmant, Monbazillac, Montravel and Saussignac and cover both the northern and southern side of the Dordogne valley.

The multitude of wonderful wine chateaux, farmhouses, plums and apples orchards complete the scenery in an explosion of greens and flowers in the spring. Like Sarlat, it is surrounded by superb villages all steeped in history. Eymet, one of those villages, must be one of the most famous places in Dordogne and is home to a good many British expats who love the area because it is so similar to the English countryside but also because its great climate enables them to enjoy outdoor pursuits many months of the year. Of course, the fact that it is situated near the vineyards of the Bergeracois where good wine is aplenty and cheap might also be a factor! The bastide of Eymet although quite small is well formed and a pleasure to visit. Because of its high proportion of British inhabitants, properties in and around Eymet, have been bought and lovingly restored by the Brits. Naturally, the fact that these areas are the most well-known and obvious favourites, leads to properties in their immediate vicinity to commend very high prices.

“Location, location, location”… this motto has permeated all the property shows on TV for years and it is true that a brilliant house in a poor location will not be as attractive but there are plenty of less known villages around those 3 locations, where you can still find great properties at more reasonable prices. For buyers who have a more open mind and are interested in comparing the full range of possibilities on offer, I recommend they take a look at the area around Sainte-Foy-La-Grande to the west of Bergerac in the Gironde department. Not as well known as the other 3, not as many have bought there and there are still plenty of properties ripe for development and restoration. As well as slightly cheaper property prices, being only 24 km away from Bergerac it only takes 30 minutes to get to the airport.

Sainte Foy la Grande is an attractive 13th century bastide town with half-timbered houses and of course, a central square with stone arcades facing the Dordogne river, which runs through it and even has a beach to enjoy in the summer. Like Bergerac, it is a working town and as such offers plenty of cafes, restaurants, all facilities and its own station. From there you can explore the Dropt valley, which has been largely preserved, unchanged over the centuries. It is close to St Emilion too and the vineyards surrounding it lead to those of the Bordeaux region. Whichever area you chose to settle in in my part of the world you will be sure to find great weather, great gastronomy and a pleasing and relaxing lifestyle.

Previous Article What Came First, the Chicken or the Bearskin?
Next Article The Smallest Art Gallery in Paris

Property finder for South Dordogne with The French Property Finders