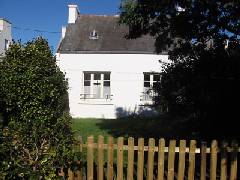 As a family we holidayed in various parts of France for 15 years and always wanted to make the permanent move but were waiting for the children to grow up.

Then, following what I thought was a heart attack in October 2005 (it turned out to be a ‘warning shot across the bows’) made me rethink my lifestyle drastically. September 2006 was our silver wedding anniversary and we had a fantastic round the world trip planned but my wife Debbie suggested that we cancel this trip and instead make the move to France. I didn’t need to be asked twice.

I bought every book written on the subject and spent months investigating the pros and cons of undertaking such a move. I joined various internet forums and investigated the viability of gite rentals as an income. We had holidayed in Plouhinec (29) Brittany that summer and loved the area so started our search there.

I had read about the ‘rose tinted glasses’ scenario whereby you see a house in August with the sun on your back and blue skies above, fall in love with it and buy it there and then – so we duly planned our viewing trips between October and March!

We searched for likely sounding properties and arranged a trip to France. Initial viewings via French estate agents were disappointing to say the least and not at all what we had asked to view! One happy memory of those days was trying to keep up with a French estate agent at speeds up to 60mph down country lanes!

Our hopes were raised when we eventually found a property comprising a large main house with a two-bed cottage attached and further outbuildings for conversion, all located only two miles from the beach. It all sounded perfect. Thankfully, we waited for the survey results before parting with a deposit. The place was rotten with well concealed damp, dry rot, wet rot and woodworm! We withdrew from the sale immédiatement!

We were losing faith at this point but fate intervened when a friend of ours took his car to the local garage in Plouhinec and whilst standing on the forecourt noticed a large building opposite (the old village crêperie) for sale. It turned out to comprise a large four-bedroom detached house and behind it a courtyard with a two-bedroom cottage, a studio flat and various annexes attached to the main house as well as a large garden/orchard.

We viewed it February 2006 and immediately realized the potential and, as a bonus, it was for sale via the local notaire so there were no agent’s fees to pay. Despite all I have already said about ‘rose tinted glasses’ we immediately made an offer and started the buying process which proved totally painless. I even managed to convince the notaire and seller that an Englishman’s word is his bond, thereby avoiding the need to pay any deposit! The surveys only revealed lead paint, asbestos roofs on some of the outbuildings and damp, all of which are perfectly normal on older houses.

At the time my lifelong friend Andy was in the middle of a nasty divorce and needed to get away so I suggested he come with us to France for a few months. I finally moved to Brittany in July 2006 with Debbie was coming over in August after settling the children into their new house in the UK. We moved ourselves by hiring a lorry and enlisting the help of some friends.

When we finally arrived at the house and had a look around Andy began to question my sanity at taking on such a large project.

I must admit that I couldn’t remember seeing the mushrooms that were growing on the lounge walls that were also covered with rotten wood panelling. Neither could I recall that the ceiling and beams had been stained by 50+ years of Gaulois and Gitane cigarettes, the electrics dated from the 1950s, the metre high grass in the overgrown garden, the leaking roofs on the annexes, the 22-year old electric water heater, the rotten windows, the faulty central heating, the staircase that moved when you walked on it and most of all the smell of an old building that had been empty for four years! Damn those rose tinted glasses.

Always up for a challenge, we decided on a plan of action as Debbie was arriving in three weeks. If we could get a bedroom and the lounge habitable it would be a start. Phase One was stripping back the lounge walls, ceilings and floors. The damp was incredible and we sought advice from the locals only to be told ‘all old houses are damp. Learn to live with it and hire a dehumidifier’. We made our own investigations and found a wonderful French paint treatment called ‘Sodi Lithe’ which is basically waterproof so by treating all the internal walls we could keep the damp outside.

After 30 litres of ‘Sodi Lithe’ we had the house dry so Andy then started on a marathon 168 square metre plastering operation across all three properties. We managed to get the house habitable for Debbie’s arrival and we all then embarked on the full blown restoration project which to date has encompassed

We have discovered the joys of French planning regulations (the crêperie is a partially listed building and within 500m of a historic monument) and the apparent impossibility of finding a plumber in France! We have made and gained two planning applications and have a fully functional central heating system

On the plus side, I came to France overweight, diabetic and with high blood pressure. I have lost three stone, am no longer diabetic and have normal blood pressure. After only two days in France we awoke one morning to find a large basket of plums on our doorstep. They were left by our 88-year old neighbour so we reciprocated by returning the basket filled with apples from our orchard. This proved to be the beginning of a wonderful relationship with all of our neighbours and thankfully our 12 tree orchard provides a bumper harvest!

To date we have been invited for drinks and meals not only by each neighbour but by their extended families despite them speaking no English and us speaking only schoolboy French (god bless phrase books!) We are now referred to in our village as ‘Les Anglaises or Monsieur Crêperie and often have a house full of Frenchmen who simply call by to see how we are progressing. The crêperie used to be a focal point of village life and so many people have told us how pleased they are to see it ‘living’ once again!

They have also lent me a trailer for trips to Brico Depot/rubbish dump, helped me at the town hall with the red tape and generally made us feel welcome. We have been taking French lessons (the woman we bought the house from is an ex-language teacher) and can at least now make ourselves understood.

In amongst all this my wife had to return to the UK for a week (daughter problems) and we also had to organise a party, flights and accommodation for 30 people for our silver wedding anniversary party. With the aid of French speaking friends we have sorted the gas, electric, water, telephone, ADSL + taxes.
We are soon to commence the final part of the restoration project, removing two ‘asbestos’ roofs and installing new slate roofs on the annexes which will then be converted into a second bedroom for the gite and a new kitchen for us and we will also completely renovate the studio flat.

In our first season we had 18 weeks bookings – How to book – and the comments left in our online guestbook have made it all so worthwhile. There have been moments during the project when we questioned our decision to come here but in reality any regrets? Should have done it sooner!

* The pleasure on the faces of the locals when they saw ‘their creperie’ being restored to life
* The old men who stopped me in the street to relay stories of the ‘old days’
* Being referred to at the Hotel de Ville as ‘Monsieur Creperie’
* Baskets of fruit and cakes being delivered to the house by the neighbours
* Twice gaining planning consent on a partially listed building
* Our first guests arriving for a holiday and the subsequent comments in our online guest book
* Satisfied guests confirming their booking for next year
* The fact that I am now three stone lighter, not diabetic and have normal blood pressure.

* ‘Sodi Lithe’ is an extremely thick waterproof paint. It smells awful when you apply it but this goes after one to two days. We used 30 litres treating every ground floor wall to a height of 1.4m (we did not use it externally as the walls still need to breathe). Over this we applied vast quantities of English bonding plaster and seven months later have a warm dry house with no damp at all.

* Look around when sourcing products – you never know what you might find locally. Finding French paint very expensive, I was keen to find alternatives to the DIY stores and found a strange small warehouse not far from me – in Treboul, oppsoite Le Clerc – that sells end of lines, bankrupt stock etc.
Here I sourced all of the wooden decking for the garden, all of the decorative wooden window trims, 40 litres of paint and most of the cutlery, bedding etc for the two holiday properties. I now go there every two weeks simply because you never know what he will have in stock!