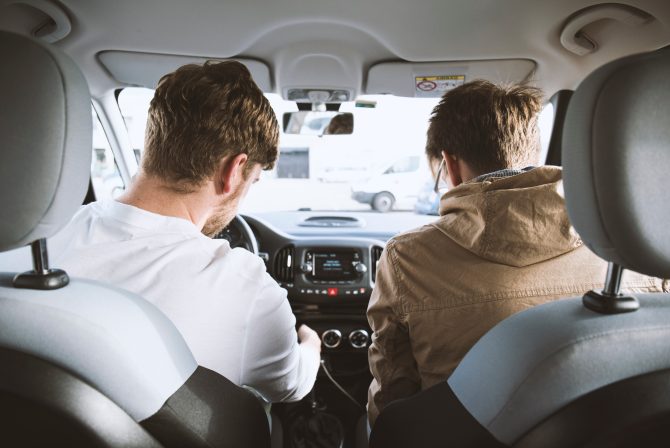 If you drive in France, it’s important to be aware of the many traffic laws and regulations, from speed limits and alcohol consumption to laws regarding stop signs and seat belts. Let’s take a look at some of the most common driving offences in France and the possible penalties.

In France, all drivers – including foreign drivers and rental car drivers – must adhere to the French ‘Code de la Route’. Many of these laws are common sense and will likely be similar to those in place in your own country. However, there may also be some fineable offences which differ to those you are used to, so it’s a good idea to familiarise yourself with the rules before you hit the road. Our article on Driving in France is a good place to start.

The most common driving offences (infractions routières) in France are as follows:

What happens if you commit a driving offence in France?

Violation of any of these rules can result in a fine, points on your licence, impounding of your vehicle, and/or prosecution, depending on the severity of the offence. In France, the penalties faced depend upon the severity of the offence committed, and there are five different classes of tickets (contraventions) that can be issued, with the 5th being the most severe.

The following is a rough breakdown of traffic violations/tickets:

* Classifications are taken from the government guidelines here and may be subject to change.

The penalties for each class of driving offence will depend on the classification level and the type of offence. Typically, all offences will result in a fine and the deduction of points from your licence. More serious offences such as driving under the influence of alcohol or drugs, and accidental injury or death to another driver or pedestrian are likely to also be classed as a criminal offence, resulting in the loss of your licence, a criminal record, and a possible prison sentence.

The below chart shows the fine amounts for the different classes of offence – the ‘normal’ fine amount is generally reduced to the ‘minority’ amount if paid within 15 days, while the ‘increased’ fine is applicable if you fail to pay the fine or contest it within 45 days.

Receiving a speeding or parking ticket in France

Common driving offences such as speeding or parking tickets typically result in a fine and points on your licence. These may be issued on the spot by a police officer or traffic warden, or an ‘avis de contravention’ will be sent to you via post (in the case of the offence being picked up by a speed camera).

The amount of points deducted from your French licence will depend up the amount by which you were over the speed limit:

You can also receive 6 points on your licence for the possession or use of any equipment designed to disrupt or detect speed controls (including those that are included in your GPS – so be sure to disable them). Note that it’s also an offence to signal to other drivers that a speed camera or police check is ahead (by flashing your lights, for example).

Points for other traffic offences

Most driving offences (including using a mobile phone or headphones, driving on the hard shoulder, or dangerous parking) will earn you 3 points on your licence, but some are more severe, such as refusing to give way to a driver that has priority, driving through a red light, or driving at night without headlights, all of which will earn you 4 points. 6 points are issued to the most severe offences such as failure to give way to a pedestrian, driving on a suspended licence, or accidental injury to a person.

Driving under the influence of alcohol

Drink driving limits in France tend to be lower than in other countries, so it’s important to be aware of how much (or rather, how little), you are able to drink if you intend to drive. The limited is 0.5 grams per litre of blood, which for most people would be equivalent to a single small glass of wine or beer. For learners, the limit is just 0.2 g/l.

Drink driving penalties can be severe and all but the lowest level of offence (driving with a blood alcohol of between 0.5g/l to 0.8g/l) may result in a criminal record, seizure of your vehicle, and a driving ban for up to three years. All drink driving offences result in 6 points on your licence and a fine.

Foreign Drivers in France: Can I Get Points on My Foreign Licence?

If you are driving in France on a foreign licence, you will still be subject to fines for driving offences (and possible prosecution in the event of more severe offences), but penalty points will not be added or deducted to your licence. However, if you are resident in France, you may be forced to exchange your licence for a French licence in order for the relevant points to be deducted.

If you receive a speeding ticket or other fineable driving offence when driving a rental car, you will also be expected to pay (this will likely be in your rental contract and may be deducted automatically from your card).

How to recover lost points on a French Driving Licence

If you have lost points on your French driving licence, there are two options available. You can wait until the points are reinstated, which takes anything from six months for a single point, or 2 to 3 years for class 1 to 3, or class 4 to 5 infractions respectively, assuming you do not commit any further offences in that time period.

Alternatively, you can take a driver re-education course (stage de sensibilisation à la sécurité routière), which typically costs €200 and takes two days. Completion of the course will allow you to regain 4 points on your licence.