Starting School in France – From Dorset to Mayenne 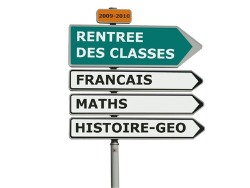 Holly was 12 when her family moved from Beaminster in Dorset to the Mayenne in France. She had been due to start Year 8 in the top set for English, Maths and French, when she received the news that the family was moving abroad.

Two months later, I was sent to a French collège, (comprehensive for ages 11-17). There I was at the bottom of the class, pretending to understand what was said to me by teachers and classmates. With any new school there are changes but when you go to another country, the changes are enormous.

French kids don’t wear school uniform, so we had to buy new clothes that would be suitable. If you eat at school, then there is a big change in the amount of food too. There is a starter, a main meal, dessert, plus cheese and a yoghurt. The days are also much longer, (8am – 6pm) and discipline is much stronger. The French system is also much more structured. If you have finished your lessons for the day, you can go home but only with your parents’ permission. Otherwise, you have to go to etudes (study lessons).

As a shy 12 year old girl, the prospect of facing the French was so daunting that I didn’t sleep for worrying about the next day. It was all right for the first few weeks because every one was making a fuss about me, asking why we moved, where we lived in England and why I didn’t know how to speak French!

By the first Christmas I don’t think that I could speak French fluently; but I could definitely understand what was going on and managed to revise for the continual testing, which is very characteristic of the French education system.

I worked really hard and after six months, was getting on well in all my subjects (except for French)! I had also found myself a group of friends who understood and helped me a lot. Everything is so much easier when you have someone to share the load with.

I passed the year with an overall average of 12 (averages are all important in the French system – these are made up of your marks or notes, which you get in the weekly tests. The average you get each term is used to assess your progress. If you regularly get below 10 then you have to repeat a year.) Unfortunately, my younger brother (10) wasn’t getting on as well as me and had to repeat a year, as his teacher didn’t consider him fluent enough to manage in the sixième (Year 7).

The summer holidays passed very quickly and soon we were all thrown back in to work. As well as trying to keep up with the system, I also had to start Spanish. Funnily or amazingly enough, it actually helped me master the French grammar and the Spanish teacher was very understanding, as he is actually Spanish, and has gone through the same experiences as me.

Although getting an education in France isn’t ‘mission impossible’ it isn’t easy! Once you manage to get over some very big hurdles, then your life regains it’s normal rhythm. Now, I have a best friend who doesn’t live far from me and I’m planning to go to a Lycée in Laval to continue my riding and scientific studies so I can become a vet.

Two years ago we didn’t realise this but there is quite a big English community and I’ve already made friends with someone who breeds Welsh Cobs. I now hope to continue my life in France and hope that it will go as smoothly as possible but at least now I’m better prepared!

9 Ways French Schools Are Different From the UK and US

What Is the Baccalauréat or “Bac” in France?