Will twinning associations be a thing of the past? 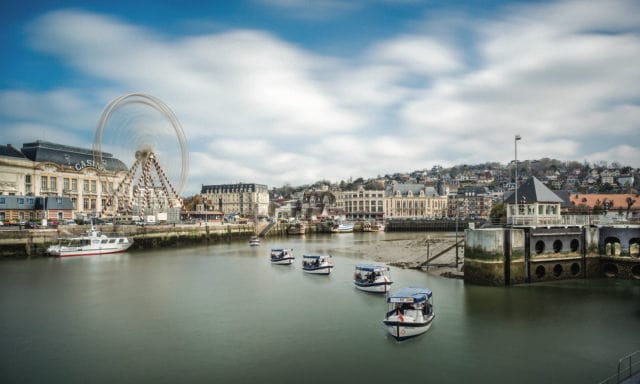 Well before Bishop’s Stortford in Hertfordshire made national news for severing ties with its French twin town, Villiers-sur-Marne in Île-de-France, pleas from twinning associations in desperate need of new members were being printed in local papers around Britain. So you could be forgiven for thinking that the custom of staying with and hosting French families was all but lost… which is why FrenchEntrée set out to find some of the keenest Francophiles this side of the Channel and ask them how they’re keeping numbers up and even preparing to celebrate milestones such as a 50th anniversary.

Bishop’s Stortford wasn’t the first to suggest dumping its twin town (in 2009, Wallingford in Oxfordshire tried to call time on its twinning agreement with Luxeuil-les-Bains in Franche-Comté) and it probably won’t be the last. Some, like Aldborough Twinning Association in Norfolk, are still suffering. In a message posted online in February 2012 it announced that it had suspended its activities. And if volunteers can’t be found to take over the running of Herne Bay Twinning Association in Kent – set up some 20 years ago in 1994 – it too will face a similar fate.

Celebrating its 50th anniversary this year is the Deauville-Cowes Twinning Association, but committee member Peter Ash told us that attracting new members was an uphill task, “In common with other local organisations, membership numbers are slowly falling. We have some 30 members now; 25 years ago there were 60,” he said. Elsewhere, the situation seems to be improving.

Some associations have managed to maintain people’s interest and the twinning of Hailsham in East Sussex with Gournay-en-Bray in Normandy is just one such success story. Ten years after the original charter between them was signed in October 2000 (Hailsham) and February 2001 (Gournay-en-Bray), it was officially renewed in October 2010 and February 2011 respectively.
Although the concept of twinning was originally designed to promote friendship following WW2 while encouraging trade and tourism, the chance to form useful business links has since persuaded many more to sign up. The first ever twinning agreement was signed in 1920 between Keighley in Yorkshire and Poix-du-Nord in Nord-Pas de Calais.

But in Bexhill-on-Sea in East Sussex, the lack of a formal twinning arrangement hasn’t stopped residents from making friendly associations with Merris in Nord-Pas de Calais. At a time when many twinning associations are struggling, Francophiles are still coming together to set up new links with French towns.

Alfriston & Cuckmere Valley Twinning Association (twinned with Veules-les Roses in Normandy) and Burnham Village Twinning Association (twinned with Saint-Denis-de-l’Hôtel in Centre) are just two new groups currently organising their first full calendar of fundraisers and members’ events. Lyme Regis in Dorset and Barfleur in Normandy only signed ‘an official declaration of friendship’ in September, commissioning illuminator Fiona Graham-Flynn to produce the ceremonial charter for the formal signing, which was held at the Guild Hall in Lyme Regis: “As this was an important document, it had to look very special,” she told us, describing how she came up with the design. “Half of the charter was written in French and half in English, on cream goatskin parchment paper with a 15th century black better Gothic hand and 16th century italic script. It also included the town shields from Lyme Regis and Barfleur, which were highly illuminated in colour and raised 24 carat gold leaf.”

While some county councils have been debating the cost benefits of twinning, others have been investing in it. 2012 saw members of the Burnley Twinning Assocation in Lancashire being sent on a fact finding mission to France to learn about community cohesion. Other twinning associations, like those in Salisbury (Wiltshire), have recently succeeded in securing more funding from the local council to help ensure the club continues. Salisbury has been twinned with Saintes in France since 1990.

They’ll be hoping to follow in the footsteps of those twinning associations celebrating some seriously big anniversaries this year. Newmarket in Suffolk will chalk up 60 years, having been twinned since 1954 with Maisons-Laffitte and Le Mesnil le Roi near Paris. As well as Cowes-Deauville Twinning Association, which turns 50 this year, Wisbech-Arles Twinning Club and Friends of Pointoise in Sevenoaks (Kent) are also celebrating a half century of friendship. 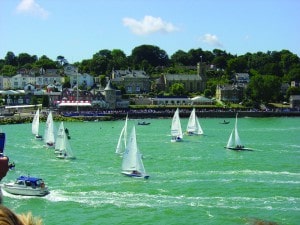 In many cases, twin towns don’t have much in common. However, Cowes and Deauville share the annual Cowes to Deauville Yacht Race. To celebrate their bond as twin towns since 1964, this year will see both a group from Cowes go to Deauville and a group from Deauville go to Cowes – usually, only one party would make the trip over the course of a year. Committee member Peter Ash said he’s particularly excited about Deauville’s ‘Année Anglaise’, being planned as part of the 50th anniversary celebrations.

Of course, 2014 also marks the 70th anniversary of the D-day landings and following other successful commemorative visits by local veterans, Tony Watts (who has been a lifelong member of the Poole Cherbourg Twinning Association) is preparing to take what will probably be the last group of veterans across to the landing beaches. The 40-strong party will be accompanied by two members of the BBC and their five-day visit will include taking part in the official ceremonies on 6 June.

While trips to France and visitors from France are still the most anticipated events in an association’s annual calendar, they have had to evolve over the years with committee members working overtime to find innovative ways of getting younger generations involved.

Andy Simpson and his wife Linda both act as members of the Wortham and Burgate Twinning Association’s committee. He told us that “Getting involved in a local twinning group can open up enormous opportunities for all age groups and interests. We are trying to make our twinning arrangements reflect the common interests of both communities (tennis, gardening, motorbikes) so that individuals can build further contacts on to the formal links at any time of the year.”

In Holbrook (Hampshire) for example, they are promoting links between the local judo club and one in Royan (Poitou-Charentes) with arrangements under way for a friendly competition in Royan this summer. In Cheltenham in Gloucestershire, they are keen to promote opportunities to young people with paid work placements on offer in Annecy in the Rhône-Alpes.
Meanwhile, Wigan (twinned with Angers in Pays de la Loire) has installed a French representative to help locals get closer to their twin town – see www.wigan.gov.uk.

Still more are finding ways and means of inspiring the next generation with eTwinning for schools. Using the online platform www.etwinning.net, teachers can find partners for projects to engage children in the classroom like never before.

Looking around, there are some constant reminders of our French twin towns. Seaton in Devon, for example, renamed one of its streets in honour of its twin Thury Harcourt (The Underfleet became Thury Harcourt Place). Over in Hampshire, the mayor of French twin town Gorron flew in especially to see a brand new development – named Gorron House – being unveiled in Portsmouth in 2011. But the best way to celebrate the joy of twinning must be to keep it alive and carry on the work of those individuals who have been instrumental in setting up and supporting links with France. After all, friendship and cultural exchange are no less important in today’s modern society than they were 25, 50 or even 60 years ago.

This Gift Really Keeps on Giving: Christmas Fair in the Tarn